Inappropriate Mysteries of the Jersey Shore 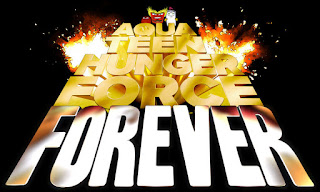 Bean! (Heavily Modified)
Friday, July 31, 11pm-3am
Promo Blurb: Take the roles of animated fast food products or one of their neighbors in this off-the-rails RPG based on the late night cartoon.

I started off this year with something new, in which we had someone play Doctor Weird, someone else play his assistant, Steve, and the rest play the Grant Committee. Passing in suggestions, amalgamating them, and perverting their intent, led to the unveiling of a giant blueberry, which proceeded to eat its creators and roll off to ravage New Jersey.

In addition to the standards (Frylock, Meatwad, Shake, Carl), we had Willie Nelson (not the Willie Nelson), the Cybernetic Ghost of Christmas Past from the Future, and Inignokt. Ghost and Inignokt were selling Speedos door-to-door as part of a pyramid scheme. Somehow this led to a Foreigner Belt mishap which caused a real pyramid to grow up underneath Carl's house. There was time travel, cloning, and a Boxy Brown cameo. The giant, spiked blueberry showed up on the news, but nobody cared. Carl died, but was revived when Frylock attached his head to Ghost's body.

As the neighborhood was destroyed (I think by the blueberry, but I'm not sure I'm remembering it right) Frylock and Meatwad left town.

The players had several good ideas for future sessions, including a pile of cameo characters that players could just grab, play for a few minutes along with their other characters, and then discard. That's in the works for next year, along with some tweaks to the Doctor Weird prologue system.