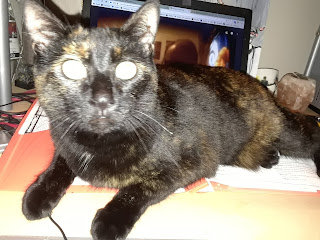 So I had this dream the other night. I was with some people in this old house and we were doing some kind of magic that we weren't supposed to be doing. I don't think my compatriots had real life counterparts. Something went wrong. There was something about Tiamat and a dimensional rift that wouldn't close. The rift was bad, but we were also worried about getting caught by the people who told us not to do this in the first place, so we split up and took off.

Part of the magic thing was that we could fly, so obviously that was gonna happen. Apparently this was around the Devil's Den park in Northwest Arkansas, because I was passing over the hills nearby. I made it to some place in Missouri before they caught up to me. They could fly, too. I was taken to this house that vaguely resembled where I lived as a kid... if you expanded it and twisted it into a maze. There were refugees there too, because apparently the Tiamat thing had become a big deal.

There was some of the usual dream confusion like figuring out where to hang my coat and trying unsuccessfully to get back to a part of the house I had only left a few minutes before. Something about a conflict with one of the people who ran the house. Then a bunch of us decided to play D&D. My alarm went off before the game started, though.

So anyway, I've been kind of itching to pick up my Greyhawk campaign again, but we've got so much going already that it seems like a bad idea. When I visited Arkansas a while back, I also hooked up with several friends nearby and we started a Buffy the Vampire Slayer campaign where I get to play an alternate Slayer. That's a blast. And of course my Icons campaign and Curtis's Icons campaign are still going strong. And Tom does one every once in a while, too.

I'm actually doing pretty well at keeping up with the writing too, but I don't feel like sharing any details. And then there's the conventions.

First, I've gotta get my Carnage events registered. I'm pretty sure one of them will be Star Frontiers. For the other, I've been considering doing a D&D game based on something from one of my books. More likely, I'll just bring Dungeon. Now that I get my gaming fix at home, this business of performing at conventions appeals to me less all the time. Carnage is special though, so I'm not sure. Either way, I have to decide before the end of the month.

The other thing about the end of the month is that Gen Con is right on the tippy-top of next month, super-early this year. And, yeah, unless some kind of catastrophe hits me, I'm going to have fun. It's just that it's a huge freakin' money and time sink happening right when I was starting to build some momentum in both finances and writing. It'll smack the first one right down, especially after what I just spent on cat meds. We'll see about the second.

I don't think I had any kind of point to wrap up here, so, I don't know, go review my books or something. Now that I'm done blogging for a bit, I'm gonna go do some real writing.
at 1:31 PM No comments: