The Weekend of the Doctor

Since I was watching "The Day of the Doctor" on Amazon Instant instead of cable, and had to wait a day to see it, I figured I'd make the most of it and turn it into a full weekend celebration. Starting Saturday afternoon, I watched one story from each Doctor as a warm-up for the new episode.

I got through the first eight on Saturday and finished up the others Sunday morning. Well, technically it was Sunday when I watched seven and eight, but it was Saturday night to me. I don't have any special insights to share about Day of the Doctor. In fact, I go out of my way to avoid analyzing Doctor Who, at least until I've enjoyed it unfiltered a few times. I'm happy to say that it was lots of fun, though.
at 9:43 AM No comments:

Email ThisBlogThis!Share to TwitterShare to FacebookShare to Pinterest
Labels: Doctor Who, MoviesTV

Daydreams at the Bus Stop 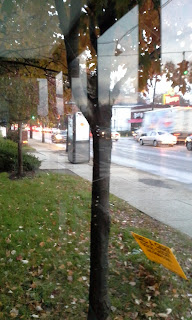 In the midst of trying to cope with something that I can't change, I've found myself occasionally thinking about where I am and what I can do.

... and, after letting it sit in draft form for a week or so, I'm no longer certain where I was going with that. I still want to finish what I'm in the middle of, so that's something.

After all the work I've put into it, including releasing a complete if unsatisfactorily organized version of the game at Gen Con, I'm not going to abandon Qalidar. I'm a little frustrated that, while I was in limbo, someone popped up with a kickstarter for a game that seems to echo several of its concepts and themes, but that's no reason to stop.

When that other game finally comes out, I doubt that the similarities will turn out to be substantial, and I doubt even more that the person writing it is even aware that I exist, much less interested in ripping me off. What bugs me is that, when a coincidence (or maybe a zeitgeist thing) like this occurs, with a nobody like me and someone relatively famous releasing things that seem at first glance to be similar, the Internet loudmouths won't look into the history or even reserve judgement. They'll just do the only thing they're good at.

So yeah, I guess it's obvious this is bothering me more than it should.