Carnage Redux or Redact or Something 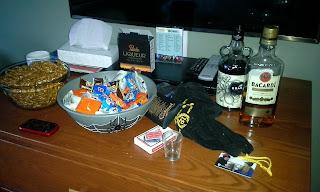 November 3-5 was the 20th anniversary of my favorite convention. I wasn't there for the very first one, and I can't even claim a perfect record since I started in 2009, but I go whenever I can. Carnage is the best.

This blog, on the other hand, is a mess. You should stop reading now. You have been warned.

Usually they have a theme, but this year it was "whatever." Kind of a look back at previous themes, they said. I suppose my Doctor Who game, as a mash-up, sort of fit, but that was just a coincidence. Turned out there was a full moon this year too.

It's been a mercurial, emotional autumn. I'm not entirely sure why. I probably wouldn't tell you if I knew. The relevant part is that this filter has been casting everything in weird shades, Carnage included. The games I was running were mostly outlined, but I started getting really stressed out over the last-minute preparation, stuff I've done plenty of times before, for plenty of conventions. I got grumpy over silly details when we stopped for the night in Syracuse the day before. It was a pleasant trip for the most part but, like I said, weird shades.

Tom drove on the way over, so I used the time to get stuff worked out for my private Thursday game. I had wanted to do more with the mythos established in Conspiracy X this time, instead of just doing my own paranormal thing like last year or trying to explain the whole universe like the year before that. I was fairly pleased with what I put together. We got in with plenty of time to stretch out. Steve was in the lobby and helped us unpack. The view from our room was a conversation piece. Ray would later dub it the Party Patio. 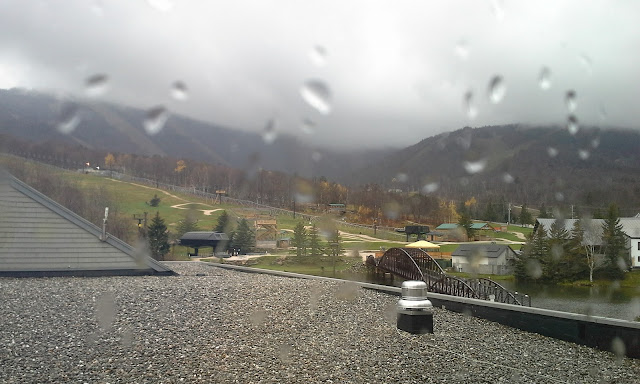 A last-minute convention schedule thing killed the game, so we just did the usual hanging out stuff, messaging friends in as they showed up, swarming from room to room at whatever point felt right. Eventually Tom & I walked with Matt back to his room (one of the condos) and then some time after three, Tom decided he wanted to stay there and drink some more. Matt is nocturnal, and he seemed to be okay with it, so he walked me back to the hotel and I slept while he returned to his waiting Tom. None o' my business what makes those crazy kids happy. I don't think it's, y'know, constitutional, but whatever.

Friday was the official opening day. Somehow I got out there before the registration desk got crowded, or maybe it was just running smoothly the whole time. After that I fussed around, did random stuff, stressed over what I was wearing with the coat to my Doctor Who game (I had packed several alternatives), and moved things around in the room for, you know, reasons. I also reserved a room for next year and tried to find out what happened to my missing credit card. Anyway, there was a game later. 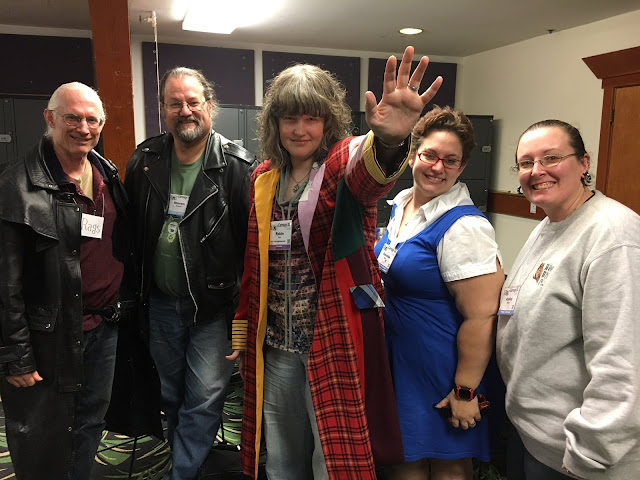 I didn't actually play the Doctor, but it was my coat so I got to wear it for the picture. I was way nervous about wearing the silly thing across the hotel. I don't normally do stuff like that. Tyler's gleeful giggle-squee when he saw me was just what I needed, though. That's Rags and Steve on the left side of the picture. I don't know the two on the right in real life, but they were Janet and H.G. Wells in the game. It was a great group, but they almost always are. I was totally flying.

Tom was in a game. Cthulhu, I think. Seems like we started out in Steve's room and talked about how gaming was the best way to get to know people because, personas and stuff, wandered off to Scott's party, and so on. I brought the overcoat with me everywhere. I was a little bit zoned out at first and couldn't get into the socializing, but finally decided, hey, I'm here to have fun, so why can't I? So I gulped down... I don't know... it had some melted ice in it, so there probably wasn't all that much whiskey. Managed to impress Matt, at least. Or worry him. It also kicked in the human stuff so the party was fun. Then we were outside talking about dreams and things. Bound to happen eventually, right? Tom's game ran late, so I don't think I saw much of him.

So anyway, Saturday happened. I found the credit card I thought I'd lost right when I was about to give up and report it. Then I was stressed again about the Farscape game. In the course of writing scene outlines mostly on that little pad of hotel paper and filling out character sheets, I realized why I always get stressed over these games, even though I know I'm going to enjoy them. I love playing role-playing games. I especially love coming up with scenarios and running them. I just really, really hate starting them. Once that's over, I'm good.

But it was a great Farscape session. The nebari mad scientist played up to my standards, which I didn't expect. Because one guy showed up who didn't know the show very well, I even bent the plot a little to put him into a Crichton-like position. The guy playing the sheyang had written down a bunch of Farscape slang and worked it in throughout the session.

Tom joined up this time. He had been in a game earlier, but it was a train wreck. There were also  some other guys Steve knew, and Rags. Matt had appeared briefly during my game, then looked confused and disappeared again. The rest of us went back to Steve's room, where they all talked about beer forever. Like, all the stuff about types of hops and how much malt and I just kept seeing myself screaming and throwing furniture around until they choked me into unconsciousness. I guess I could have tried to change the subject, but I just kept hoping it would get better. Eventually it did, and then we wandered off to the big party.

Matt still hadn't shown up, so I texted him and, before it even got to his phone, he appeared at the door. I think he might be Satan. Or one of Satan's interrogators. I'll have to be more careful about squawking his name in the future. Anyway, circulated around the party a bit, talked to Scott and Andre, talked to Petra, who strongly recommended being carried on a litter, talked to this weird flying centipede thing that came through the yellow gateway. The rent-a-cops came a couple of times to shush everybody, and eventually it was time to go.

He-Who-Must-Not-Be-Named and I returned Steve's coffee cup, talked to him for a bit, then wandered around looking for someone else to pester, but there didn't seem to be any more open doors. There was a gnarled tree that I could have taken a picture of but didn't. I always start these things out planning to share insightful comments on the weekend's games or art or something and I always end up rambling on about who I hung out with and where. Oh well. Insight is overrated. Anyway, Tom and I packed up and left the next day, and drove to our usual stop in Syracuse.

The next day we did a little exploring. Saw some woods that still had pretty leaves, and a lake, and found a really good Mexican restaurant. 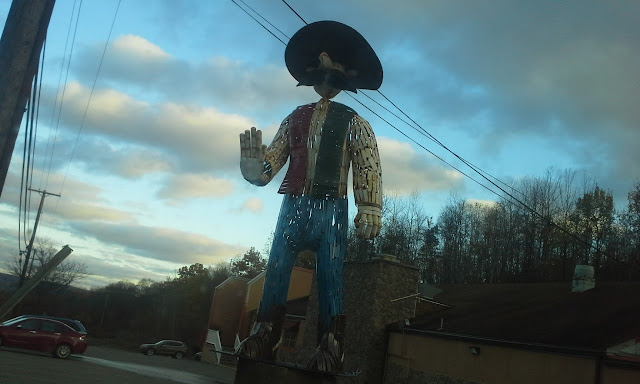