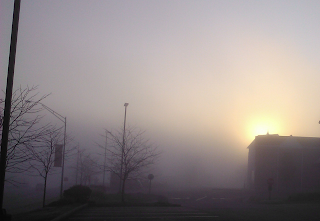 My October was muted and dreamy, as it should be. While Halloween was a factor, lots of those dreams were also swirling around my plans for the upcoming Carnage 14. Despite some anticipated hitches, the preparation fell together rather easily. In between, I had also been entertaining myself by "checking in" on Facebook at various graveyards, shovel stores, occult bookstores and, once, "the Pawtuxet bungalow." I don't think anybody ever noticed but, in some ways, that made it even funnier. Have I filled in enough text to get past this picture yet? The ideal place to take it from would have been a little ways back, but since that would have put me in the middle of a busy street, I -- oh, here we are!

Wednesday
We took off early because Mike & Kelly were flying into Syracuse in the afternoon. I spent some time polishing off my notes and then sat back to enjoy the ride. Nothing much of note happened on the way, landing the four of us in a quaint old building in Little Falls, New York after a fancy dinner in a restaurant that looked like something out of The Godfather. A clock mysteriously fell off the wall. Tom has since decided that it was a train. Seems likely that it was something like that, but nobody heard a train at the time, and there hadn't been anyone nearby when it fell. Anyway, you can read all about the not-quite-spooky incident and the subsequent reenactment over at his blog. Apart from some unsettling dreams about demonic possession, I had a good night. 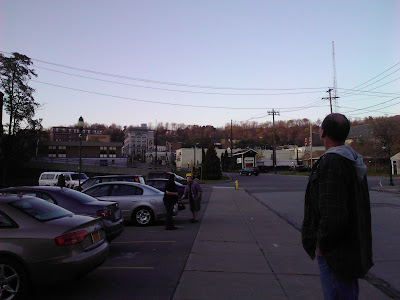 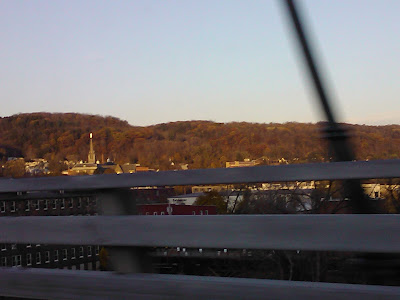 Thursday
I love the drive through New York and Vermont, but there's not much more to say about it than I've said in previous Carnage posts. At the resort, we checked in, got settled, and headed out to the lobby to hook up with our friends, after which we had a reunion dinner at Leda's. But all that is just the introduction. It's how you get to Andre's Thursday night horror session. This year he was back to good old Call of Cthulhu, none of that fudgey stuff. As before, it was in the closed-off pool room, complete with professional lighting and sound effects, and this time there was even fog. The scenario, Horror at Harwicke Castle, was great. I'm not allowed to say much, but there was a haunted castle with buried secrets and lots of people died. What more could you ask?

The game ran until four in the morning. The lights were all out, so I went to the room, just assuming Tom had moved on as well. When I got back and he wasn't there, I sent him a text message, only to hear the buzzing of his phone on the counter beside me. Oh well. 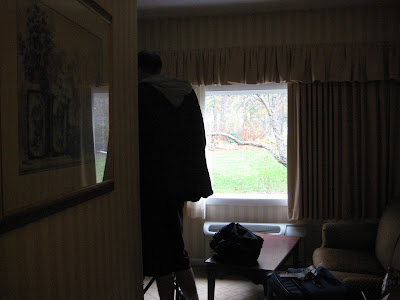 Friday
I didn't get much sleep that morning with everyone bustling around and Tom showing up and announcing that he had been abandoned on a bench in the bar, so I eventually gave up and got moving. That afternoon, I played Mindwar, a psychic spy/conspiracy setting for Dream Factory, a collaborative storytelling style RPG run by its creator, Benjamin Grant. It was a cool introductory scenario, and I had lots of fun being sneaky and manipulative.

In the dinner break, I found my way to the bar, chatted with lots of people, and finally got a pizza with Monk, Kelly, and Tom. Then it was off to bust ghosts (or rather, marching cards, a grabby mirror, and a gigantified slacker) in Tyler's Girl in the Looking Glass adventure. There was a particularly troublesome multi-part ghost at the end, but my lack of sleep was catching up to me by that point so the details are kind of hazy. Something about an ecto-unicycle. The part I was awake for was lots of fun, though.

I stopped by my appointed midnight game to let the GM know I was dropping out, and then went to bed. Of course, I knew I'd be missing at least one great party somewhere, but I was wiped out and needed to not be frazzled when I ran my game the next day. 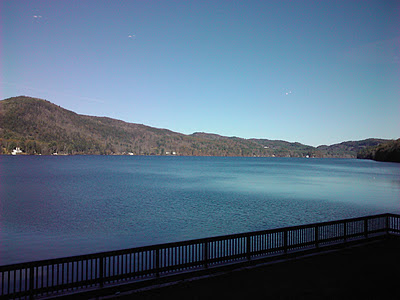 Saturday
After a good night's sleep, I got out the door in time for the lunch-mingling and ate something from the hotel's concession stand. We picked up on some sinister scheming that Tom and Andre had started the night before about a Troll Hoot style get-together for horror games. Other chatter and socializing meandered about. Everyone seemed to be having a good time so far.

There was a bit of shuffling with my event, but it was all handled smoothly. Apparently, somebody glommed up a bunch of tables without telling the organizers that he was going to need more than one, so I and several other GM's were moved into a different room. All my registered players found me and, since I had five out of six seats filled anyway, I really can't complain. This one was called Throne of Gorgudai, but it was really part one of The Other Tower, which you can read all about with a wee clickety-click.

I'm a little fuzzy on the dinner mingle-break. I think that's when I got this picture of Ray hosting a tea party, but maybe not. Mostly I was thinking about my next event. 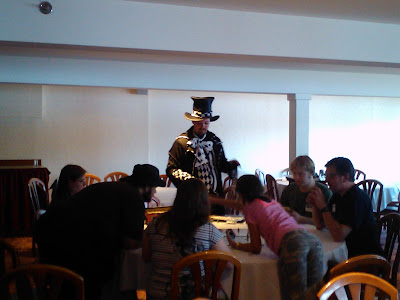 The Other Tower (part two) started fast. In addition to the three guys who pre-registered from the previous session (Steven and John had dropped out to play in that barroom brawl thing - apparently the GM gives you money) I had four last-minute joiners, one of whom I had to turn away because six is really all I can manage. So anyway, full table, and I decided to deviate from my plan a bit. Instead of handing out the fresh characters, I used some of my spare copies. Two of them were the same character as one who had dropped out, and one of them was a copy of someone who stayed in. If you want to know why this made sense, you'll have to read the summary.

The players for both sessions were great, and gave me a lot to build on for future sessions. Also, I got some good rules feedback for the game. Overall I'm very happy with the way it's going and can't wait to get on with the next one. And let me just say one more time, the players were awesome. I'll have to make sure that Carnage always marks some kind of milestone in the story.

I had finished up a little early, so I grabbed my laptop and made notes about the events in the game, hoping to remember as much of it as possible for the summary later. Eventually it got close to midnight, so I wandered over to Andre's Cthulhu Cognac Cave and joined the party. Naturally, Tom was already there, and told me about some girl who sat on his lap and broke the camera. Luckily, the only problem was that the battery door was open, and I was having too much fun to fuss about people sitting on Tom. Anyway, I was there till three or so but I'm not really sure when the party ended.

Sunday
Well, you know. Sunday. Checked out, sat around, did an interview with Tyler which I dread hearing because I'm terrible at these things. When I stopped to talk to Ray, he informed that he was the hot chick. If you've been paying attention, you'll probably get the joke here, but I failed to make that connection at the time so all I could think to say was, "yes you are." Chatted some more, said goodbye, went outside, came back, said goodbye, left for a farewell dinner at Leda's, came back, said goodbye. But finally (sigh) we really did leave and start the long drive through the mountains to Syracuse.

Monday
After a somewhat confusing breakfast, we investigated a few potential horror hoot sites, including the Maplewood Inn, which was such a nice place that it got Tom thinking about turning it into a real convention. At the Knight's Inn, we were fully educated on an exciting feature called, "standard rooms." Before long, it was time to return Monk and Kelly to their home somewhere inside the Syracuse airport.

Tom and I punched in some new instructions to our trusty travel guide, Mavis, and were led through Ithaca to good old Tag's. 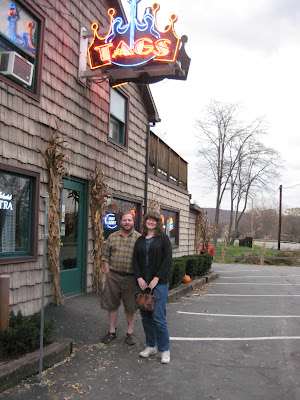 We sort of found Tag's by accident after our first Carnage, and it's been a regular stop ever since. After yet another tasty meal accompanied by Shock Top Ale, we were about to head out when Tom spotted a guitar signed by Foreigner and wanted to take my picture next to it. 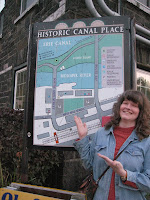 Carnage in Wonderland was awesome. It was a fun trip with lots of good friends and great gaming. I'll be updating this blog shortly with all the details, but Tom, speed-blogger that he is, has already got part one of his version up and able, so remember, don't believe his lies.

I can't get over how well the two-part pilot episode of the Walk the Spiral went. I managed to pull off one of my best GM'ing runs ever, but I also had two groups of excellent players without whom it could never have come to life. Like I said, more about that is coming real soon.
at 11:12 AM 2 comments: