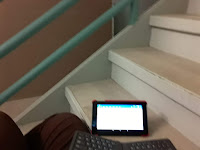 Here's a little bit of work I got done while hiding in the basement today.

As they neared the middle of the city, the webs became more prominent. Up ahead, a huge spire towered over a circular plaza. A round symbol was painted on its lower reaches in red and gold. The swirling, self-mirroring yin-yang symbol stood out starkly against the otherwise featureless black stone. She had seen the symbol with less garish colors on several occasions before, but most recently in Timber, on Shao Tsang's tunic. The other buildings in the circle were all covered in webs.

Kala and Oeklor were checking every corner now, starting at every echo. They drew their swords. Kala absent-mindedly traced tiny circles with the point of her blade while Oeklor kept switching his grip back and forth from forward to backward. Looking more closely at the webbed-over buildings around the circle, they found human-shaped bulges in the fabric. Each of these had one or two smaller, rounder bulges near it.

Speaking barely above a whisper, Kala said, "I think you were right. This was a--"

Oeklor poked his sword into one of the little round bundles and wiggled the blade.

"--Bad idea." Kala grimaced and backed away. Little black shapes squirmed around the blade and the cut began to widen on its own.
at 9:14 PM No comments: 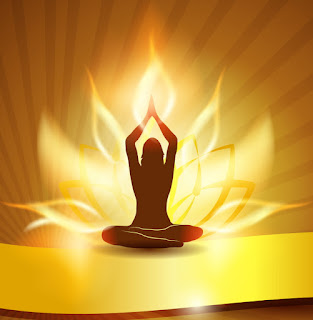 The holidays came and went. Jessica and Alison exchanged gifts (at Ali's prompting) but, with the threat to Dazzler's life gone, they didn't otherwise stay in touch. One morning in January, Dazzler stopped by Harry's office to check in on a job. Harry was closing up the office for the day. He was disheveled and had obviously been crying, and revealed that Hamilton Glatt (known to Dazzler and the crew as "Beefer") had died. He said they had tried to reach Alison, but Cassie said she wasn't answering her phone.

According to Harry, Glatt's body had been burned black and there had been "some kind of flower" drawn on his spine. Ali took him out for a drink or ten, made sure he got home, and proceeded to get even more plastered. Eventually she called Jessica, intending to ask for her help. She wasn't communicating very well, so they both just got mad and hung up. Alison went to Jessica's apartment around 5:30 AM, but Jessica hadn't gotten home yet, so Ali lasered BITGCH, with the "G" crossed out, into her door and passed out.

Eventually they hooked up at Ali's place in Chelsea. Jessica did some research while trying to sober Alison up, noting the irony while she ordered Chinese food. Alison concocted a horrible mixture of champagne and wine coolers and kept drinking when Jessica wasn't paying attention. She called Danny Rand and, over Alison's shouts of, "Is he seeing anybody?" asked for his help with the mysticism-related elements of the case.

Meanwhile, using some "borrowed" passwords, Jessica found the crime scene photos. As Harry had said, the body was completely charred and shriveled up like a mummy. Along the spine were five identical symbols in white ash, with two more on the head – one on the back and another on top. The figures were shaped like flowers with lots of tear-shaped petals.

Danny showed up at about the same time as the food and identified the flower patterns as lotus. He confirmed Jessica's suspicion that the arrangement matched the seven main chakras and mentioned that he had come across references to similar psychic vampirism while researching ways to undo Davos's theft of the Iron Fist.

Jessica made sure Ali ate something, then asked Danny to look out for her while she followed up on an idea. The two went to a nearby bar, the Lava Lounge, where Ali subconsciously used her emotion-shifting aura to make everyone want to dance. Danny resisted the lightshow, but danced anyway. Then her thoughts drifted back to her dead friend and she accidentally made everyone else sad.

Meanwhile (I love saying "meanwhile"), Jessica got a ride south and then jumped from ship to ship to eventually land on the artificial island prison known as The Raft. The prison itself was windowless concrete with only one entrance. Well, two if you count the yard in the middle. Avoiding searchlights and patrols, Jessica crept closer and jumped to the roof, then dropped quietly into the yard. She convinced a guard that she was a civilian inspector who wandered off and found Davos's cell.

Davos was surprisingly accommodating and told Jessica about a series of similar murders in K'un Lun. He laughed as he told her that she was pursuing a hydra. In the incident in K'un Lun, the Hydra was group of telepaths working in concert, led by a controlling mind that never physically manifested. He asked for dust from the collapse of Midland Circle in return for his help.

Jessica went back to Manhattan and eventually Dazzler passed out. While that might seem like a decent end, the truth is that we expected to play a fair bit longer than we did. So some time passed, and a mostly-sober Dazzler put the moves on Danny, who mentioned earlier that he and Colleen were kind of on the outs. I think we were cutting back to Jessica when real life stuff ended the session.
at 3:28 AM No comments: