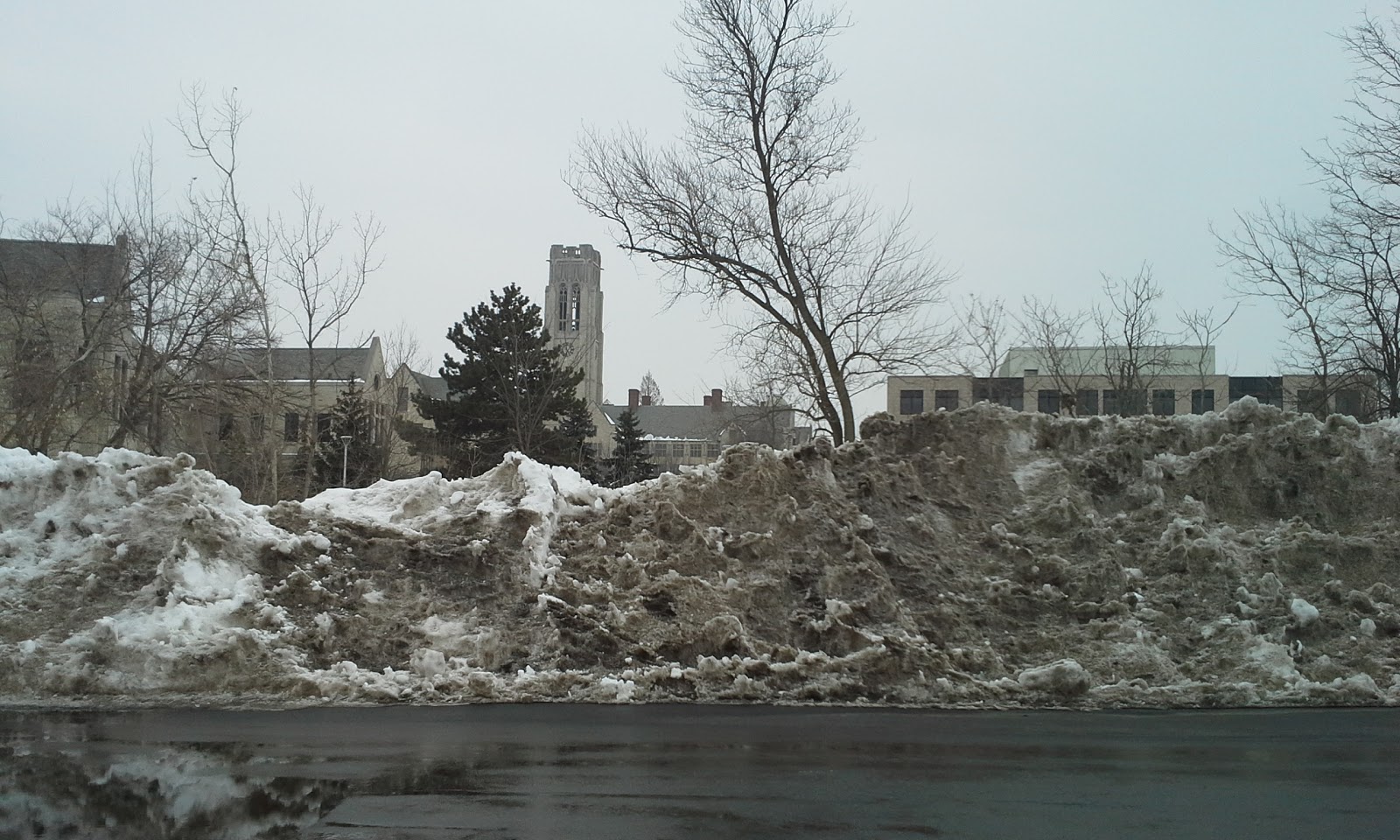 Also, never tell me the proper way to capitalize words in a title.

This past weekend was BASHCon in Toledo, one of my favorite gaming events. I think there are several reasons for this. One is that we're getting a little bit of a group going there so, despite the kudzu-like incursion of Pathfinder organized play events, we can all count on enough friendly faces to run a good game, as long as we coordinate a little bit. It's almost like a hoot that way, but we still get to meet new people too. It's also a short trip which, combined with the fact that it only runs Friday night through the weekend, means that I don't have to take any time off from my day job to enjoy the whole thing. Throw in the cozy venue and the fact that we've never treated it like a "work" convention, and you get a bright couple of days in the middle of winter. 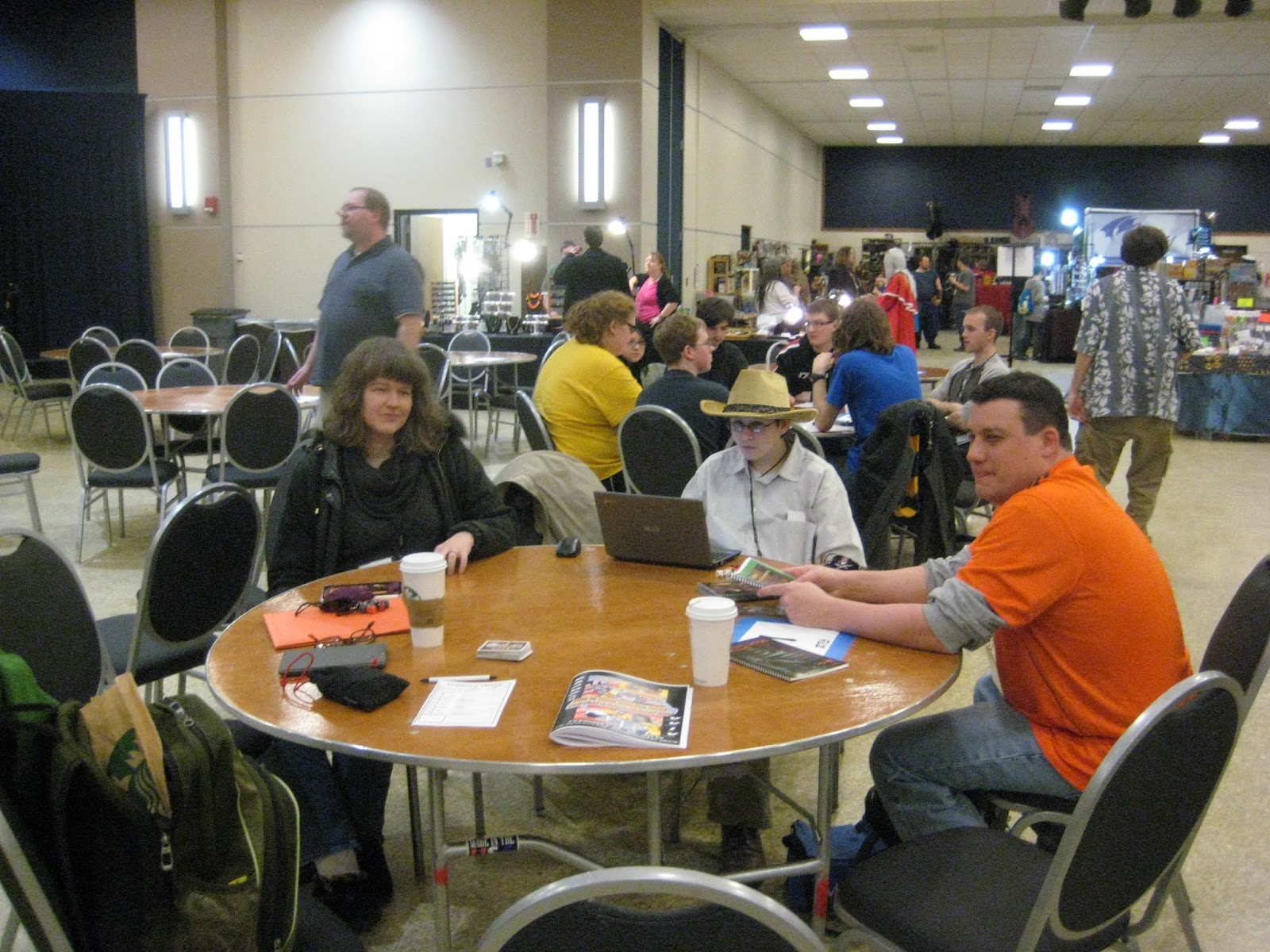 Tom picked me up directly from work and we were off to Toledo in high spirits. Despite a formidable wall of ice, we got into the building and registered for the con in record time. You never know how it's going to go because BASHCon is run by a rapidly cycling crew of students, but this year they really did a good job keeping the lines moving.

The official theme for the year was "a game against evil," which I think is some sort of pulp reference. It reminds me more of Sherlock Holmes' "the game is afoot." Maybe that's pulp too. I've never been clear on exactly how far the definition of pulp extends, or if it just covers everything old timey. I thought it had something to do with cheap paper, but that qualification doesn't seem very reliable, either. Anyway, we ignored the official theme. Take that, linguistic ambiguity! 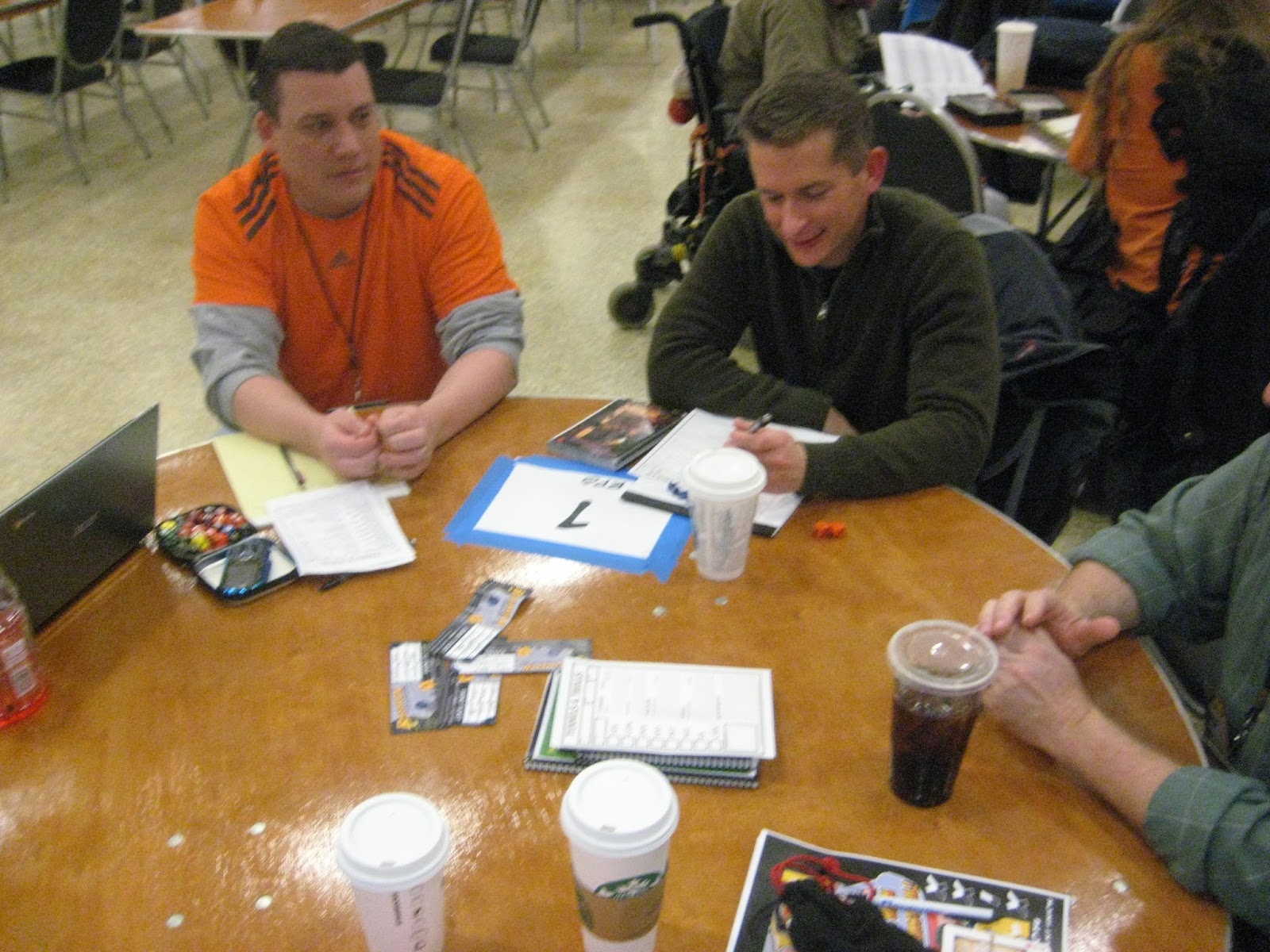 Up first (after dinner at Phoenicia) was one of the two main BASHCon events for me, Tom's Friday night Tunnels & Trolls game. Jerry and I have been playing our regular characters in this for years, along with Liam and a shifting entourage of frequently short-lived co-delvers. This year, we were joined by a new member, Dan. Tonight's adventure was the first example of this year's "never tell me the odds" title. We held out against wave after wave of the goblin hordes before finally surrendering, only to magically charm their king later. None of this helped us much against the demonic fungus in the caverns below, but we came out with lots of treasure and XP, and nobody died. 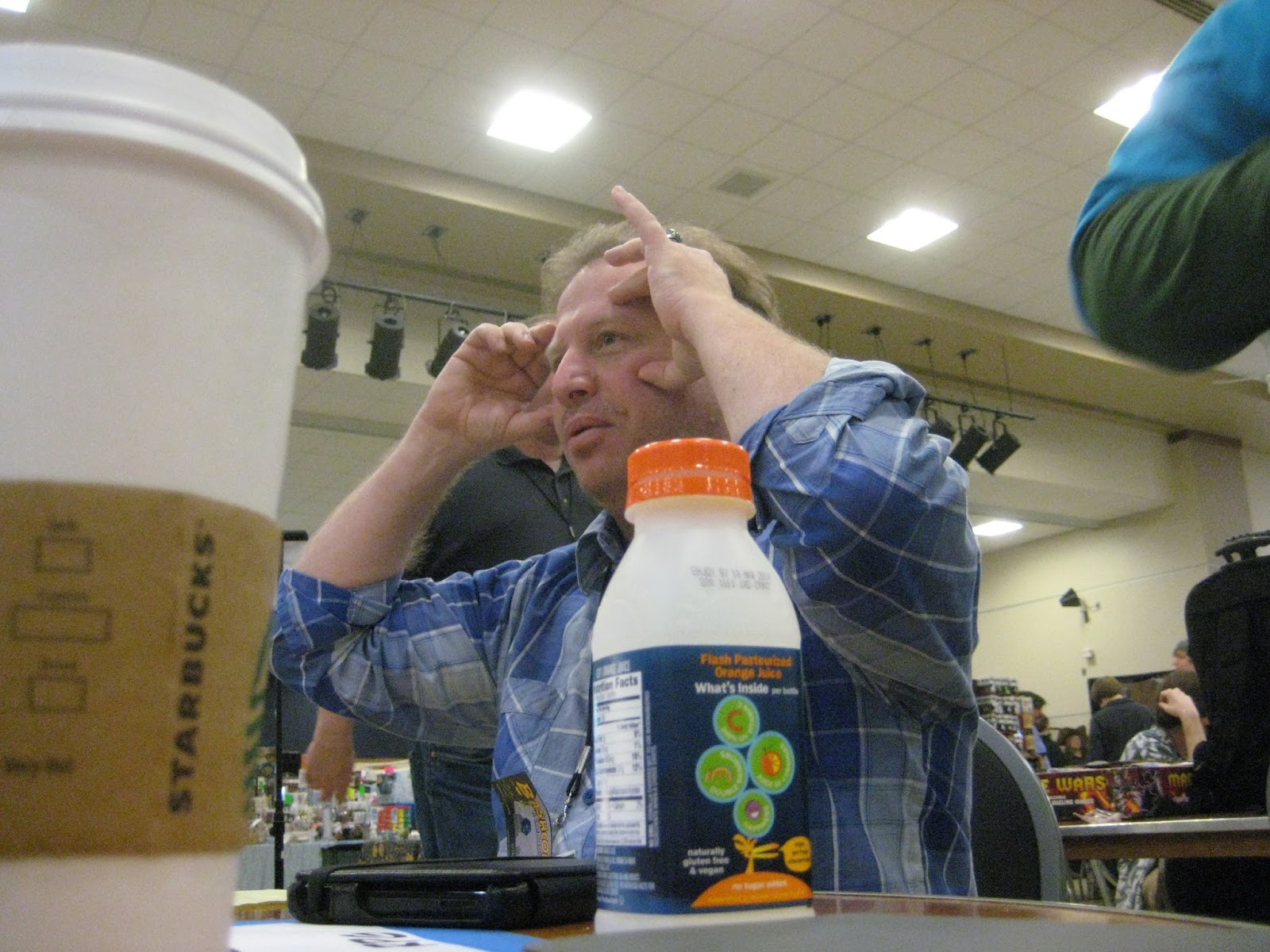 Saturday morning, I joined Tom, Paul, and a guy whose name I forget for a Glow playtest. Props to that guy, though, for taking a chance on something new. Character generation was a hoot. I ended up with a shaggy, loose-skinned mutant with long floppy ears. A lot like a bipedal basset hound, except for her four fluorescent green slit-pupil eyes. She and her also-many-eyed friend wandered across post-apocalyptic Cleveland and met a robotic museum curator (Paul), who aided them in a comical but ultimately successful attempt to assemble and load a machine gun to fend off some three-wheelering thugs.

Over lunch, we ended up with a few too many wargamer/military trivia experts at the table. They seemed like nice enough people, but the conversation kept droning into things like the capabilities of different kinds of tanks and how silly it was that the Greezeltact 37 supplement failed to account for the fizgraggled barrel of the tlorogastic blargleflarglegun. It's all good, though. I'm into lots of things that bore other people, myself. For example, Tom didn't seem to appreciate it when I pointed out in the middle of his T&T game that moss is not a fungus. 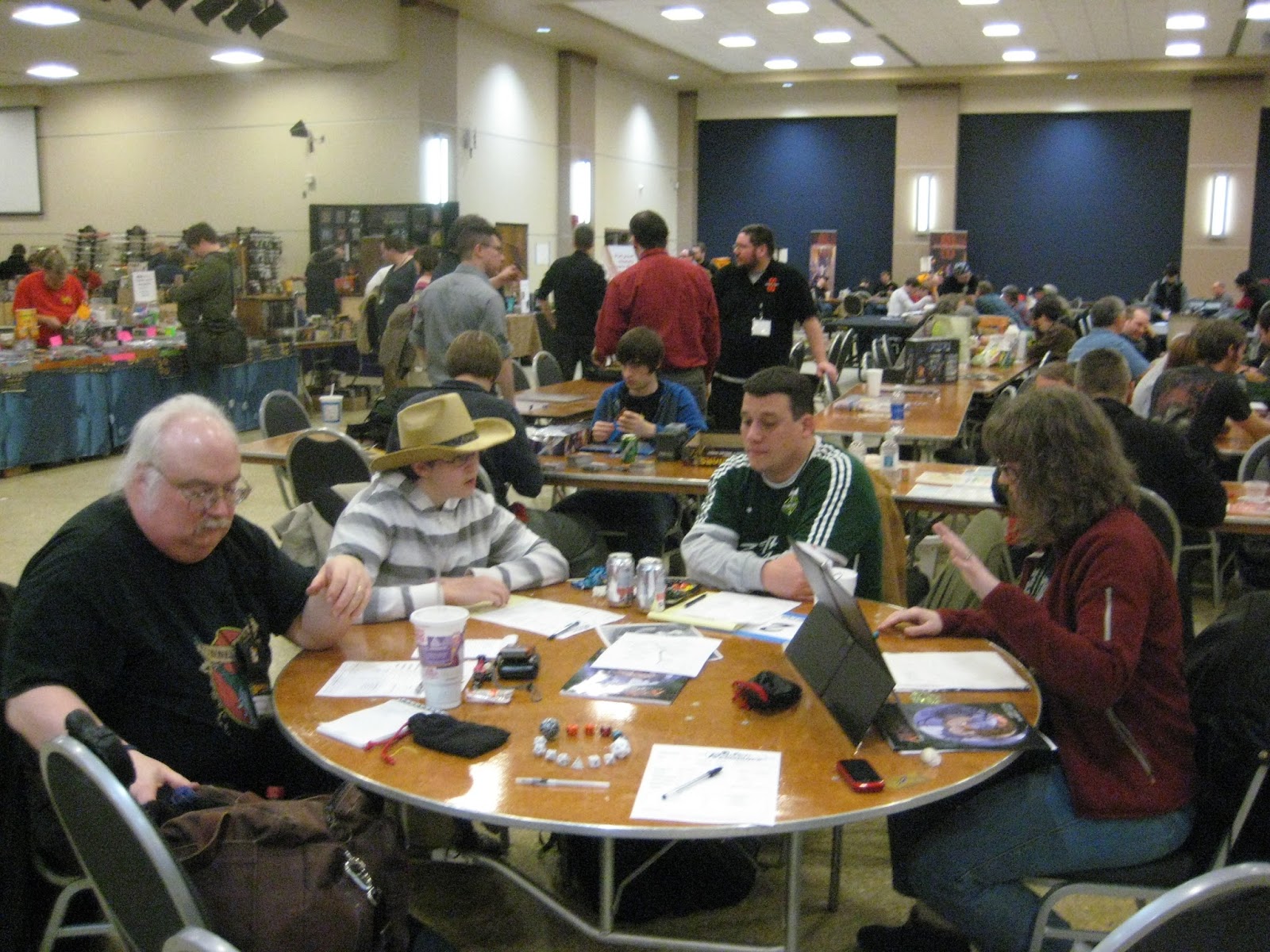 Next up was Qalidar. I ran "Liberation of Katun" for Jerry, Paul, Liam, and Tom (whose scheduled Wobble game was cancelled because there was only one player). I providentially stumbled upon the useful tactic of starting the game with a short fight, so they moved on into town with a better idea of how the mechanics actually work than they might otherwise have had. They were a little too efficient at bluffing their way into the main facility, and missed out on the resources to be had by scouting the town, so they were pretty quickly cornered and about to be exterminated by the deadlander guards and their photosonic pistols. They came up with some clever improvisations at the last minute though, and managed to not only escape with their lives, but blow up the power supply. Not a complete success, but they did some damage and they all got out alive with useful information and a couple of spiffy weapons. 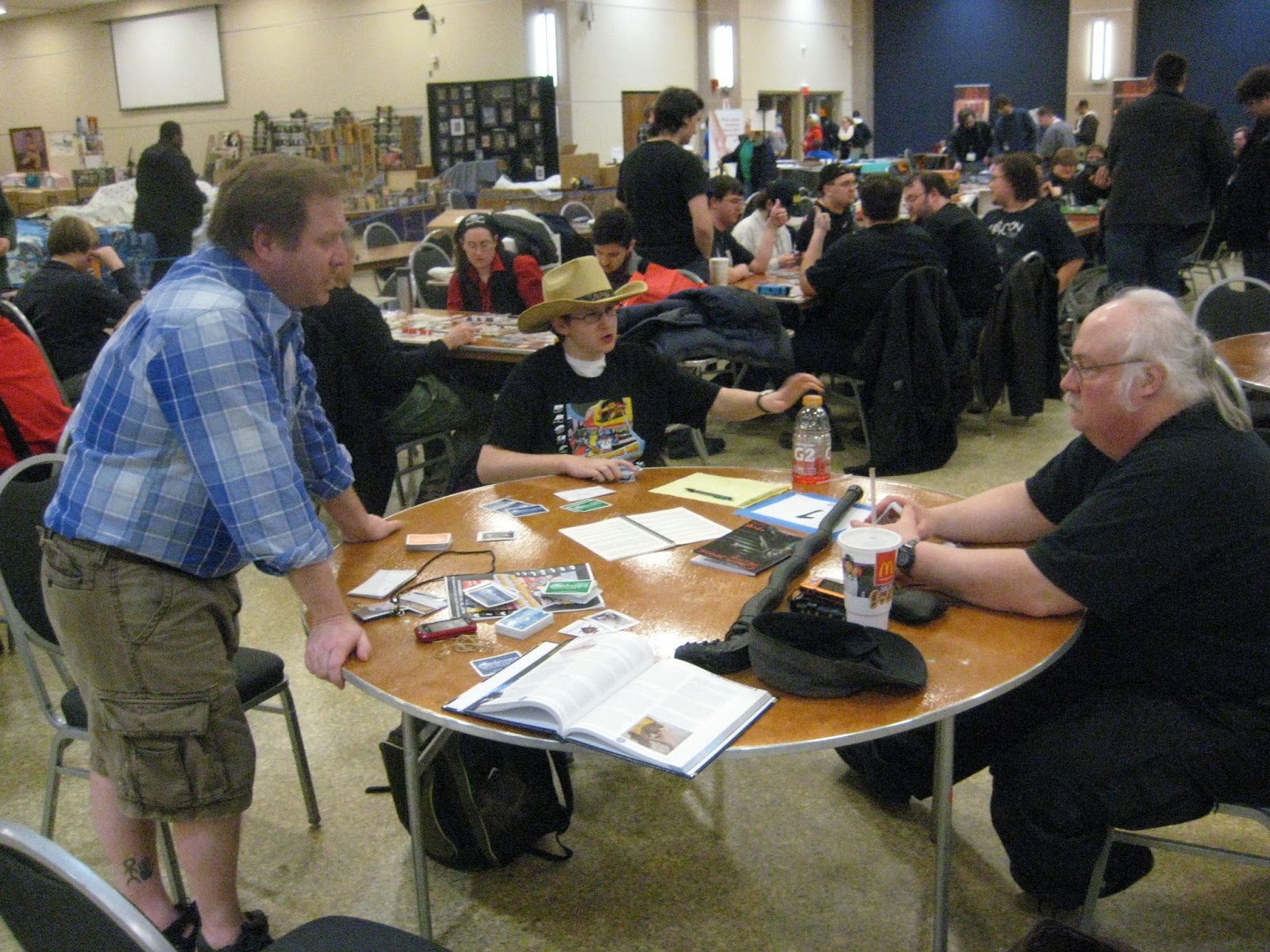 I didn't have anything scheduled for the evening. Neither Tom nor Jerry expected anyone to show up for their games (Crawlspace and T&T), so there was talk of grabbing a bite and turning in early. As it happened, one guy showed up for Jerry's game and two for Tom's. I sat at the table and read my new Doctor Who supplement while they played. Jerry ran his guy through a solo instead of the adventure he had originally planned to use. We did grab that bite to eat after everyone was finished, though. 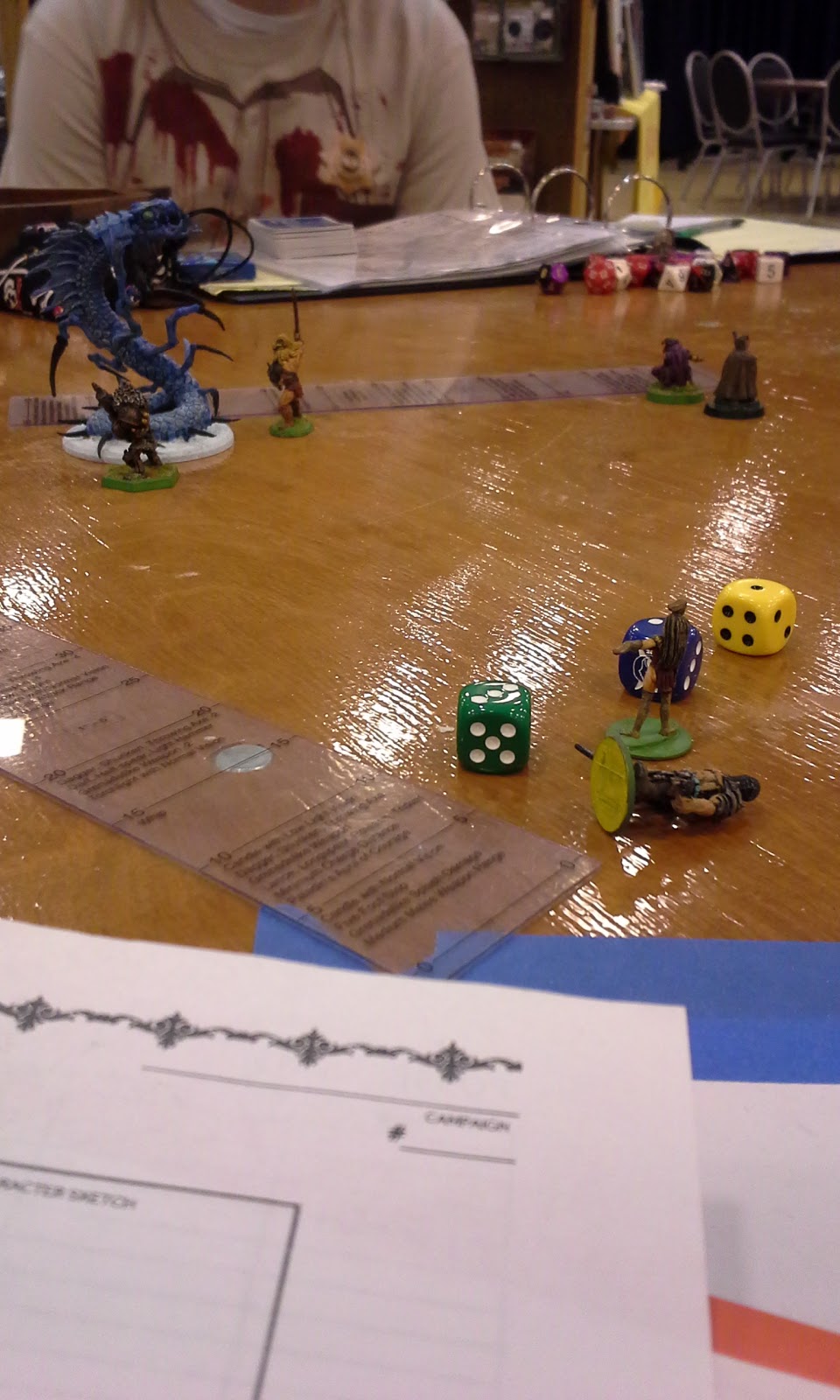 Checking out from the motel Sunday morning, we ran into Paul on his way home and said goodbye a second time while snow glorped all over everything. This brings us to the second game I always look forward to at BASHCon, Jerry's Dungeons & Dragons (hybrid 1st & 2nd edition AD&D) game. This was, as expected, a lot of fun despite (or maybe because of) some bickering and fisticuffs between the two barbarians. Later, after magically slowing the frost giant, I almost got mashed by an ice troll because of an ill-considered teleport, but managed to keep the monster at bay long enough for the rest of the party (minus the two halflings, who just stood around waiting to spring an ambush that was never going to happen) to finish off the giant and help me. We got ahold of the Hand of Vecna and decided that next year's adventure would be about our quest to properly dispose of it.

Then there was Mexican food and a fishbowl-sized margarita. My convention loot included The Time Traveler's Companion for the Doctor Who RPG and a set of iridescent dice. It may not sound like much, but it's not a bad haul for BASHCon. They have some good regular vendors, but it's not anywhere near big enough to be a shopping con. 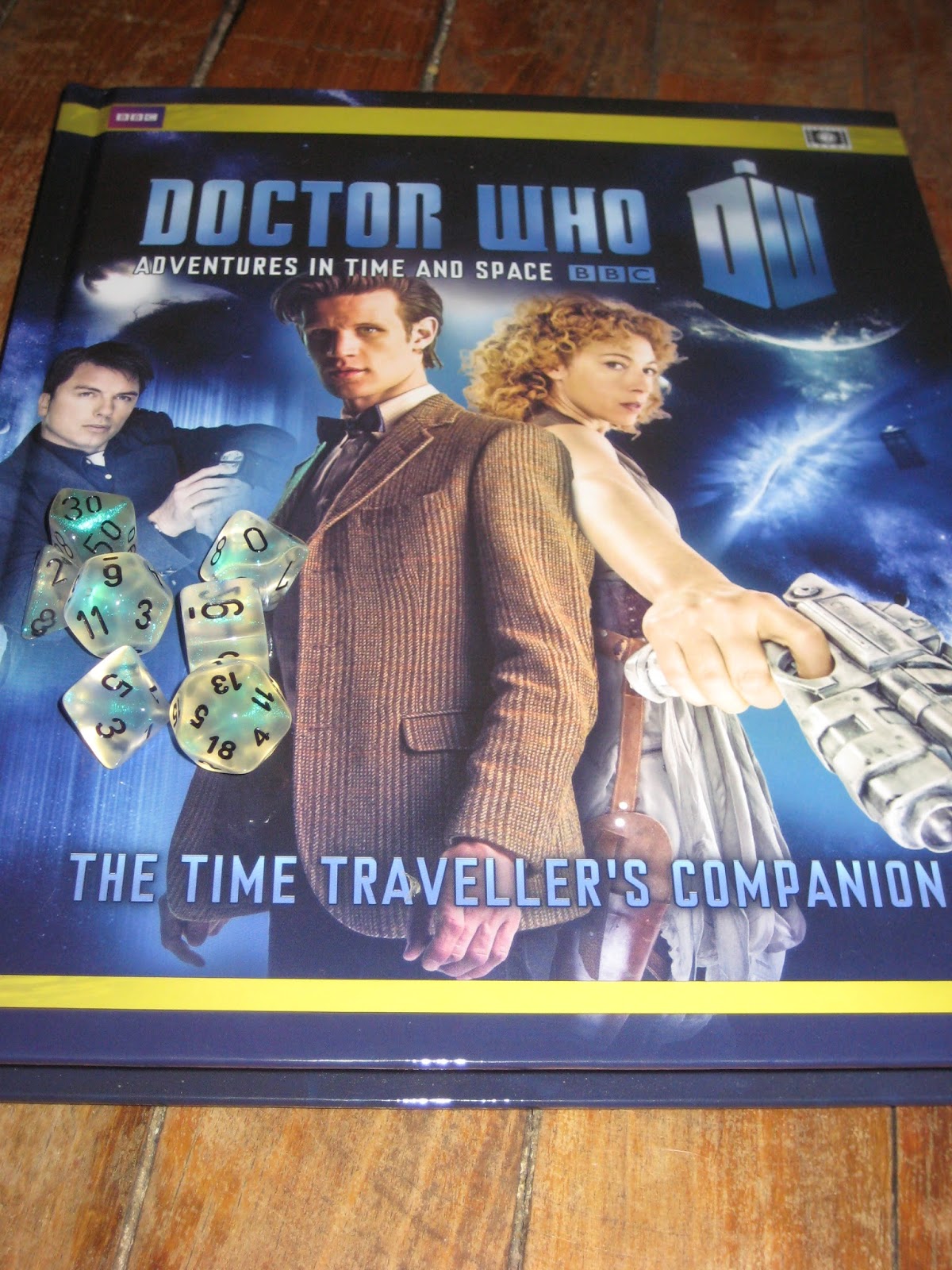 And back across the white sands of Ohio we went. The sun was out by then, so it was a pleasant enough day. Paul has blogged about the convention and Tom is doing his infuriating multiple post thing, so I'll just point you to the first one. As usual, don't believe his lies. Jerry seems to have forsaken all forms of social media except Trollhalla, so I'm not sure we're going to hear from him. 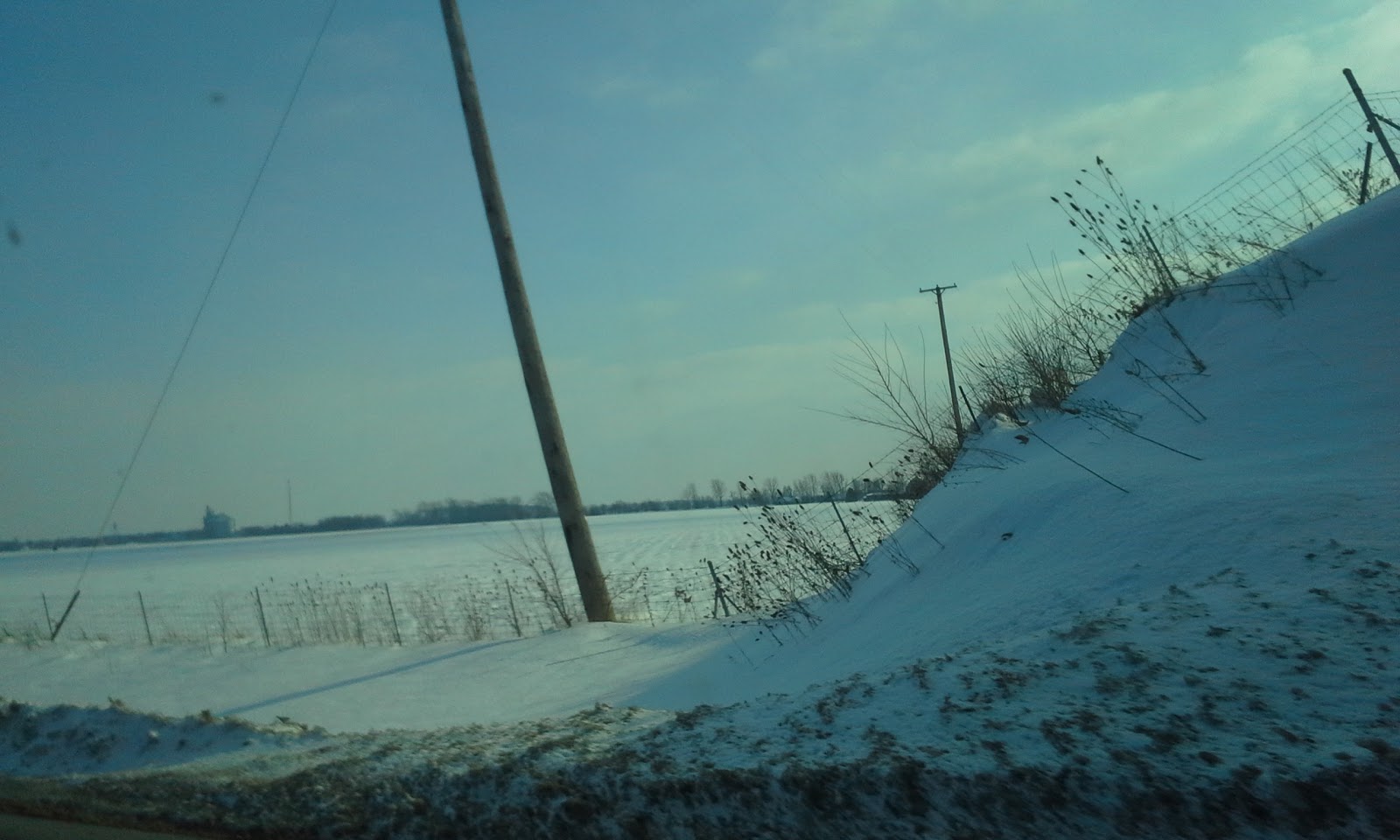 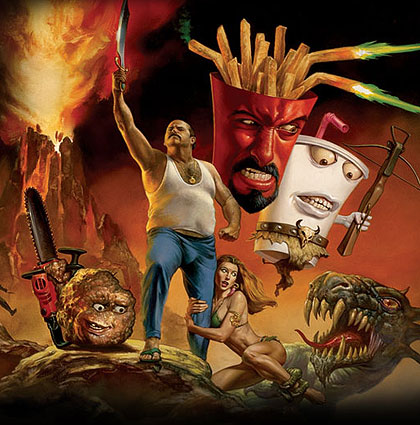