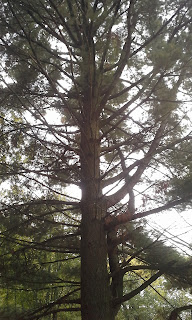 I stumbled across this place while I was walking to pick up the car yesterday. There's a fairly major intersection, with one distinctly smaller and homier road that goes off to the west. Right past another ordinary crossroads, the neighborhood street dead-ends at the entrance to this cemetery. I had been close enough to it before to know it was there, but I figured, despite the enticing entrance, it was still just gonna be a cemetery.

Yesterday was a nice day, though, and I had plenty of time to get where I was going. I walked through the gate and was immediately flanked by pine trees. They were all pretty old, and one of them was really striking, towering over all the other trees. Ordinary pine trees might not be as seductive for other people as they are for me. I grew up around them, playing in forests carpeted with brown needles and pine cones instead of crumpled up leaves. In my twenties, I moved off to other places with mostly hardwoods so, to me, pine trees are youth and wide-eyed exploration. Pine trees are magic.

Beyond that, there was an odd assortment of other trees and, of course, graves. I didn't spend a lot of time looking at headstones. The names wouldn't mean much to me, and, while I wasn't in a hurry, I did eventually have someplace to be. It wasn't really the history that drew me in, anyway.

It was a little bit cloudy, and, while the cemetery itself doesn't have a thick canopy, the occasional shaded nook offered patches of luxurious twilight. The busy street was not even a quarter mile away and there were houses even closer, but somehow I felt the kind of wide-open emotional freedom I usually only feel alone, at two or three in the morning. 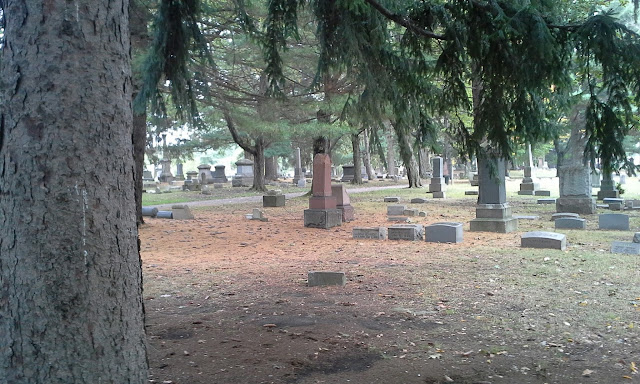 Am I being morbid here, going on about a cemetery? I don't think so. My mind certainly wasn't on death, or even much on dead people, beyond occasionally wondering about the story behind an interesting stone. At the back, my path turned into a small loop around a big one with several smaller stones around it. It looks like just a monument or something to identify the area but, as far as I can tell, these are actual graves. 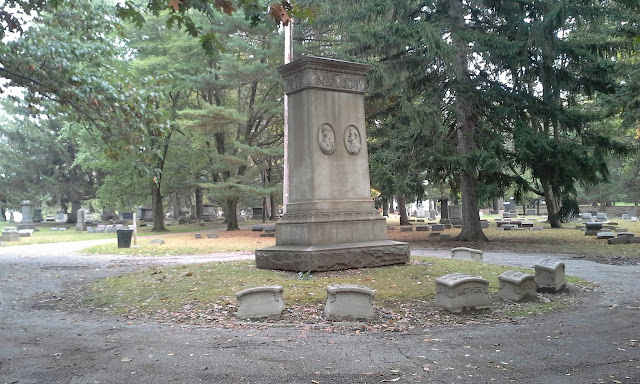 Past that, the property ended at a metal fence and a sharp dropoff into a narrow valley. This isn't a great picture, but shooting between links in the fence didn't give me a lot of options, and I didn't like any of the shots that included the fence. I really wanted to climb over and take off into that valley. It felt like somebody glued a piece of home onto the back of this otherwise flat neighborhood. It was the exclamation point at the end of all the little things that made this enclave feel so disjointed. 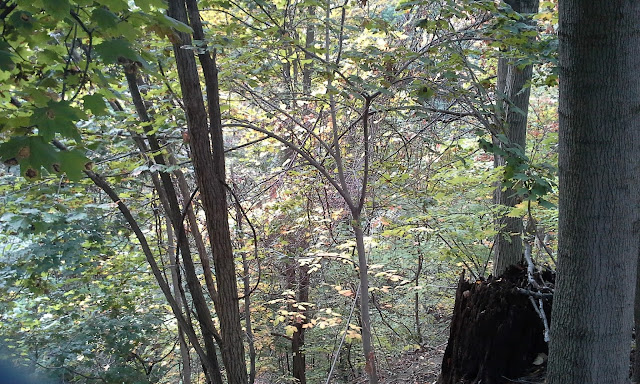 Of course, for all I knew, somebody nearby owned that valley and would blow my head off with a shotgun for trespassing. Plus, I did have an errand to complete, so I went back the way I came. I half expected the gate to transport me to a foreign country, or a century in the future or something, but nope, it was the same old afternoon in the same old town.

I've got so many regular games going (and I'm running two of them) that it was dominating my weekends, so I'm taking a break for the rest of October. Partly this is so I can get my events for Carnage ready, but that won't take all that much time. I think the other part is that I just need to clear my head a little bit so I can write more.
at 2:57 PM 5 comments: