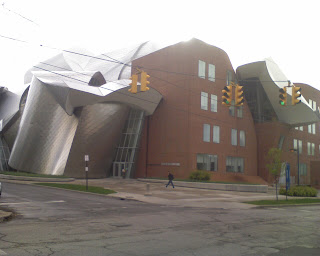 I Can Haz Grant Plz? 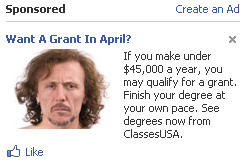 Yeah, I want a grant, but I'm sure as hell not going there to get it.  Can't you just picture this guy skulking around the back of a convenience store going, "want some grants, little girl?"  Is he even wearing a shirt?  What demographic do you suppose they were targeting when they decided that the ideal companion for their advertisement was this mugshot?
.
at 11:41 AM No comments:

Nice Place for a Back Door 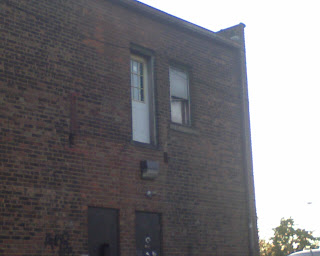 What is it about decimal numbers that's so hard for these freakin' engineers to understand?
.
at 9:17 AM No comments:

Email ThisBlogThis!Share to TwitterShare to FacebookShare to Pinterest
Labels: dayjob

The Storm Comes to Ohio City 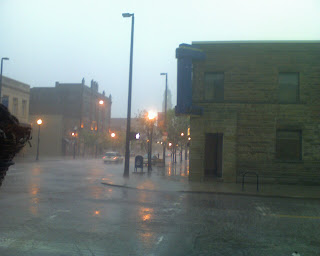 Known Round Here As Strider

In the Pathfinder RPG (which I guess could be worse, despite the ginormous rule book and the fact that they stole the name of one of my characters), the picture they give for the ranger is a dwarf.  I'm actually a fan of the removal of racial limits that D&D and its descendants moved to in 3E/d20, but I just can't get around the comedy of this notion.  Nobody's going to give that ranger the nickname, "Strider."  Waddler, maybe.
.
at 12:05 PM No comments:

So here's the way my events for Gen Con look.  If you want in on the Caves of Chaos adventure, best do it soon. ATHF still has several slots if you're willing to get up a little earlier and a couple if you want to stick around in the evening. I wonder if I should have included the word "sandbox" in the description of the Lightfoot Island thing, since it seems to be one of those words the game-bloggers are frothing over lately, and it fits the kind of "roam about and see what happens" set-up I have in mind. At the time I registered the event, though, I didn't really know what I was going to do for that one.


And here's the rest of the Peryton Gamers lineup... I think.  Not in order, because it was kind of a pain re-sorting mine and I didn't want to do it again.  Deal with it.  You'll notice that every single Call of Cthulhu event is sold out.  I believe you can still petition Tom with gifts or flattery if you want to try and squeak in. And of course you can always bring generic tickets and hope for a no-show.

Want to know what Oompa-Loompa's really are?  Watch Seven.  That's exactly what would happen if an Oompa-Loompa escaped into the outside world and was somehow able to disguise itself as a human.

Stare at the Wall!

I've posted this a few other places over the years, but I figured since it's April Fool's Day and I've read a few too many "Old School" screeds* lately, it might be fun to do it again here with a few updates. So...

Tired of cumbersome rules and oppressive storytelling getting in the way of your role-playing? Disgusted with game designers making you write down your character's special abilities? Are you ready to set your imagination free?

Then maybe you're ready for Stare at the Wall!

To play Stare at the Wall, you need only a wall, our game books, a lot of dice, and your imagination! There are no rules to constrain your fantasy, no story to distract you from the sound of dice rolling, and no GM to bother you about "game balance." You don't even have to include other players, unless you want to use the award-winning Stare at Your Opponent one-on-one combat rules. Just listen to what people are saying!

"Ever since I started gaming, I've been searching for the perfect, most rules-lite way to play, and now I've found it! I'll never struggle through the intricacies of a rule-based game again! Thanks!"
-- Norm Bendler, Joplin, Missouri

"My friends and I love how easy it is to run Stare at the Wall without preparation. Sometimes we start a pick-up game without even meaning to. This game rocks!"
-- Jeb Redding, Buffalo, New York

"I've always been frustrated with the way other games try to impose their politically correct dogma through the rules, spoiling the historical flavor by encouraging women to take part in adventures and speak without permission. With Stare at the Wall, my imagination can carry me away to a world where I'm beaten and raped every day, just like a real slave girl!"
-- Ted Pickford, Red Bluff, Alabama

*Not that I'm categorically opposed to "Old School."  Some good stuff has come of it.
at 10:51 AM No comments: