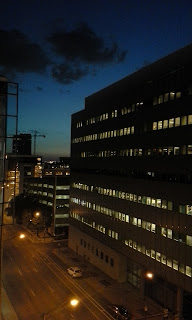 Back from Origins, although it was kind of drive-by conventioneering for me, this time. I didn't do much.

Even after cancelling Gen Con, I was a little short on vacation time this year, so I had to wait until Friday to head down to Origins. I had planned to run several events, and then cancelled them all. I heard later that people were still able to sign up for them, so my apologies to anyone who was disappointed.

There are a couple of things I've never liked about running convention games. The first is pre-gens. One of the games I was running was a Cypher System one, and, despite a number of ways in which this game is fantastically easy to prep, making characters for people to play is fidgety and time-consuming.

The other thing I don't like is teaching people how to play the game. Nobody ever knows how to play the damn game. Sure, most real gamers know how d20 variants work, but anything else is a struggle. The last time I ran Cypher, the general alien-ness of the expendable attribute pools took what seemed like an eternity to get through, and of course I had to explain every single cypher to them. The game itself was a lot of fun, once everybody (sort of) knew how to play but, when you're GM'ing at conventions, that despicable boulder rolls back to the bottom of the hill with every new session.

So yeah, this time I just couldn't stand the thought of it. I don't know where that leaves me for the future. I've been in kind of a mood lately, so maybe it'll pass and none of this will be a thing. It was a nice trip anyway. I think Origins will make an acceptable replacement for the morbidly obese Gen Con, if I end up needing a replacement.

Oh, and I bought some stuff and got a few other things in trade. Here's the loot I came home with: 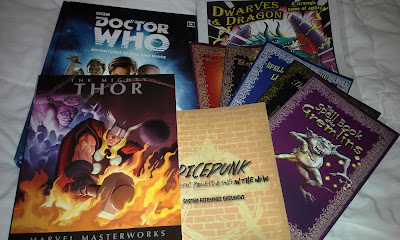