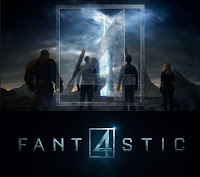 I'm a long-time fan of the Fantastic Four. It was one of the first comic book series I collected and I still re-read the old issues. Despite the inevitable doubts, I'm excited about the new Fantastic Four movie. I can't help it. I had reservations at first about Sue and Johnny not being biological siblings, but I found that fairly easy to get over. As long as they act like brother and sister, I'll be fine with it.

I also like the other two movies, though, and I'm a little bit sad that they didn't just continue that line.

I know, I know. These movies are far from perfect. Their Doctor Doom was just not Doctor Doom. In both movies, Sue had to get naked in public for no particular reason. The scene where Sue's response to Ben's angst was to whine about Reed not paying attention to her makes me cringe every time. And back to Doom: besides not being properly Doomish, he has awful, awful, awful fight banter.

But the biggest of those is easy to dismiss. Doom isn't Doom, but he's a great villain in his own right (except for the banter, but that's only a few seconds of pain). Seriously, try watching it without comparing him to the comic book character, and then tell me what's wrong with him. And the thing is, we don't even need Doctor Doom. Sure, he's a great villain, but he doesn't define the Fantastic Four. He never did.

For me, Fantastic Four is about two things: (1) these characters and their relationships, especially with each other, and (2) facing the Unknown. Just look at the first issue. First off, see who's not on the cover? Right. Doctor Doom. After a little bit of bickering, they bravely and illegally hurl themselves into the  void. Then they go into a kaleidoscopic underworld and face not only strange monsters, but the Mole Man. Like the FF, the Mole Man is a human transformed by his exploration of the Outside. When they do meet Doctor Doom in #5, it's as a set-up for a time travel adventure.

Doom is still an important recurring villain, one most FF fans look forward to seeing. I wouldn't deny that at all. I just want to make the case that what really defines the Fantastic Four is not the villains they fight; it's the new worlds they explore. And the family thing too, but I don't think I need to argue that point with anyone who's ever even flipped through an issue. 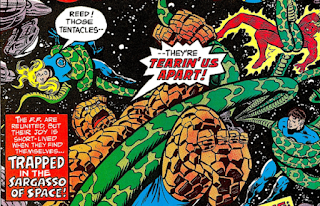 The two movies from a few years back have what I'm looking for in a Fantastic Four movie. They've got mad science, the Unknown, and four people with super-powers held together not only by that fact, but also by a disarmingly normal kind of family bond.

I've heard people fuss about the cast. Unless they're only talking about Doom, I don't get that at all. The actors playing the Fantastic Four in these movies all handle their roles beautifully. I don't even know how to argue the point, because the opposite position makes no sense to me.

So anyway, yeah, I'm looking forward to finding out what they've done with the my old friends in this one. I can tell from the previews that they know it's got to have the Unknown, and I think I see the kind interpersonal dynamics I want, as well. It looks like it might also have another strange way of pointlessly cramming Doctor Doom into the story, but I'm still going in with an open mind and a lot of hope.
at 7:56 PM