"I can't hold my breath anymore. I stopped swimming and learned to surf."
-- Superchunk

I'm down to that last-minute crunch on Qalidar. I should already be into layouts, but there are a few more changes that I've just got to get in. The funny thing, though, is that I'm still having fun.

Before I even got to this point with Peryton RPG, I wanted it to be over. I had already worked out all the interesting additions -the fun part- and I was left with the task of slogging through all the old familiar rules and adding all the magic missiles and orcs and flaming swords that I wanted to borrow from the Open Gaming Licence. I'm proud of what I did with that game but it is, after all, still just a stripped-down Dungeons & Dragons variant with some sprinkles I cooked up to give it its own color. 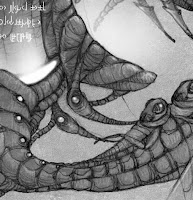 Qalidar is something else. It's mine. Sure, it's still based on the d20 core mechanic. It still has classes and levels and hit points. Unlike Peryton RPG, though, it's not trying to hold onto the flavor of something else. It's not a fix or a substitute. Qalidar has been creeping into my game sessions and my writing for the past twenty years. It finally poked its head into the outside world in 2008, but even that was just a start, one that I again pushed aside to work on other projects, other stuff that seemed more important or more practical because... I don't even remember.

But Qalidar was never an act of will; it was always just there. And that, I think, is why it feels so good to be giving it its own rules and an expanded treatment now. Don't get me wrong - it's not like I'm just scribbling down a stream of consciousness, but the creative part does feel more natural than usual, and the mechanical part comes together around it without much of a fuss. From the start, when my players and I stumbled across it in that D&D game back in the 80's, Qalidar always felt more like something I was exploring than something I was building.

Which I guess brings me back to the whole surf metaphor, although I actually don't know anything about surfing. Getting thrown about at random is not acceptable. I can manage swimming against the waves, but it's exhausting. I'd like to try taking a ride.