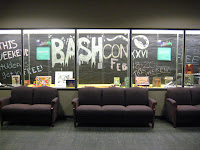 ...also called BASHCon XXVI.  Lately I've been waffling on how to identify these things.  Anyway, it's BASHCon, one of my two favorite small cons (the other being Carnage).  Of course, as I've said before, nothing compares to Gen Con, but that's a whole other category.

BASHCon is hosted by the University of Toledo's BASH club at their student center.  While there are drawbacks to not having the con inside or adjoining the hotel, the campus is a pleasant and somewhat nostalgic environment.  The university I went to back in the 90's had a pretty sorry excuse for a student center (a pool table, some vending machines, and one medium-sized empty room), so I'm always appreciative of schools with a nice one. 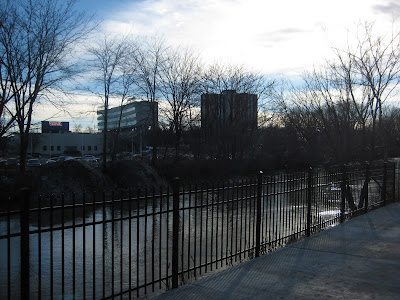 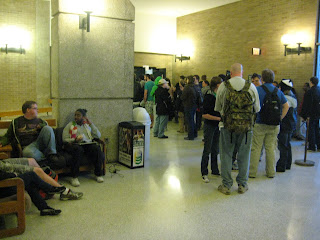 We arrived in Toledo mid-afternoon on Friday, checked in to the hotel, and drove over to UT to slog our way through the registration lines.  I got done first and wandered into the exhibit hall while Tom tried to figure out whether or not he had pre-registered. I wasn't planning to buy anything right away, but I was ambushed by a new supplement for the Doctor Who RPG, at a discounted price, even, and couldn't resist. I mean... Doctor Who, right?

I was signed up for Tom's Tunnels & Trolls game instead of running one myself Friday night.  Whatever you think of Tunnels & Trolls (I like it, but I know lots of people don't), Tom's T&T sessions are the kind of adventure no gamer should miss.  Jerry and (wow, I just noticed that: Tom & Jerry) another guy joined us and our crew of wizard, dwarf, and troll shaman took off through the Desert of Sulta with our less than modest goblin guide to find a lost pyramid.

The game came to a sudden stop when, at 11pm, the lights went out. Tom was convinced that the janitor just wanted to go home early. Maybe he's right. I dunno. Anyway, we all agreed to get back together tomorrow and finish the game, packed up our stuff as best we could by the light of our cell phones, and left. 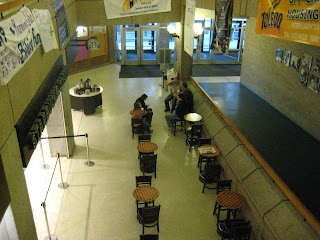 We were back Saturday morning for my "Fiend Folio Frenzy" (Peryton RPG) and Tom's Glow (post-apocalyptic TAG variant).  Not many people made it in that early, so when nobody showed for Tom's game, he jumped in on mine. Given the late start, there wasn't much chance of finishing the scenario, so I just let go of the steering wheel and watched the templar, orc fighter, and halfling berserker/wizard go wild and explore whatever nooks and crannies caught their eyes. I had a great time and I think it went well in general. Also, I noticed several small things I could change so that it'll run more smoothly in the direction it was meant to go when I do this at Gen Con.

We popped over to Phoenicia, a middle-eastern restaurant in the student center, for lunch and then found a table to finish our Tunnels & Trolls game from the night before. Everybody showed up on time and our characters successfully completed their mission. I had signed up for a different game (a rather interesting-sounding Aztec mystery), but Tom's Call of Cthulhu session was sounding better and better, so I canceled. After a short nap, we packed up again and returned for the evening session.

"The Horrible Fate of the Haunted House Hunters" kicked off at 6pm with a full table (not a surprise with Call of Cthulhu). Our characters were those ghost hunters who have a pro wrestler go around provoking the ghosts. You can imagine how that went. Jerry played the wrestler and was hilarious, especially when, as things got weirder, his character slipped into his "real voice," with a whiny east coast accent instead of his usual wrestler-growl. My character went insane, but not as insane as the research consultant, who eventually lit himself and our van on fire and crashed it into the haunted house. Top it off with tasty treats from Del Taco and you've got a heck of an evening. 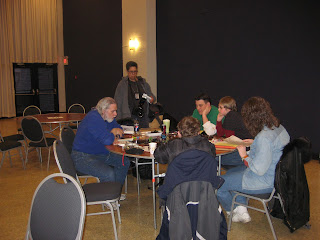 Sunday morning, Tom & I found only empty tables for our events, so we jumped in on Jerry's 2nd Edition AD&D game instead. Tom grumbled occasionally about the evils of AD&D, but I was happy to play a bit more of the game that shaped most of my role-playing history. It was a fun scenario about some frog demons (slaad) kidnapping an entire village (incidentally spoiling the wedding plans of one character's daughter) and implanting their eggs in them. I thought it was cool that, in addition to us old timers, there were two kids in the group who were eager, attentive participants. A reporter for the local paper came by, took a few pictures, and asked Jerry some questions.

And that's pretty much it. Oh yeah, it got cold again. 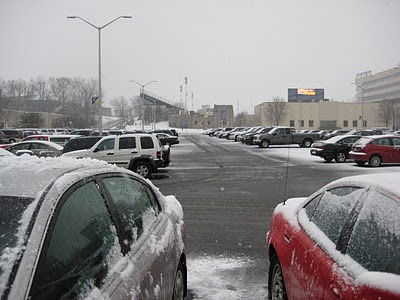