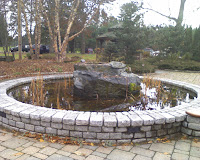 Sick as I was for the first part of last week, I never stopped looking forward to Carnage. Last year's hastily thrown-together expedition and the drive home had been one of my favorite trips in a long time. This year I was taking extra time off to make a good long weekend of it.

Wednesday
We took off after work with the intention of driving as far as we felt like, stopping for the night, and going on in the morning.  Somewhere along the way, I realized that I had once again forgotten my good camera and would have to rely on my serviceable but flash-less phone for all our pictures.  Mavis, our trusty GPS gizmo (so named because the voice somehow sounds like a "Mavis" to me), guided us right to a cozy, relatively cheap motel in Syracuse (which, in the native tongue of the Onondaga Injuns, means "place of stopping for the night" and, despite what some pernicious liars would tell you, has nothing to do with any place in Sicily). 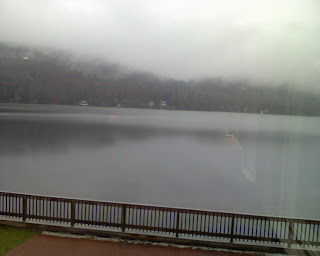 Thursday
Mavis took us over hill and dale (mountain and gorge, more like) to the shores of Lake Morey, where I was practically jumping up and down with excitement over the pre-con game we were about to play.  Before that, though, we said hi to some friends from last year and met a few new ones.  Tom, Christy, and I went out to an excellent Greek pizza place called Leda's with Tyler Dion, another of the Carnage organizers.  I had somehow pictured Tyler as being angry and intimidating (maybe because his name sounds like Tyler Durden, or because he runs GURPS) but he was actually quite agreeable.  He had a scarf like Tom Baker's in Doctor Who and he didn't burn my hand with lye even once.

Done with dinner, it was time to get back to the resort for The Andre Experience.  Andre runs his games in a dark, closed-off room which he decorates with props appropriate to the scenario and tricks out with a professional lighting and sound system.  Combined with his intense storytelling style, some great players, and creepy scenarios (okay, I can really only speak for "Incident at Owl Lake"), this gives you the kind of powerfully immersive gaming experience that might just make Tom Hanks think he can fly.  It totally lived up to my expectations. 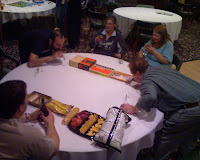 I slept in on Friday, partly to make sure I was over my cold and partly because I expected it to be my only chance to do so.  Once I got out in the halls, I wandered around, picked up my con badge, checked out the somewhat spare but interesting exhibit hall, and finally found Tom hanging out with some friends because nobody showed for his game.  Throw in a few more impromptu gatherings, a Spacers game, and a few trips to the conveniently-located lobby bar for bourbon & Coke, and you've pretty much got the flavor of Friday.  I did some final prep work for my game ("Beyond the Caves of Chaos") the next day and went to bed early.

Saturday
I had to be up early because I signed up for the eight o'clock session.  I don't know why I did that, but I did.  Anyway, I had a nice little trip to the Keep on the Borderlands set up using the Doctor Who RPG rules.  Player characters included a psychic agent, a wizard, a thief, an ill-tempered robot, and a flamethrower-wielding ewok based on my sister-in-law's character from our Star Wars campaign.  Tom played too.  I was pleased to see that the magic rules I grafted onto the game worked well, and everyone seemed to enjoy slipping between fragmented realities, evading pyramid-heads and robo-apes in addition to the usual Gygaxian fauna. 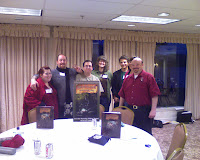 After lunch I got drafted into a game of Witch Hunter, in which I took the role of Sister Agnes of the Ashen Cross, a perpetually depressed nun with magic prayer powers.  We rampaged through the seventeenth century world of the Dark Providence campaign digging up graves (although Sister Agnes opted to wander off and pretend that she didn't know this was happening), tying up rogue priests, delivering stern lectures, and picking up owl-demons & bonking them on the head.  Neat game and a fun bunch of players.  The "sin points" mechanic that makes misbehaving both a temptation and, ultimately, a bad idea, was cool.

After a quick dinner downstairs catching up with friends, I found out that the event I had signed up to attend early Sunday morning was also being offered as a midnight game.  This sounded great to me, so I wandered about in search of registration options and, failing that, the guy running the event.  Finding neither, but having been advised that it would probably be fine to just show up, I wandered off and took a nap while Tom ran his massive Call of Cthulhu event. 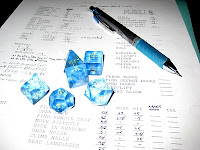 Showing up worked just fine.  "One More from the Vault" was listed as a nostalgic trip through a yet-undetermined 1st Edition AD&D adventure.  The group gathered somewhat slowly while Tom's Call of Cthulhu game was still in full swing across the room.  We ended up settling on Tegel Manor, a trip through a suspiciously dungeon-like haunted mansion.  I got out my very first set of polyhedral dice (not counting the crappy ones that came in the Basic & Expert D&D boxes) for the occasion, and they served me well.  We played until four o'clock in the morning and nobody really wanted to stop, but we had slain some monsters, rescued some captives, and come to a good stopping place, and several of us had to travel the next day.

It was, as promised, a really fun old school romp and the nostalgia is still clinging to me.  It was also the only time this weekend that I stayed out later than Tom.  And, really, the game as we played it may be superceded, but it still works admirably well for its intended purpose.  I think I'll hold babbling about the relative advantages of different D&D editions for another time, though... if ever. If you're interested in that topic, you can find enough to make you wish you'd never asked, just by browsing the Internet.

Sunday
I didn't have to get up early after all, but I didn't feel any great compulsion to sleep in, so I was up and about fairly promptly and packing up while Tom was... I'm not sure what Tom was doing.  Anyway, we caught up to each other at one of the gaming tables surrounded by friends and then wandered off to the exhibit hall, where Tom bought some C.J. Henderson books and then was cleverly maneuvered into buying a Dark Magic and Donuts print.  I didn't leave with any new goodies this year, but I had daydreams of running some kind of Ravenloft II based event (which I'm fairly certain will never happen) to entertain me.

And then there's the trip home, which is going to be worth a whole blog in itself. 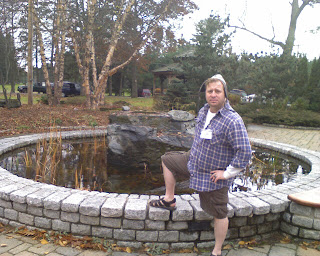