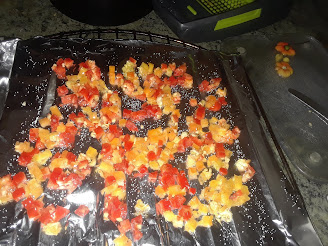 Update 11/16/2020: My opinions on the various pepper flake blends have changed some, but I'm not gonna go back over all of them except to say that Asian Reds is now my all-purpose go-to and Sweet Heat is really good when you grind it up.
I love hot peppers. To the right, there's a picture of some habanero bits that I dried in a toaster oven with sugar and salt. Habanero is about the limit of my heat tolerance. Despite their deliciousness, I usually only eat habanero peppers straight up when I want to shock myself out of a funk.
Okay, here's where I start sounding like a shill because mostly I'm blathering on about some stuff I bought from this one place, Flatiron Pepper Company.
There were several that looked good, so I ordered a bunch: Four Pepper Blend, Sweet Heat, Hatch Valley Green, Asian Reds, and Smoke Show. The Four Pepper Blend (Arbol, Ghost, Habanero, Jalapeno) is probably the one I'd buy if I had to pick one. It's got a nice heat level and plenty of flavor. I could see using this in place of any of the others. That's not to say they're all the same, just that this one would do even when one of the others would be a better fit. 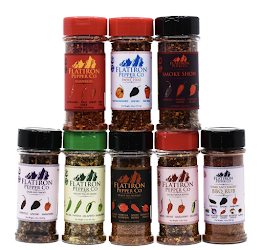 I was really pleased with Smoke Show (Chipotle, Smoked Ghost, Carolina Reaper) as well. As the name suggests, it's made with smoked peppers and the flavor definitely comes through. It's also the hottest of the ones I got. I think it's the hottest one they have except for "I Can't Feel My Face."
Yes, there's one called I Can't Feel My Face (Carolina Reaper, Ghost, Scorpion, Habanero). I keep looking at it and thinking I should order this and try it but, remember what I said about habaneros? That's the mildest pepper in this mix. The Scoville ranking is over 750k. I'm willing to admit that I have limits.
I was a little disappointed with Sweet Heat (Scotch Bonnet, Ancho, Red Bell). I mean, I knew it would be mild, but it's really too mild. The heat gets completely lost in anything I add it to. That might be okay, but the flavor does too. It has a nice flavor. Sweet, in case you hadn't guessed. It tastes good when I just chew it up by itself. Gnawing on a spoonful of pepper flakes isn't really what I'm looking for in a dining experience, though. Maybe someone with a more, whatchacallit, discerning palette would be better able to appreciate this.
Likewise Hatch Valley Green (Big Jim, Sandia, Jalapeno, Habanero), although in some ways I have the reverse complaint. It's got about the heat level I expected for Sweet Heat, but I'm not wowed by the flavor. I dunno. I'm still experimenting with all of these, so maybe I'll find some other uses that make it shine. Right now I'm mostly mixing it with one of the others, which is also what I'm doing with Sweet Heat.
I use Asian Reds (Gochugaru, Thai Chile, Ghost, Tien Tsin) for pretty much the stuff I imagined I'd use Sweet Heat for. It's not as sweet, but it goes with the same kind of things and has a respectable burn. I even put it on otherwise plain buttered toast for breakfast. Or, you know, whenever. And of course I put it on Chinese food. Restaurants around here have to worry about pasty mid-westerners (as opposed to pasty southerners like me) going all Karen because their Kung Pao has more bite than a poblano, so they tend to go extremely light on the spices. This stuff is the cure.
I guess that wasn't too shill-ish. I did have a few criticisms, after all. BUT WAIT! THERE'S MORE! I've got this coupon link they gave me. You can use it to get $5 off an order, and then I get a coupon if you use it.
at 2:57 PM

Email ThisBlogThis!Share to TwitterShare to FacebookShare to Pinterest
Labels: Food