I was poking at a friend for pairing Susan Storm with Namor, because Namor is a dick. Plus, Reed is awesome. How often do you get a mad scientist of his caliber as a hero? During the conversation, he told me I should read What If #21, What If Invisible Girl Married the Sub-Mariner. I'm a fan of 70s & 80s comics anyway, so I figured I'd give it a shot.

At first, I didn't like it, because the portrayal of Reed was so negative, and I like Reed. In retrospect, it wouldn't be the only time he's been in a mood like this, but I guess what bugged me was seeing it contrasted with Namor, who is always like that, and was being portrayed as the adult in the room.

As I continued to read, though, I noticed something that the author was doing, and I'm pretty sure it was intentional. Reed is so bitchy, here. He yells at people for nothing, he throws tantrums, and he sulks. Johnny follows his lead. Ben is the only one with any sense. 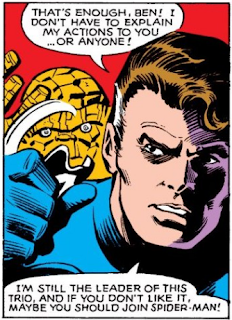 Namor, on the other hand, while portrayed as mostly respectful and attentive to Sue, is all smug and nest-buildy, but simultaneously super-insecure, pouting over the least hint that she might care about anyone other than him in any way. 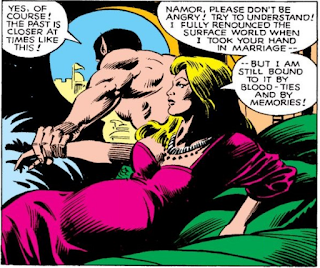 Reed even goes so far as doctoring video footage to try and start a war with Atlantis, because obviously that's a great plan which could never backfire. Namor is mostly cool about stuff, but you have to remember, that's because he got what he wanted. Namor's type are often magnanimous when they feel like they're on top.

And the way they're acting feels really familiar, doesn't it? Who else acts like that? Oh yeah, women! Well, women in stories written by men, anyway. Especially the older ones. Keep this in mind as Reed totally goes off his rocker. His plan to engineer a war foiled by Ben, he concocts an even more insane plan to turn all the people of Atlantis into air-breathers, while they're still underwater, in order to deprive Namor of his kingdom. Hell hath no fury, amirite?

Johnny seems to think they'll have time to make it to land, but I don't think Reed cares, because he's crazy jealous. You might even say he's hysterical. Of course, he snaps out of it. I guess, even in What If, an iconic hero like Reed being a mass murderer is a little too dark. Still, it takes some special persuasion from Sue, who, despite being in a lot of pain, manages to smack some sense into him. 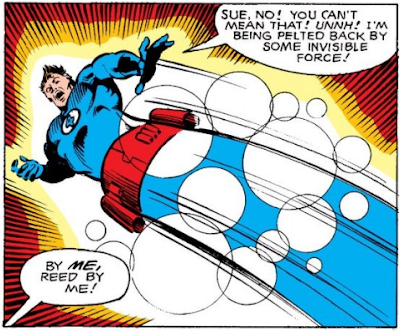 So Reed switches off his gadget and (despite the death of at least one Atlantean soldier) everybody looks at the baby and starts making nice. Well, except for Johnny; he's still pissed off. In the end, even the Watcher is like, "I dunno. Reed might pull this shit again. Laterz!"

And yeah, knowing Bill Mantlo, I really do think this role reversal thing was a deliberate move, engineered to make a point. And it totally kicks ass.