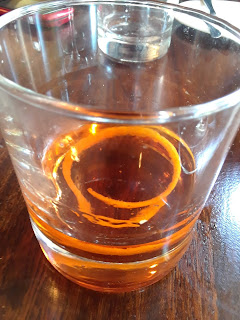 The main thing about Gen Con this year is that I took it easy. I only ran two games. Both of them were in the afternoon so I could sleep in every day. I didn't try to promote anything or even hand out business cards. I just gamed, shopped, and hung out with people I like hanging out with. I didn't find all of them, but it's always like that. I even managed to keep up my meditation schedule.

Here's what I ran:

Archer: Phrasing (Thursday)
Vortex System
Nobody's sure what year it is, but the Cold War is still a thing and Mallory Archer is in charge of a spy agency.

Just Another Layover (Friday)
Star Frontiers
Diverting to a newly-charted system to answer a distress call, you find an outpost crew claiming it was a computer error, saying everything is fine. Of course, everything is not fine.

I was signed up for an interesting-looking seminar by Shanna Germain about staying creative in stressful times but the "Will Call" booth was unapproachable through most of the convention, so I never picked up my ticket. I've never been more glad that our GM badges come from a different booth. See that line, going off around the corner into the trees? That's nowhere near the beginning. It also runs all the way to the booths close to the main entrance. 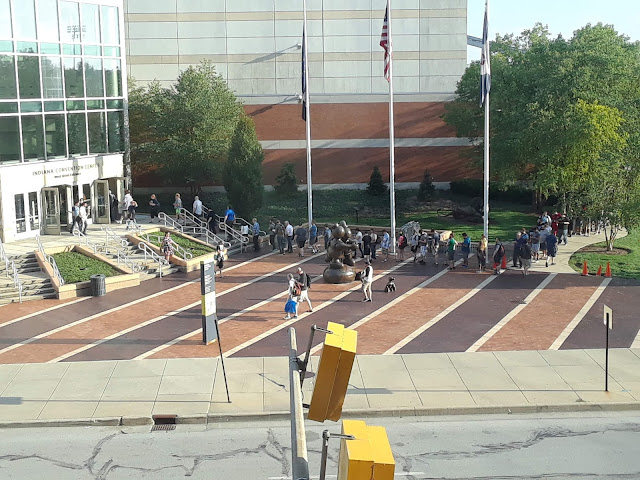 So anyway, Tom and I slogged through the Indianapolis rush hour on Wednesday and arrived at the Marriott a little after 5:30. Check-in was quick, but it took a while to get rid of the car. They had a newly remodeled lobby. I was disappointed at first, because I always loved the old one, but this one was really nice and a lot of fun to hang out in, so it grew on me fast.

Curtis was already there, so he, Tom, and I had a drink at one of the two lobby bars. Someone gave me a sparkly d20 pin. Then we headed over to High Velocity in the JW for Old Home Night. We had a long table there. I think it's the only time I saw Jerry but we did get to chat some about D&D so okay. After dinner a lot of us went to the upstairs lobby and made a nest there. The idea was to discuss plans for Brett's giant superhero LARP, but several of us were just there to socialize. 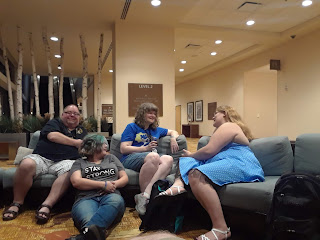 I think they got stuff worked out. I don't know. We were out pretty late. I had a good time anyway.

Thursday I was hung over, but I still made it to my Archer game. Six of the eight people who signed up were there, so Curtis jumped in to play Lana. It went well, which means there were traffic-related deaths, plane crashes, mad scientists (more than one!), infighting, and alcohol.

I still wasn't feeling well, so after a brief visit to the exhibit hall, I went back to the room to chill. 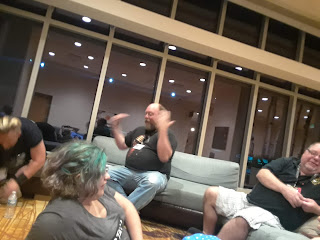 Later on I met Tom and Caed at The Ram, and then Curtis, Dylan, and Jordan showed up too. I walked with Caed & Curt to get ice cream at Steak & Shake, but didn't have any myself.

Yeah, that's pretty much it for Thursday.

Friday, like every other day on the trip, started with me lounging around the hotel. Eventually I wandered off to run Star Frontiers. I had a good group, including at least one who was trying it out for the first time. One guy did show up an hour late because he was still on Central time, but it wasn't hard to work him in. They did well with the mystery and the alien communication stuff.

After the game, I stuck around the table for a while listening to Tom and Curtis run their games. He was doing a Crawlspace World War I horror thing, and Curtis was doing an Icons game about sharks. There was a third game going on, but I never really figured out what the deal was. In my head, I started labeling it, "Garden Party, the RPG" because it seemed like all they were doing was role-playing ordinary people hanging around a suburban neighborhood. The GM had a great voice, though and, whatever the game was, the players were way into it.

I wandered off for some more shopping, then hiked out to meet Tom, Caed, and Dylan at Scotty's. It was a good time, but the waitress was busy or something. They were giving away free dice, though, bringing my freebie total to three. Gotta love the free dice. 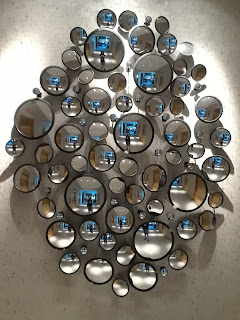 Later on, we hooked up with Bill and Darrenn at the one of the Marriott bars (Conner's) and closed it down, even going back to the room for a while. I don't remember that night very well, except that it involved a lot of whiskey sours and then just whiskey. It's not easy keeping up with Bill.

I was hung over again on Saturday, but it didn't last as long as the one from Wednesday night. Tom came by and we grabbed some bratwursts at one of those lobby concession things. I was done with all my obligations, so I just wandered around after that.

Eventually, Tom texted me about meeting for dinner at the Omni, so he could go from there to Rise of the Overlord, Brett's superhero LARP. He also wanted me to bring him some game stuff that he had left in the room. That restaurant was super-expensive, so I just had a salad, but I was introduced to a piece of alcoholic poetry called the Sazerac. It had whiskey, bitters, and absinthe and it was awesome. John showed up too and we opened the little bottle of wine Tom had bought to share.

While Tom started constructing his cardboard villain costume for the LARP, Curtis got in touch with me and I talked him into coming over to watch the game, despite the fact that he was actually hoping to go eat. 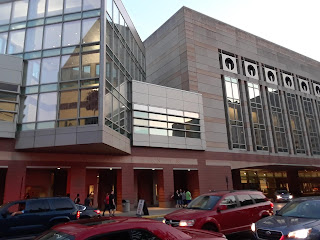 Brett neatly divided up the room, set out some props, and got started. It wasn't as much fun to watch as I had hoped. I mean, the players seemed to be enjoying it, but nobody came in costume and it was impossible to follow all the different groups doing their stuff.

Curtis and I decided to go eat and maybe come back later. We stopped at the Old Spaghetti Warehouse, but there was a long wait and people were just packed in all around. Waffling on where else to go, we eventually found our way to Rock Bottom.

Curtis went back to the room to pack. I was going to go back to the LARP after dinner, but I had the beginnings of a blister on my foot and decided to just stay in. I had new stuff to read, anyway. Around four in the morning, Curtis woke up to catch his flight home. Tom and I wished him a groggy farewell and went back to sleep. 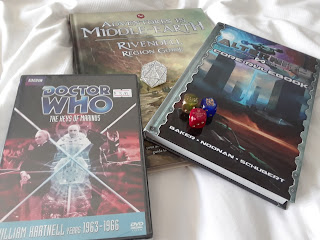 Tom had a game Sunday, so I wandered around some more. I thought I had done all the purchasing I was going to do, but then I found those Dice Saber things on sale. They had green, red, and blue, so I grabbed a blue one. I brought it over to Tom's game to show him, then went back to the room.

Later, after a brief return to the exhibit hall because Tom wanted to pick some stuff up for a Cleveland friend, we met up with Jordan to have a few drinks and play Imhotep, the board game he had just bought. It was faster paced than I expected. Good game, except that Tom won.  Then we headed over to Acapulco Joe's for our traditional farewell to Gen Con meal. Not much to say about that, I guess. It was good and, you know, margaritas.

And after that it was pretty much just winding down. We've been booking through Monday for the past several years because it makes Sunday so much more fun. It was a great Gen Con, a real vacation. Also a real expensive vacation, but oh well. 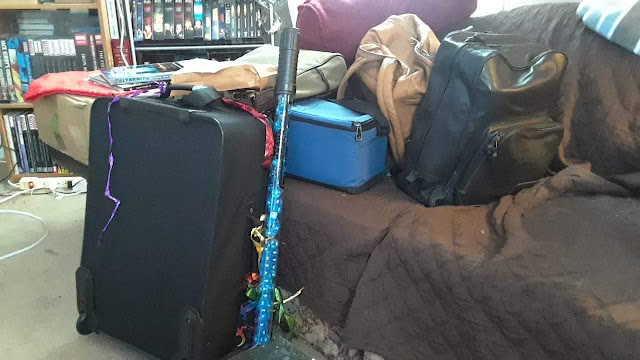