BASHCon 2018: One More Time With Feeling

Tom & I missed BASHCon last year because we were in the middle of a move, so this was a welcome return to an always-cozy gathering. As I've said before, it's almost like another "hoot" but with better gaming spaces and some extra people buzzing around. We could call this Tol Hoot 9 instead of BASHCon 33. But we probably won't.

Tom left Thursday because he wanted to have a pre-con gathering. I'm told it was small but fun, and they even got in a late-night game of Crawlspace. I wanted to avoid using my precious vacation time, so I waited until Friday after work. At some point while I was driving, Tom texted me a picture of a woman's torso.

I got in and got registered in plenty of time for Jerry's private Stay Alive game, A Little Horror on the Prairie. It turned out that everybody was still getting settled, so there was time to hang out and even look around the commerce nook. I kind of had an urge to buy some dice all weekend, but nothing grabbed me. I was presented with some shiny gold and green earrings that Tom picked up for me, though. I learned that Phoenicia had moved to a larger space upstairs, but it was still around and still delicious, so no biggie. 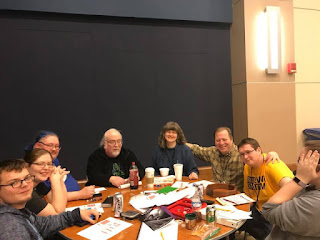 So anyway, we found a big table in the corner and got into our Wild West horror personalities. Or Wild North, I guess. I don't know word stuff. We staggered around town for a while, doing our various con artist, gambler, or general trouble-maker things, until Jerry realized that a group this big was never going to be gently steered in the time we had. It worked out to be a good balance of free-roaming versus plot advancement, I thought.

It turned out that we had even less time than we thought, as the convention staff started shoving everybody out the door at eleven o'clock this year. Nobody else had plans, so we decided to re-convene Saturday night to finish the adventure.

Tom, Paul, and I went back to our rooms to consolidate vehicles and then off to Applebee's for a late night snack. That's right, Applebee's, not Del Taco, because Del Taco -- sigh -- was gone. Anyway, I was enjoying the conversation and the weekend break from my diet so much that I didn't mind.

We slept in and took our time getting over there on Saturday. Neither of us were signed up to run games. I had planned on signing up to play some stuff, but the only thing that looked interesting was Jerry's Sunday D&D event. There was a six-hour long Marvel Super Heroes session, but... six hours. I did bring my Icons rulebook, in case the opportunity for a spur-of-the-moment adventure came up. It almost did while we were having lunch at Phoenicia with Randy & company, but then he wasn't feeling well and canceled. He said he wasn't feeling well, anyway. The rest of the crew had already left to play other games, so, with only one GM and one player, gaming seemed kind of pointless. 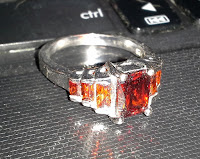 I went shopping and picked up a sparkly garnet ring from this guy who always has cool jewelry at BASHCon, and chatted with Beckett at the Weird Realms booth. Well, I went over there intending to just chat. I figured he'd just have stuff from the store that I'd already seen, so temptation would be minimal. As it happened, he had recently dug up a bunch of old D&D stuff that had just been waiting to be cataloged or whatever. I ended up with a well-preserved copy of The Isle of Dread (the real one, not the ugly remake they did for the Mentzer edition) and a much less well-preserved copy of The Lost City. My old Isle of Dread was really ratty, and I had never owned a print copy of Lost City, so I snagged 'em.

Tom was still talking to the guy who made the wrestling game after all this, so I wandered into the hall and wallowed in my swag. My copy of the Star Frontiers hardback had arrived just before I left Cleveland, so I had that with me as well. I didn't get it at BASHCon, but it kind of feels like BASHCon loot. After a while, I went back to the wrestling guy to find Tom, talked for a while, and wandered off again. Later we wandered around and found Beckett at the auction.

Once everybody was free, we had dinner at Phoenicia with most of the BASHCon contingent. Beckett was working, Paul was elsewhere, and Randy was still under the weather, but it was still a big group.

And that brought us to Little Horror: Part Two. There were actually many more previous parts, but I'm just going with the BASHCon count. Jerry found us a nice conference room to play in, and Paul joined us just in time. There was a dimension-shifting church and a bunch of frog-demons and a sudden betrayal to deal with, but we managed to get back safely. Well, Saharrah did clock her boyfriend's preacher character with a bat, but he lived. We found Denny on the way out and noticed that it had started snowing pretty hard. There had been plans for a party, but the maybe not with all the weather stuff. We did still end up hanging around and drinking a little bit with the other Red Roof denizens, so it wasn't a total write-off. 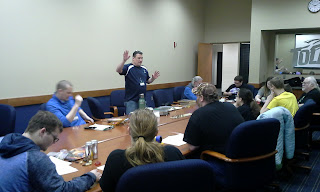 Sunday morning was the event I named this blog after, Jerry's heavily customized 2nd Edition AD&D game, One More Time With Feeling. I always look forward to this one, and I wasn't disappointed. We didn't do a whole lot because the group was huge, but we did some exploring, some drow-fighting, and some role-playing, and we achieved our objective, so it was cool.

We may have lost Del Taco, but we still had our Sunday lunchplace of choice, El Vaquero. No Beckett, but we had a big enough group to squash the other patrons in the area deep into their booths with our boisterous nerd-revelry. And the food was really good. After everybody else left, Tom & I talked to Paul a bit more and drove home.