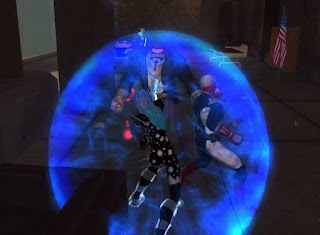 This Friday, I had to cancel a session of my Scrap Pile campaign and I still feel rotten about it. I didn't expect to. I had a really good reason, so it's not like I just blew it off. Part of it was that a couple of my players seemed really bummed about it, but I think mostly it was about missing a fix. This is a drug I can't get anywhere else.

For the rest of the weekend, I spent most of my free time playing Champions (the MMO, not the pencil & paper one). I designed two new costumes and picked up a sidekick. I played with other people a couple of times, but mostly it was just me and Indy Kid. I couldn't tell the difference between the people and AI most of the time, except that the AI would wait for me if I paused to look at something that wasn't mission-critical.

I had some perfect opportunities to write, and I didn't take advantage of any of them. I also didn't do my stupid taxes, so that's still hanging over my head. I don't mind that the government asks for some of my money so it can, you know, govern, but I do resent that it demands my time. I can't think of any other service where I have to write my own bill, and can be prosecuted for making a mistake. Also, I don't see any reason why Ohio should be allowed to govern anything. I'd rather literally burn my money than give it to Ohio. Sadly, incineration was not an option on any of the forms I filled out when I got my job.

Digression? Don't worry, this whole post is one big mass of digressions. If you're looking for a point, you probably won't want to read any further. It's not going to get better.

So anyway, writing would probably have done me good. I could have done it if, at any point, I had bothered to sit down and say, "I'm going to write." I had ideas, even. I just couldn't bring myself to make that choice.

Oh, the reason I cancelled the game is that we've got a new cat. His name is Ninja. We didn't want a new cat. We already had too many. This cat has such a sad story, though. We had this neighbor -- Tom described her perfectly: "To her, kids are pets and pets are toys." Ninja was her cat. She and her kids coddled Ninja and played with him and convinced him he could trust them. Then they moved and left him behind. He cried at their door for a week after they were gone. We should have taken him in then, I guess, but we had too many cats. We did feed him, at least.

A few years later -- last week -- I was feeding him and noticed his eye was infected. It looked at first like it was gone, but that was just because everything around it was swollen. I thought it had gotten scratched in a fight. Ninja's had a rough time on the street. He's got tattered ears and odd bumps and scars. Several of his teeth are broken. There's a patch on his tail where the hair won't grow. He looks more like a pirate than a ninja.

So we grabbed him, wrestled him into a carrier, and took him to the vet. Turns out that, sometimes, cats get an abscessed tooth and the infection gets into their eyes somehow. The vet gave him some antibiotics and gave us some eyedrops for him. He's relatively good about the drops, but it's still a two-person job. We're taking him back this week to get the tooth taken care of. He's already looking a lot better. I think he's more upset about being locked in a room than about the eye.

Yeah, sure, we could find a shelter for him or something once he's all patched up, but he's been through that before. He's had people coo over him and tell him he's safe and then dump him like old furniture. I can't make him go through that again, even if we could get him into a no-kill shelter. I don't think the possibility ever crossed Tom's mind, either. Ninja has always been a sweet cat. He does this thing where, if you reach down to pet him, he'll raise up a little on his hind legs to bump your hand with his head. He prances when you brush him, like he's showing off a new 'do. He's a person. To me, I guess, kids are aliens and pets are family.

But I was talking about a super-hero game, wasn't I? I've stumbled into a wonderful balance with that campaign. The super-hero genre is pure fantasy, a wonderful escape. I've got a great group. Not only do I enjoy their company in or out of a game, but they're all creative people who do a great job bringing life to their characters. The game itself is an absolute joy. I hate to sound like an advertisement, but Icons balances ease of preparation with detail options perfectly. At least, it's perfect for me. I can get prepped and ready to go an hour or two before the game, or I can run it off the cuff and still not feel like I've taken shortcuts. It all just flows.

Those things all contribute to making this exactly what role-playing should be, a chance to socialize and be creative at the same time, to hang out with your friends and have a great story lingering in your mind afterwards. I think the fact that it's social gives it more life than an ordinary story, almost like a real memory. It kind of feels like that afterwards, like you and your friends really did go out and save the world fighting Baron Karza last weekend.

That's what didn't happen, and it's really throwing me off.
at 1:35 PM