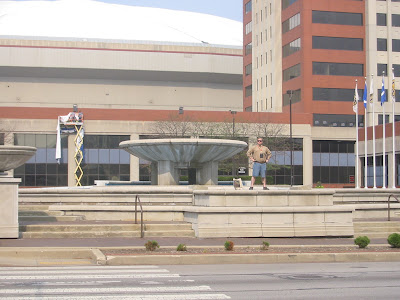 Yeah, I know - it's just a game. And if you can't get past that reaction, please just stop reading here and go lecture someone else about starving children or whatever it is that makes you feel all grown up.

It was the Friday before Labor Day. I was looking forward to a long weekend, and stopped to check my email one more time before I got in the car. My brother Mike described it as finding out that fifty of his friends had been diagnosed with a terminal illness. City of Heroes was being shut down. 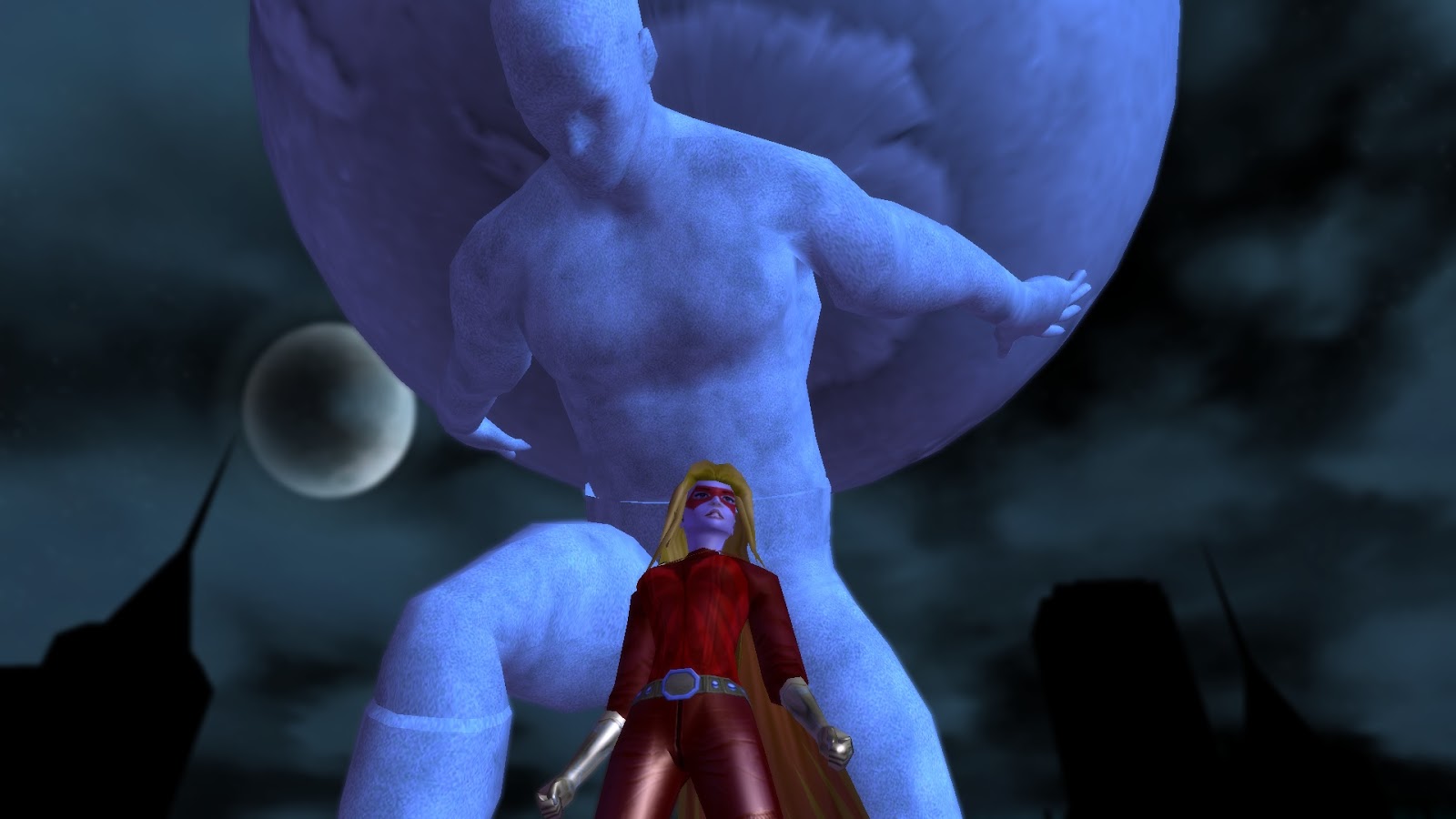 Apparently, this was done so that the parent corporation could... well, nobody's too sure what they were trying to accomplish. It was later verified that the game was still turning a profit, and all NCsoft offered by way of justification was some weaselly corporate newspeak. The suddenly unemployed members of Paragon Studios, the people who did all the work, didn't seem to know much more than the rest of us. 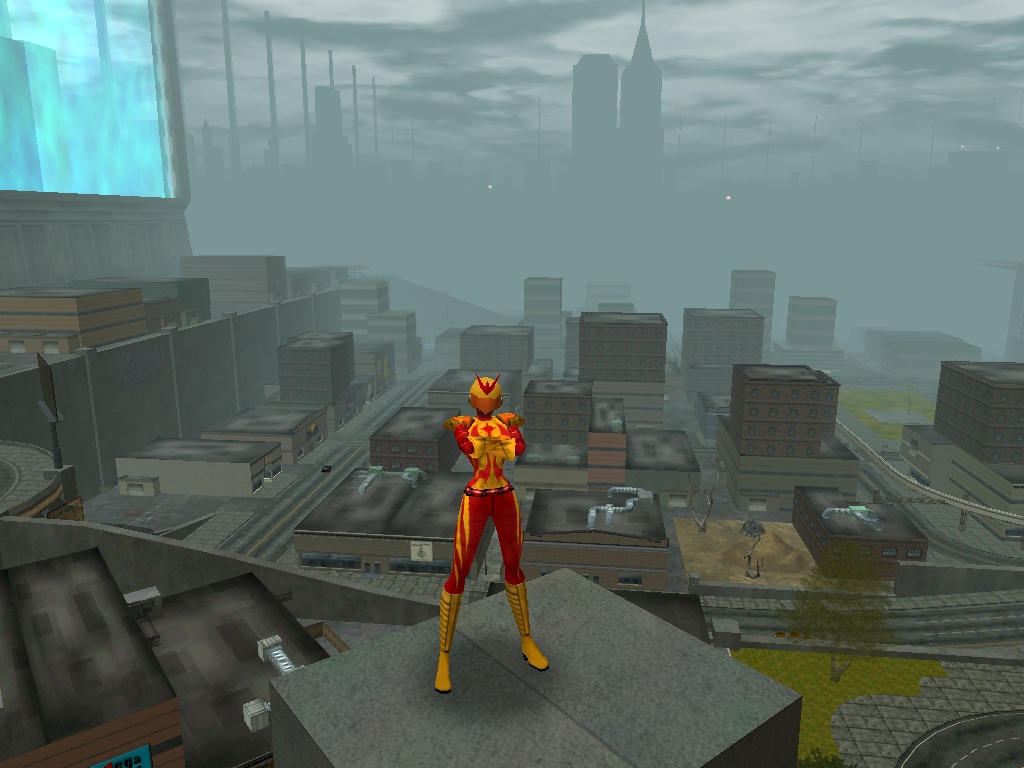 But that's not really the point, is it? Despite some valiant efforts to save them, Paragon City, the Rogue Isles, and all their associated alien worlds and pocket dimensions, are going to vanish on November 30th, 2012, probably forever. I'm writing this to work my way through it, to figure out how the cancellation of one online superhero game could hurt so much. Aaand, it's an excuse to talk about Mugged Santa again and put up some nostalgic pictures that (mostly) haven't left my screenshot folder before. 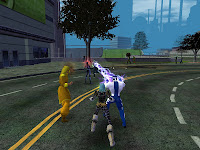 I was never much into MMORPGs, or any kind of video games for that matter. I enjoy them well enough when I sit down to play them, but somehow they never stick. So, naturally, when Mike started nagging me to try out this great new super-hero game that he and Billy and Lynn had been playing, I shrugged it off with an occasional, "eh, maybe later." Eventually, he just bought another copy of the game and mailed it to me. Well, okay, the least I can do is try it out, huh? 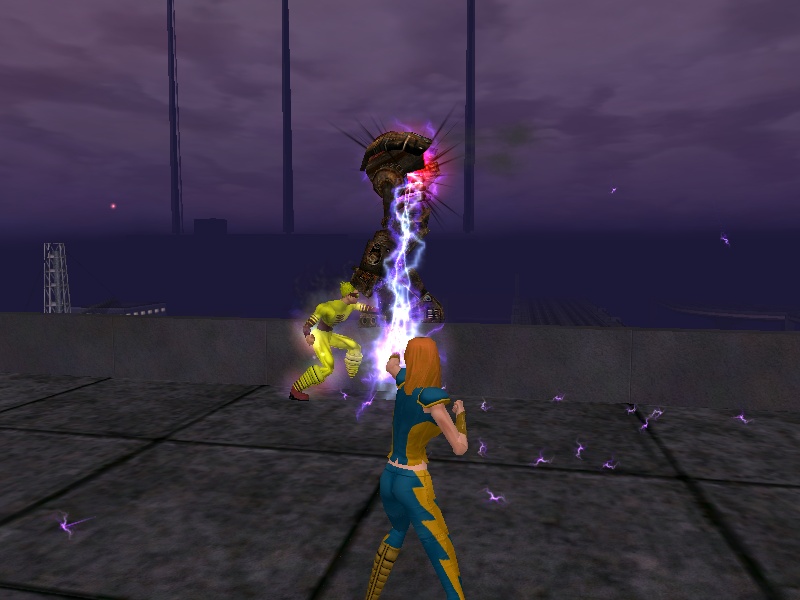 On March 7, 2005, I created a storm summoning/gravity manipulation Controller called Ki Rin and, after a brief training mission, joined Mike and Billy in Atlas Park. I can't remember who they were playing. Maybe their established characters, Neutronium and Carabiniere, but probably new characters so we'd all be the same level. We played a few missions and then I stuck around to explore a little on my own. Before the week was over, I had created several more characters, including Sunshrike, who was to remain one of the mainstays of my ever-growing horde. And I was already pestering other friends to sign up. Somehow, this game did what the others couldn't; I was hooked. 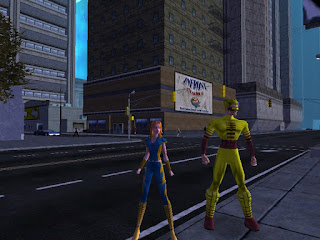 Tom watched me play it a few times and then wanted to try it himself, so he created several characters on my account. Getting more and more into playing Broccoli Mangod (or, in this incarnation, Brocholi Mangod), and The Acting Patriot, he finally decided to create an account of his own. That only accelerated things. One of us would see the other playing and jump right on. The Hunger Strike team, full of food-based heroes inspired by Broccoli Mangod and The Angry Beet, grew, along with MYTHOS, founded by Cthulhu Boy and Song of R'lyeh. Citrus Shocker and Capt. Scrappy split off to found The Scrap Pile, and will go on scrapping until The End. 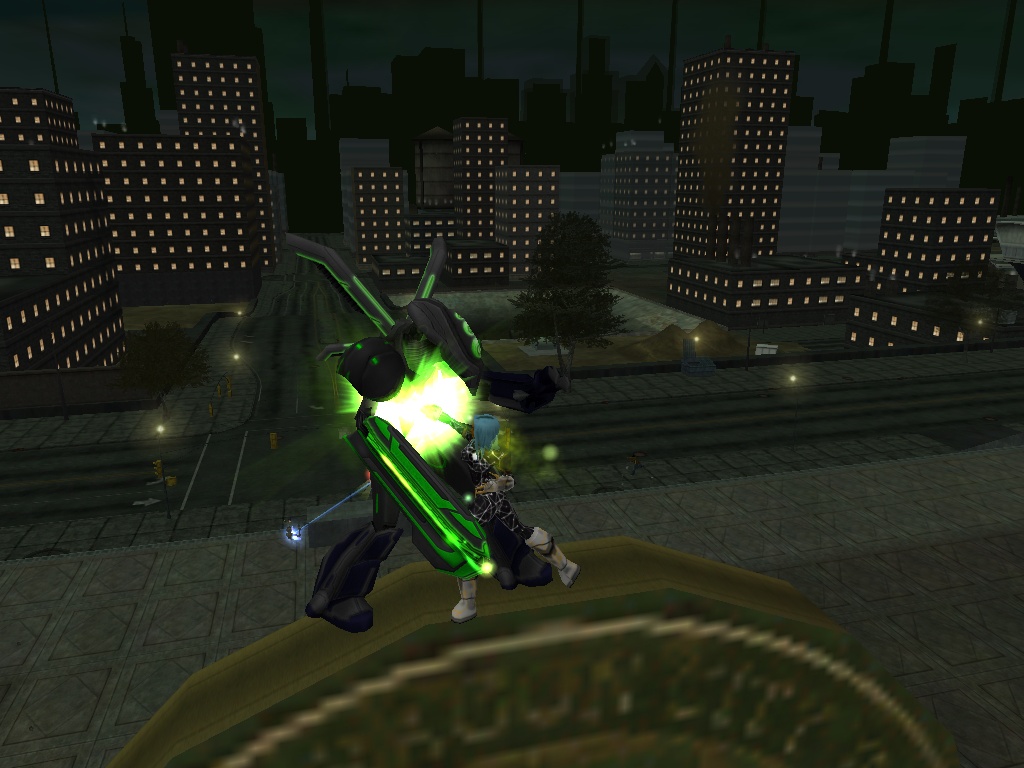 We worked our way out of Atlas Park and Galaxy City, then moved on to explore Kings Row and the deadly, shattered ruins of The Hollows. Kings Row became the source of a lot of fond memories, I guess because it was fairly easy to reach the appropriate levels (we were always creating new characters) and it was a fun area to explore, especially during the Halloween event. Broccoli Mangod refused to attack The Lost there, because he felt strongly that they were only misunderstood unfortunates, exercising their right to free assembly. In Steel Canyon, we renamed one of the ponds, "Cowards' Lake" because we always ran there to lick our wounds after starting a fight we couldn't quite finish. 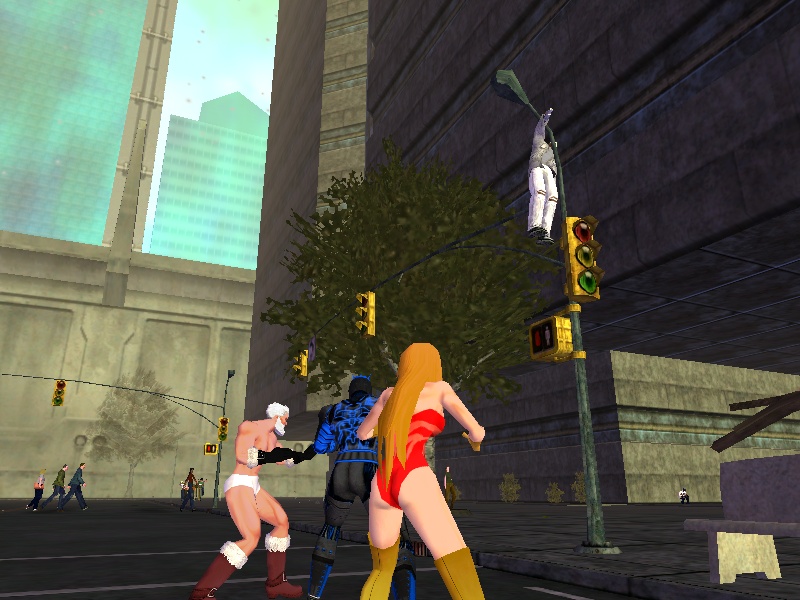 During the 2006 Winter Event, when Tom realized you could almost put together a Santa suit from the costume piece prizes, he created Mugged Santa, an old (but still ripped) man in tighty-whities whose mission was to win back his uniform from the treacherous gnomes who robbed him. Starbryte, one of my earliest characters, who had been neglected for a long time and was still only second or third level, joined him, along with people we met along the way and Mike's Frost-Brand. Absurd as it may sound, this improvised plot was the basis for my short story, "Mister Blue Sky" in the POW!erful Tales anthology. 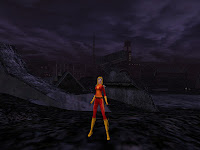 And of course, there was also City of Villains, which, as you might have guessed from the name, was the expansion that made it possible to play the bad guys. It was my birthday present from Tom that year. That was also about when Tom's co-worker Emerson joined us, and when we started our fan blog. CoV opened up new vistas, new power sets, and new inspirations (not the game term, the regular word). The tutorial was a cool prison break scene, and the starting zone was an amazing burnt-out husk of an old-timey European style city with newer sci-fi elements built over it. Port Oakes kind of reminds me of Cleveland. I will always think of Key Tower as Arachnos HQ. 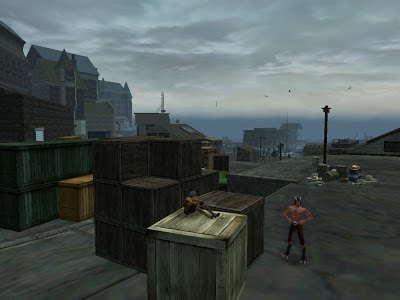 I joined in villainous enterprises with The Unbeholden (Tom's creation, founded by his Stalker, Beasty Boy,  who casually handed off the administrative duties to my Corruptor, Mistress Terror. Unbeholden is also one of my favorite group names, which will see new life in Qalidar), The Twice Born, and The Technocratic Dominion. One day during a Double XP Weekend, Zombie Lizard Moll (me), The Partying Animal (Tom), and Firetemple (Emerson) fought their way through an army of snake people and founded The Bad, The Ugly, and The Mutagenic, which, with the addition of Mike's Apocalizard and several others, would become our most active villain group. 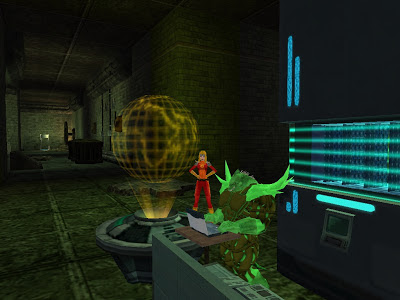 After a while, the blog sort of faded. Kind of a pity, because we were still playing a lot, and there were several later adventures that I would enjoy revisiting. We all drifted away from the game for a while because of financial issues, and I was the only one who came back with any regularity. The games I played with strangers never engendered the same kind of spontaneous creativity as our friendly sessions, though, and the stories I came up with by myself, while fun to play out, never quite seemed worth the trouble of blogging. Here are some of the posts I really enjoy going back to. Probably nobody but me, and maybe the other people involved, will feel this way, but I'm putting it all out there anyway. 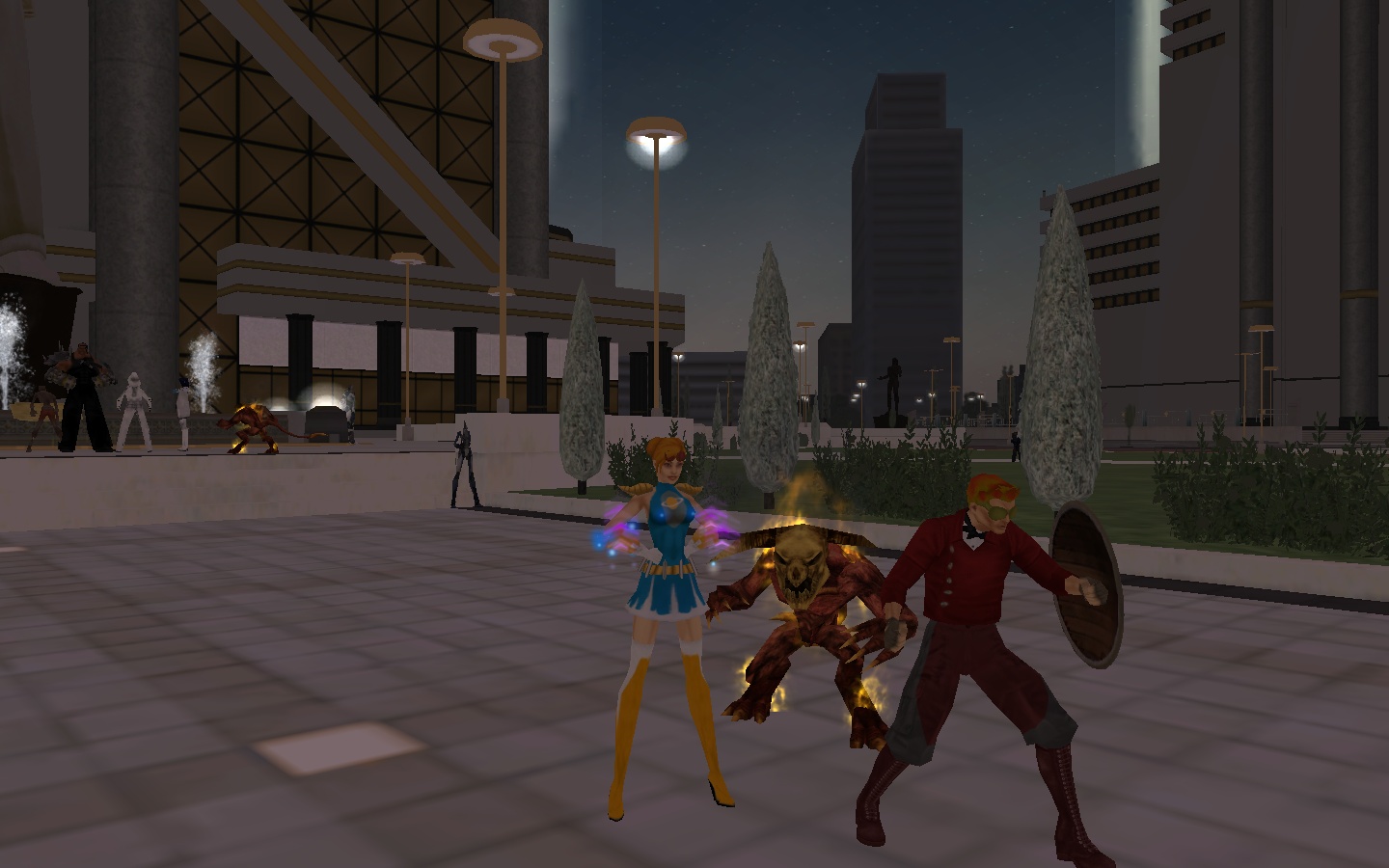 For the release of Going Rogue, they had a promotional event in which everyone who had ever had an account could play for the weekend. Mike, Tom, Lynn, and I signed on and played until our eyes bled and we collapsed over our keyboards. My character had the new demon summoning power set, naming her summoned creatures (which the character insisted were not demons, but quasi-sentient extra-temporal chaos manifestations) after my cats. There was the whole new world of Praetoria to rampage across which, sadly, I never explored much after that get-together. Also, I only have a couple of screenshots to show for the whole event. I guess I left the extra roll of film at home on that trip. 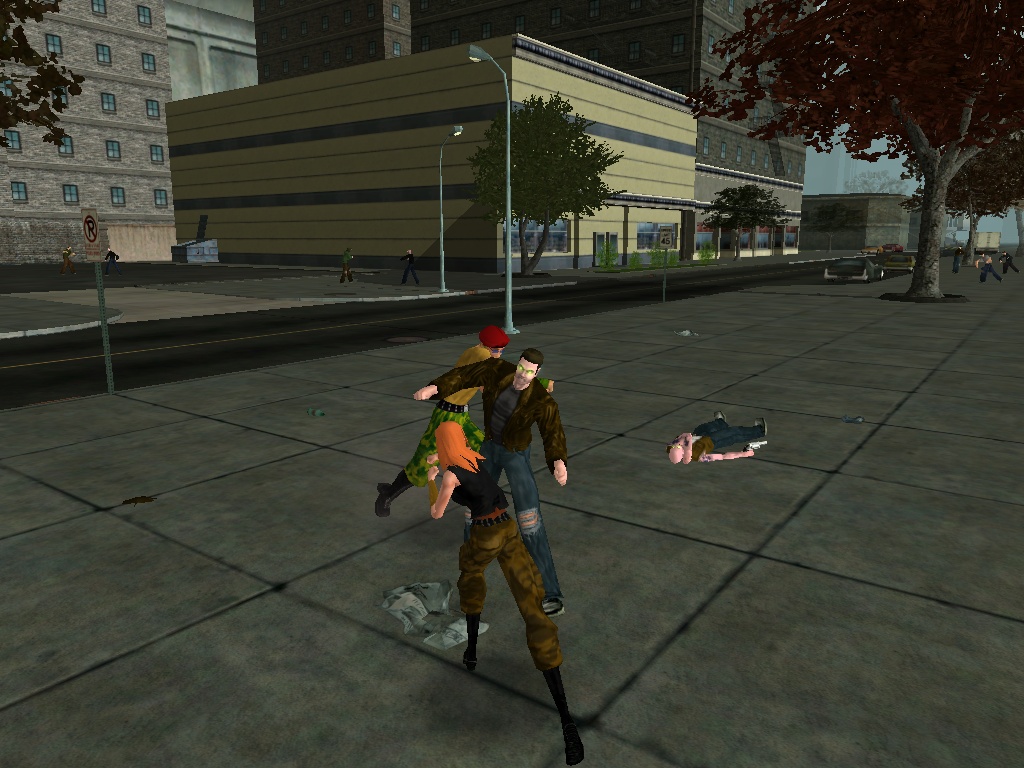 And that's what it really is - a trip. Not the drug kind, although, well, maybe sometimes, but the vacation kind. The adventure kind. Sure, the game was a way I could do things with physically distant friends and family, but it wasn't unique in that way. And it was a way to meet new people, but I do that all the time at conventions and, you know, life. Those are things I'll miss, along with the fun of just creating characters and playing the game, but what really makes it irreplaceable is that it was a unique place where we talked, explored, created, and overcame adversity together. 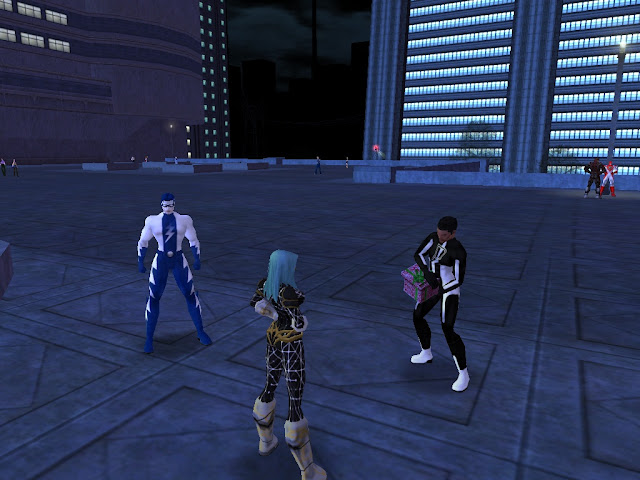 It's a place where I could revisit old ghosts at will. Walk around a virtual corner and, hey, do you remember when that gardvord knocked Scrappy off the bridge and he landed here, barely conscious, in the middle of a bunch of Lost? Remember when we first saw all those clockwork swarming around this ditch and had no idea what was going on? Isn't this where we were exiting from that sewer mission and that enormous muscle-man in pink underwear zipped by? Yeah, the exploration badge is up on this ledge; took me forever to find that one. And so on. It's ten or twenty of my favorite vacation spots, all full of old memories, all ready and able to embrace new memories, all crumbling into the abyss at the end of the week. That's what I'll really miss. 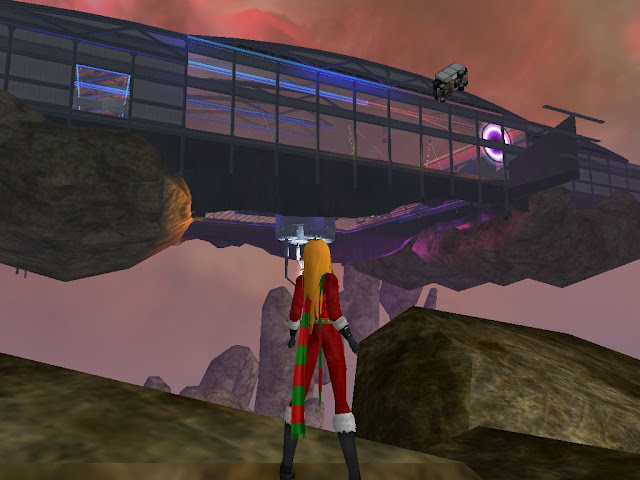 And flying. Flying is awesome. 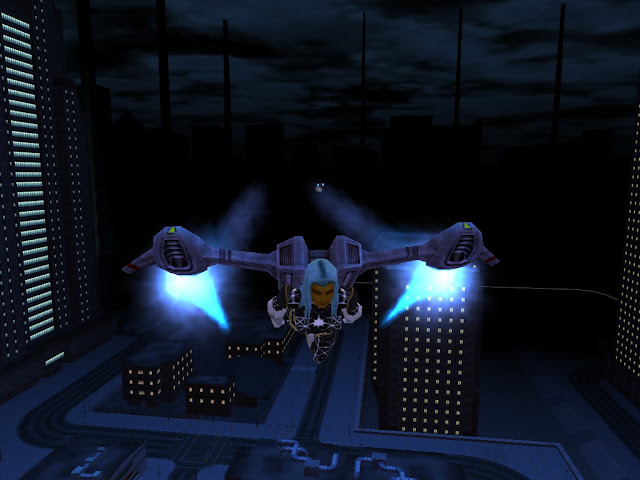