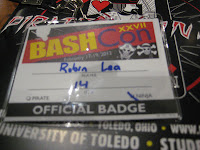 I should probably write some kind of introduction here, but I don't wanna spend all day on this thing.

Friday
We got up and got moving at a leisurely pace, even pausing to make reservations online instead of calling on the road. We were staying at the Red Roof Inn this time instead of the official BASHCon hotel, mostly because of a better location away from the jam-prone intersection. After lounging a bit, we headed over to the university to pick up our badges. Tom brought a plastic baby from when he taught CPR or something to hold Jerry’s place in line. 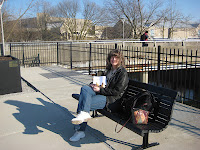 Once it got started, the pre-registration line moved faster than I’ve ever seen at BASHCon, obliging Jerry to acknowledge losing his bet by naming one of the pirates in his D&D game after the coordinator, “AquaFox.” The theme of this year’s con was “Pirates vs. Ninjas” and everyone was asked to pick one at registration. I went with ninja.

I was finished so early that, when I reflexively wandered into the exhibit hall, it still hadn’t opened. I was eventually escorted out after asking someone where Tom’s game was going to be. I heard them reprimanding the guy watching the door as I left. I felt sorry for him; anyone can kick the peg-leg out from under a pirate, but it’s impossible to control access to your space with all these ninja running around. 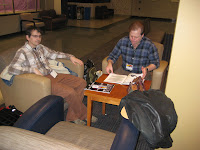 Tom, Trevor, and I eventually hooked back up in that lounge area behind the TV room. Tom still had his plastic baby. I noticed with some irritation that one of my events, the one that would have been most likely to attract new players at that, had been left out of the program, but apparently it was still in the system. But you probably don’t care about that, or the subsequent shopping trip where I picked up a couple of AD&D books to replace my damaged ones, even though I don't really know what use I'll have for them. Move along. 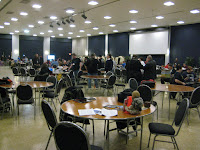 Okay, well, then there was Tom’s Tunnels & Trolls game, “Leprechaun Island.” Jerry showed up, along with Andrew and Paul H., who, having gamed and had a meal with me, is now entitled to his real name instead of “some guy called G’noll” as he was tagged when I briefly met him at Gen Con. Jerry and I played our usual characters from Tom’s T&T campaign, while the others rolled up new ones. The adventure was a tense lesson in the cosmology of Elder, full of snooty fey folk and creepy elemental creatures. It culminated in a cool scene with flying ghost ships spiraling into a waterfall that poured out of a hovering tower. Oh, and then we had to escape.

I’m almost glad we don’t have Del Taco in Cleveland. Much as I’ve come to love it, part of its charm is that it's a midnight treat to look forward to every year at BASHCon. 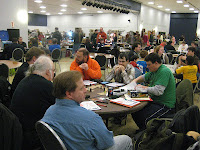 Saturday
Our first game on the agenda was Stay Alive, Jerry’s experimental zombie horror variant of Tunnels & Trolls. Paul joined us again, along with Alex and Andrew, both of whom we had gamed with before at BASHCon, and Trevor and one other guy whose name I didn’t catch. We played ourselves, gaming at BASHCon late at night when the zombie outbreak hits. This was more fun than I expected it to be, especially when Tom agreed to a plan and then changed his mind after we all split up. Yeah, we split up, but it worked! Jerry has more to say about the event in his blog. 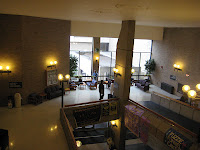 After our game-selves escaped the zombie-infested UT campus and started their journey towards the frozen wastelands of Michigan, we imitated art and walked our real-life selves over to Phoenicia, where we had regrouped after the initial outbreak. We had a full table with great conversations about gaming and foreign food, and a recital of Paul's long poem about Firefly. It was probably a good poem but, while I can read all day, I tend to tune out orators in favor of daydreams about bounding across the desert in ten-mile jumps. 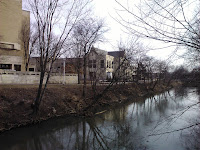 Happily, we didn't follow up by going to Michigan. Less happily, nobody showed for Shadows of Silver Cove. Tom hadn't scheduled anything for the afternoon, so we wandered around the place until the auction caught our eyes. I picked up a copy of Legion of Gold for two dollars. The Bill Willingham cover alone was a prize to me. Tom made Jerry spend more money than he should have on a dice tray, and came back with some sort of Judges' Guild space mapping thing which he hasn't opened yet, and a mangled Africa supplement for an Indiana Jones game.

It's probably best not to speak of the evening's Call of Cthulhu games. After that, DEL TACO! 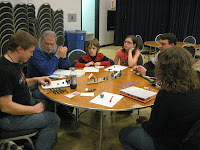 Sunday
Jerry's 2E AD&D game, "Ninja Dawn on Pirate Island" was my favorite of this year's events. It was a pretty simple plot, but somehow it just made me happy. We were pirate hunters who captured a ship destined for an island where drow were buying slaves, and that's about all there was to it. The pirate captain was named AquaFox, in honor of the aforementioned bet. I played a halfling cleric/thief and got to do a lot of sneaky backstabby stuff in combat, even taking out the eponymous ninja among a squadron of drow and their pet spiders. There were a couple of kids in the group too, which is always cool to see. Well, not always, but these particular kids were cool.

I'm tempted to write up a separate entry about my fondness for 2nd Edition AD&D and about the bizarre hostility towards it that you'll see in an outspoken bunch of gamers who adore the very similar 1st Edition, but I should probably resist that urge. Instead, here's AquaFox with the miniature used to represent his piratical namesake. And Jerry. He's not a miniature. 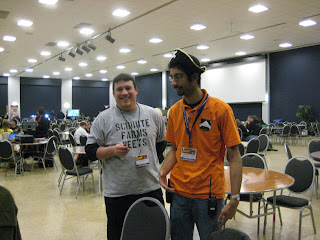 Try and pretend that there's some kind of clever and/or thoughtful conclusion here to wrap things up. 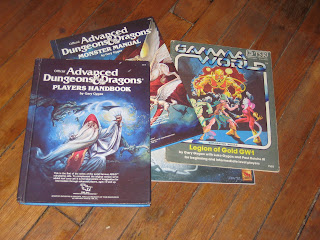