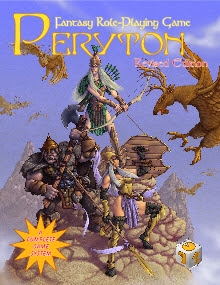 'Kay, so here's some stuff that's going on:

We stopped by the North Coast Gamers Holiday Game Bash last weekend but weren't able to hang around as long as we would have liked. Still, it was a fun visit and we had a good session of Walk the Sprial.

There was an overall positive review of Peryton RPG over at Trollish Delver, complete with a wacky troller who apparently doesn't know the difference between Tom and me.
http://trollishdelver.blogspot.com/2011/12/peryton-fantasy-role-playing-game.html

Glow World, the second part of Tom's Quest for Trollstar is out too. It's an adventure for the New Khazan setting.
http://rpg.drivethrustuff.com/product_info.php?products_id=97058

Tom has posted several installments of Trolls Upon Trolls, a series of monster write-ups for T&T. So far, he's got a Lope Troll, a Cave Troll, a Chaos Troll, and a Sea Troll. Readers are warned that these links are pure, unfiltered Tom. Enjoy in moderation.

It Came from Beyond the Stars, by Scott Malthouse, is out at DriveThruRPG and has already earned one good review.
http://rpg.drivethrustuff.com/product_info.php?products_id=97555

Over at Troll Hammer, Paul Ingrassia has reviewed Tom's Under the Sundered Moon adventure (T&T, of course.)
http://trollhammerpress.blogspot.com/2011/12/t-supplement-under-sundered-moon-redux.html