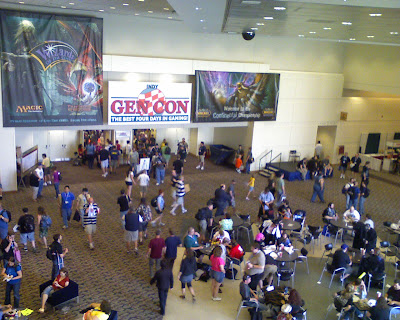 I've recently come home from yet another Gen Con. Tom does a pretty good job of summing up our adventures in his blog, so I'll leave most of that to him. And I have a public photo album on Facebook with the best of the pictures I took. I just wanted to say that I love this con more every year. It's really an amazing event. A whole clump of downtown Indianapolis - several blocks at least - is transformed for four days (and then some) into a village of gamers. Local restaurants and bars have even started putting up banners and getting their staff to wear costumes for the event.

Just being in the crowd is quite a feeling. Normally I hate crowds. Anyone who's known me long enough has watched me duck and weave desperately through a crowd, abandoning slower friends and family like they were luggage that was about to explode. Gen Con is different. I don't know if it's because the thrill of being there overrides my anxiety or just that these wandering geeks are my people, but I'm perfectly happy to shuffle through a crowd if I'm anywhere near Gen Con. This is also where I catch up with a lot of the friends that I don't see much of. Heck, it's where I met some of them.

I love to play games anywhere. Sometimes a board game grabs me, but mostly I go to conventions for role-playing games. It's great to sit down in a circle of completely unfamiliar minds and build a world together. This is not like hanging out with writers. Writers have to be meticulous designers, keeping in mind the complexities of story structure and the always-growing list of trite and otherwise verboten elements. Gamers just want an engaging world to play in, where things like "over the top" and even "derivative" are selling points more often than criticisms. This is happening all over the place at Gen Con, spilling right out of the scheduled rooms and onto any unoccupied table.

There are, of course, all the other reasons people go to the big cons: huge exhibit halls and movies and seminars and parties and zombies and industry insiders and so on. Don't take my dismissive tone the wrong way, because I love all that stuff. I just don't have a lot to say about it.

I remain torn on whether I prefer to stay at the Stone Soup Inn or a place downtown. I love the Stone Soup Inn, and the long walk is good for me. I just load up what I need in a backpack and I'm set for the day. For 2007 we got a place that was fairly close, and for 2008 we were right in the middle of the village of gamers, and that was great. Nice to be able to make trips back to the room on a whim, and not have to allow for a forty-five minute walk. It was also nice to stay late and not worry about the walk back. But I do love the Stone Soup, and this year the distance didn't trip me up much.

Next year I'm planning to run the whole sixteen hours or whatever it takes to get the free badge; partly for the free badge and partly because I've been getting into running stuff at conventions so much lately that I think it'll be a fun challenge. I've got two planned so far. I'll probably just run those two adventures several times. The first is for the planned POW! release event, "Aqua Teen Hunger Force at the Mountains of Madness." The other will be a Qalidar True20 one in which time travelers hunt down a fugitive at Gygax's famous Keep on the Borderlands. I don't have a title for that one yet, but you can expect to find the words "keep" and "borderlands" in there somewhere. I'd love to run a Peryton RPG one as well, but this True20 adventure will demand a bit more preparation than usual and I don't want to overdo it. We'll see.