Check out this four-foot polychaete worm, found skulking about in an aquarium, killing coral and fish when nobody was looking. Remind anybody of the fungi from Yuggoth? Or, better yet, the tingler? 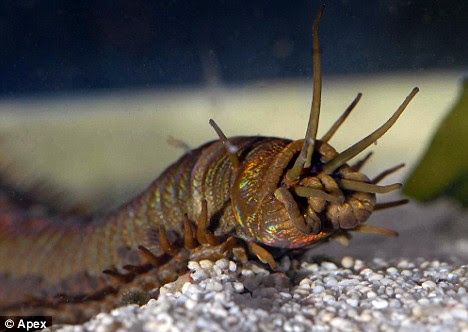 Matt Slater, the aquarium's curator, said: 'Something was guzzling our reef but we had no idea what, we also found an injured Tang Fish so we laid traps but they got ripped apart in the night.


'That worm must have obliterated the traps. The bait was full of hooks which he must have just digested.'

'We also discovered that he is covered with thousands of bristles which are capable of inflicting a sting resulting in permanent numbness.'

For the original story, go to:
http://www.dailymail.co.uk/sciencetech/article-1165930/Barry-giant-sea-worm-discovered-aquarium-staff-mysterious-attacks-coral-reef.html
at 10:48 AM