This isn't finished, but I thought since it's already gotten to the point where the first sentence is wrong (it was two Sundays ago, now) I should go ahead and post what I've got, and just wrap it up later.

This past Sunday we decided to go to the movies. Not much of an adventure in itself, but we recently discovered a new bike trail that starts near our home and runs along the Cuyahoga valley all the way to the movie theater at Valley View. It may run all the way to Akron, but we weren't looking for that much of an adventure. So we bussed it over to the Old Angle Inn for our traditional Sunday lunch, then took another bus down to Steelyard Commons (near the trail head) and started hiking, I brought my big umbrella because they were predicting thunderstorms, but Tom didn't bring anything because he thought it would just be a few sprinkles.

Despite the fact that it runs right through the city, the valley is sheltered enough that it harbors some decent forest growth and makes for a very pleasant walk. The rain started fairly early on the walk, so Tom was good and drenched before long, not wanting to slow us down by huddling under my umbrella. At first the trail favored the river or some tributary, but then it joined up with an old canal trail and stayed mostly on that side. We passed a few bikers, a whole herd of joggers, and several other walkers going the other way, not seeming to mind the rain too much. We got to watch a train go over on a high bridge (I snapped a picture) and encountered a few branches with somewhat puzzling signs but decided not to indulge our curiosity this time. After all, the straight path along the canal was just as new. 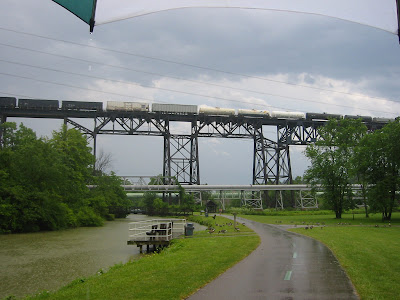 Later the path got a little twisty and started going under unfamiliar bridges and we started wondering if we were going the right way, until we caught sight of
at 10:13 AM