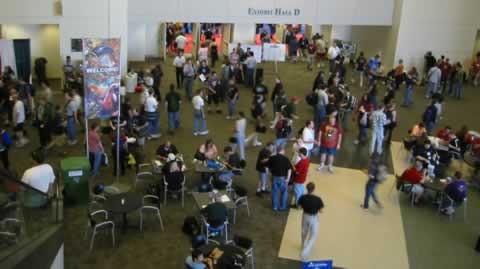 Tom and I went to Gen Con Indy (first Gen Con for both of us) this past weekend, and it was the most fun I've had in a long time. For one thing, I love to travel, even if there's no big event at all. For another, GEN CON ROCKS! Where else can you go out to the local bar and see a guy dressed like a Roman legionnaire to one side, and overhear a conversation about last night's dungeon crawl from the other? Okay, in a geeky, fantasy world kind of way, it rocks. Not in a college party, drinking-things-on-a-dare kind of way. But I'm a little old for that second one, and the great thing about games is, you're never too old to get yer geek on.

Actually the first part of the trip did involve some drunken revelry as we stopped off in Dayton to celebrate a friend's birthday. We got a room at a motel and, after dinner, went bar hopping in the "Oregon District." They had several cool places here, including one that featured a live jazz/blues/whatever band and a very pleasing combination of the scents of cigarette smoke and pizza. We ended the jaunt at an Irish pub where one of our number had to go home without the potato soup she'd been craving because the kitchen had already closed.

After a few hours of sleep, Tom and I got up early and finished the drive to Indianapolis. I like Indianapolis. Traffic is a little harder to manage than Cleveland, but hey, Tom was driving so it's all good. My only gripe with the place is that the area is so flat. Even the river barely cuts an indention. Great for farmers, I guess. Kind of unsettling for me, though. Parking at the convention center was somewhat expensive, so we decided that the rest of our visits would either be on foot or by taxi (yes, a cab was actually cheaper than a day of parking). 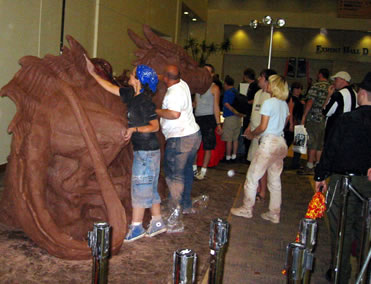 We were late for the first event on my schedule, an 8 AM first editon AD&D game which Tom had declined for religious reasons. I heard later that it was cancelled anyway, because nobody else showed up, either. Having a little time on our hands, we wandered around and tried to get a feel for where everything was, which turned out to be quite a daunting task. There was something to check out no matter where in the gigantic convention complex we drifted, though, so that in itself was lotsa fun.

After a brief interlude to check in to our bed & breakfast, the Stone Soup Inn (which I highly recommend to anyone visiting Indianapolis) we returned to jump into our first RPG together, a game called Asylum. The game is set in a future where some kind of green stuff had grown over the sky and made everyone insane. The closest thing to a social structure is the group of "wards" scattered around over old cities. The administrators and orderlies are, of course, just as crazy as the inmates. Bullets and sedatives are the main currency. The mechanics are mostly based on ability checks, but there's a cute twist: instead of rolling dice, you draw from a bag of marbles, the color combination determining the number. The joke of course is, "don't lose your marbles."

First we were told that only rarely did any group even get started on the story. We began to understand why after we got our characters. Mine was a bipolar hoarder. We had a serial killer and a compulsive tour guide cowgirl. We had "Dancing Boy." We also had Tom's paranoid group leader, a depressed drug addict of some kind, and a hyperactive pyromaniac.

We did manage to get through the story, but we had three casualties before we even started. The serial killer strangled the doctor, which made the paranoid decide to shoot him. I decapitated the tour guide when she tried to grab my stash. Then I added her head to my hoard. The plot we ran through involved a beauty pageant in future Miami, or "MyWard." Our motivation for entering was that the winner would be granted a staff position. After more wild insanity and personality clashing, we had to face the judge, a giant alligator. A couple of us got eaten at this point. The drug addict had bribed an orderly earlier and he survived, so he was announced as the winner. His prize was to be taken off and experimented upon.

After escaping the Asylum, we meandered about, finding the twenty-four hour movie rooms (anime and kung fu) and exploring the enormous dealer's room. We had lunch and made our way to "The Business of Fantasy" where a writer named "Kij" told us how to communicate with editors. 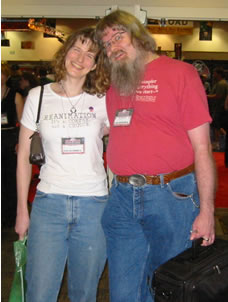 Tom was signed up for "All Flesh Must Be Eaten," a zombie-fighting RPG, that night, but I wasn't. There had only been one slot left, and we flipped for it. While he got settled, I wandered off to the anime room and watched a funky take-off of Seven Samurai called Samurai-7. After a while I drifted back to see how Tom's game was going. I got there just as the guy who wrote the adventure (and yet was also playing the leader of the squad) was leaving. The GM was good, but I wasn't too impressed with the game. How many sessions is a game that's about nothing but zombies good for? I could have run the same adventure with Call of Cthulhu or lots of others.

On Friday, we blew off another 8 AM event (a seminar) and later made it to the "Chaosium Unplugged" where we celebrated Lovecraft's birthday with a very black chocolate cake and a brain in a jar. Then we did the "World Building for RPG's" seminar, featuring Matt Forbeck, GURPS Guy, White Wolf Guy, and Ed Greenwood. Tom and I were both really impressed with Ed Greenwood, and told him so after the lecture. After that we kept running into him in the halls. Anyway, it was a good seminar, with some fairly interesting advice, including, "use the Catholic Church; it's the best role-playing supplement ever made," from White Wolf Guy.

Saturday's agenda began with a traditional (by which I mean not a CCG) card game called "Igor: The Mad Scientist's Lament." The goal in this game is to assemble a number of bizarre devices before the other players can do the same. There are several blueprint cards and component cards that you use to do this, and "evil laughter" cards which you use mostly to frustrate your opponents. The component cards fit together based on border symbols, kind of like dominoes. Tom won, I think. After that we went back and started buying all the goodies we'd been looking at, and hit the "Madness 101" seminar by White Wolf. I thought the psychiatrist who ran it was very interesting, but Tom was bored. We went to watch the costume contest, but couldn't see anything except Boba Fett guarding the door, so we left. After dinner with the innkeeper (who is a gamer himself) we went to the Knights of the Dinner Table live reading, and then the Cthulhu for President rally.

The only official event we got to on Sunday was Richard Hatch's "Battlestar Galactica and Beyond" seminar, where we got to listen to some fine motivational speeches and see trailers for movies that don't exist. We did run into David Carradine in the bar, though. Tom bought him a drink, which turned out to be a triple vodka, and Mr. Kung Fu shuffled off to continue getting plastered. I passed Virginia Hey (Zhaan from Farscape) in the restroom, but she was the one on the way in, so I figured it would be a bad idea to say anything but, "hi." 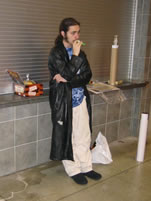 As we made our final circuit of the convention hall, we came across a solitary fellow Cthulhu-campaigner listlessly playing his kazoo (noisemakers were handed out at the rally). It was definitely time to go. I suppose the fact that we were pretty much broke didn't hurt, either.

On the way back we stopped to visit Caed again, had some excellent Mexican food and went to see a gigantic fountain. And, other than a foggy detour past Mount Gilead, that's it. Can't wait for next year!