Had a great time at BASHCon this year. We missed out on gaming with Jerry because he put his Friday game in the system and a ton of people signed up for it. Tom and I would have been late anyway, so maybe it was for the best. The rest of us just arranged to get together for private games because convention registration was a mess.

Chili's was good, met Liam's friend Max, conversation, all that. Tom canceled his Saturday morning game on Saturday morning, which made his upcoming award ceremony even better.

All the usual stuff: vendors, auction, the always-awesome Phoenica restaurant, the cool student center. I got some loot and Tom surprised me with a t-shirt. 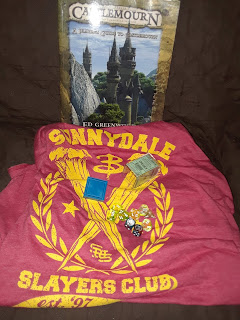 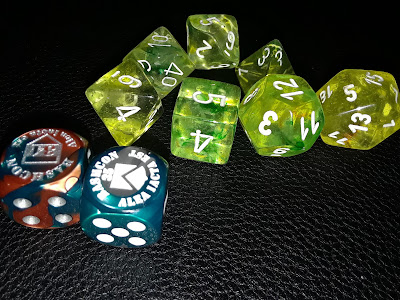 Cory ran Feast of Legends, an RPG designed by Wendy's as some sort of bizarre marketing scheme. The menu puns are hilariously corny. We had fun being all stupid and corporate the whole time. Cory hammed it up just right. 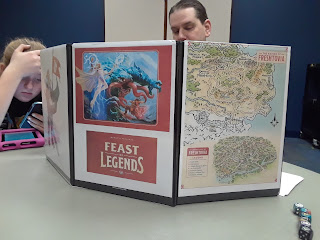 My Gangbusters game started off normal enough, with a gang of whiskey runners trying to find out how a rival gang was suddenly getting so much cheap, high-quality booze. Then it started getting weird, with a whole town coming out at night to search for bits of something in the grass, then screaming like pod people upon seeing an outsider spying on them. Then it was all monsters and slime and a meteor and a creepy old lady talking to metal box which she called, "mother." Tom has a bit more about it in his blog.

I always wanted to do a surprise session like this, because there's one thing about horror games that always gets lost because the players know they're in a horror game. If people were really exposed to freaky supernatural stuff, they would keep looking for another explanation. Part of the horror is the inability to accept it. And it worked, which is good because now they'll always see it coming, even when it's not, so this was my only shot.

At the El Vaquero after-party, Jerry and I presented Tom with his Quitters' Club award. 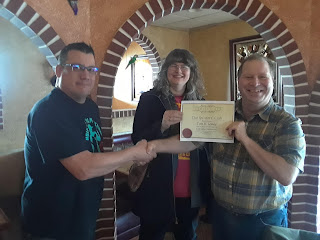 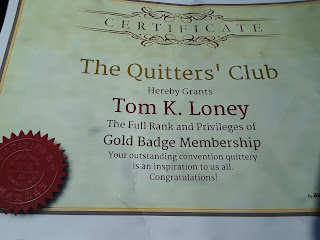