Email ThisBlogThis!Share to TwitterShare to FacebookShare to Pinterest
Labels: humor

Cool Stuff from the Mail 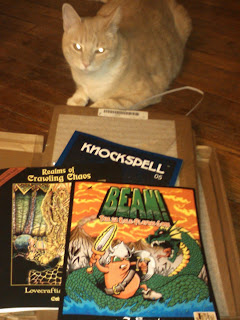 I dreamed I was traveling, catching buses in the rain and rushing through crowded airports. Naveen Andrews was in one of the airport bars telling stories, but I couldn't follow the plot because the bartender kept grabbing me to natter on about the flooding in Vicksburg. My clock radio may have been to blame for that last part.
at 9:18 AM No comments:

Warning: this post has nothing to do with CSI anything. Not even Transylvania.

I recently finished reading Dracula (yeah, somehow I never got around to it before, but the magic combination of public transportation and Kindle has me catching up on a lot of reading) and noticed a couple of things. Lots of people whose jobs depend on reading books and saying clever things about them have read this book, so I don't really expect that I'm the first to make these observations, but hey, I've never heard them before, so maybe you haven't either.

The first is that I was kind of surprised to see Dracula described by Van Helsing as brilliant, but with a "child's brain." The explanation given is that this is a consequence of his transformation to a vampire and the condition is slowly fading, but his general description of Dracula's thought process is not a bad one for psychopathic serial killers in the real world. I wasn't expecting to see this in Dracula.

The one I found really interesting, though, is that Stoker seems to have gone out of his way to create a villain whose most fearsome natural enemy is the accountant. The Count has this grand plan to come creeping out of the darkest pits of the Old World and drag the people of London back into fangy serfdom, but he's got some issues. He has to sleep in his own special dirt, and he needs a place to hide while he's in a torpor. He even needs special transportation arrangements because he can't cross water unless somebody carries him. So how do you fight this dreaded monster from the past? You collate your documents. You make charts. You call up realtors and travel agents. Dracula may be more afraid of crosses and holy crackers, but what really kills him is modern bookkeeping.

So, you know, if you run into a vampire these days, don't bother making the sign of the cross; flash your smartphone at the bastard and watch him slither back into the Cold War.
at 11:21 AM 3 comments:

Getting near the end of Season 4 in Lost (yeah, I can't believe I didn't get into this while it was on TV) and damn, that marine is an asshole! I guess it's sort of a "boy named Sue" effect, though. I mean, Keamy? Makes me wonder how bad his first name must be, to drive him into a field where he's called by his last.

"Hey, Wiggledog, come here and help me out with-"

"Shut up! Just shut up, damn you! It's Private Keamy now!"