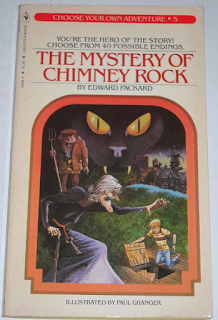 A few weeks ago, something -- I don't remember what -- reminded me of those old Choose Your Own Adventure books. With that, I immediately thought of The Mystery of Chimney Rock. I used to love this one when I was a kid. In a sudden fit of nostalgia, I looked up a copy and bought it. I don't know what happened to my original one. Boxed up in an attic somewhere, probably.

I played it through a few times and then discovered that several pages were missing at the end. Could be worse; at least I got to finish a few threads before I hit the wall. After that, I spent a little more time just seeing what else there was buried in the pages. There was a lot going on that I didn't remember, so even though it was disappointing to not be able to explore correctly, I had fun.

The other thing is, I started thinking that this would be a cool scenario to run as a real RPG adventure. I've always wanted to do a good haunted house scenario. I've tried a couple of times, but it never really felt like what I wanted. This book gives me some new ideas. Several of the threads seem to contradict each other continuity-wise, but I don't think reconciling them will be very hard. I was toying with the idea of running with the bit where it gets bulldozed at the end for condos, but I'll probably keep the house intact. I also thought of a way to merge the two that might be fun. We'll see. For the system, I'll probably use Vortex (the system behind the Doctor Who RPG) because I use it a lot and am very comfortable with it. Crawlspace is a possibility, though.

I won't be running this at Gen Con because I'm already signed up for my stuff there and I don't want to have to think about any new scenarios this summer. Maybe Carnage if I go. Or maybe I'll just run it for my friends.

I have this thing I do to relax sometimes. I imagine myself floating on my back in the ocean, but only for a moment. Then I start to sink. As I watch the sun sparkle on the surface above, I sink right out of my skin. It's not scary or painful. It's kind of like when you peel off the dead skin after healing from a sunburn. I'm done with this ugly thing; let it float away. The light on the surface gets fainter and bluer and farther away, and I shed all the muscle and cartilage and tendons and vessels and all that gunk as I continue to sink. The same with the viscera, nerves, brain, everything soft, until I can't see the light above at all and I'm only a pure, white skeleton sinking through black water. But even my skeleton is worn away as I sink through the sand, and it's only my naked Mind that seeps into the rock below. And I'm free. I'm far away from everything that lives. None of the nattering voices, the obligations, the rules, the noble fucking causes, none of that can reach me. I'm free from all the aches and pains and itches and urges of the body I've left behind. Finally, in that dark, silent shelter, I can think for myself.
at 8:42 PM 1 comment: