This past Sunday we kicked off my new Doctor Who campaign.  Shelly and Jack came over, and, since we moved it to a day he wasn't working overtime, Tom decided to join in.  I had a nice little low-key introductory scenario in mind where a group of present-day Earthlings are amazed to discover that there's a great gonzo Doctor Who cosmos out there.  I was putting some last details together while they passed around the Player's Guide to make their characters.  Then Shelly asked me if she could play a 51st century time agent.

Technically, it's one of those special options that the GM can freely rule out, but - come on - how could I ever show my face at a convention again if I told a player in a Doctor Who game that she couldn't be a time agent?  And what kind of GM can't work around a little surprise?  Also, I'm trying to win over a bunch of hard core T&T fanatics to a new game, so I have to use all the enthusiasm I can find, right?

So here's what we ended up with:
Everyone took their time on the characters (except Tom, who always breezes through that stuff) partly because I was the only one who had played the game before and partly because it's a point buy system, so it's never going to be one of those "roll up a character that you'll most likely kill before morning and rock on" games.  Still, with attributes on a point-for-point scale, only twelve skills, and traits that only get complicated if you want them to, it's a quicker start than a lot of games I've played.

Anyway, the point is, this wasn't going to be a long session.  Aaaand, I think I'll go to bed now and finish this later.
at 12:14 AM 2 comments:

Email ThisBlogThis!Share to TwitterShare to FacebookShare to Pinterest
Labels: Doctor Who, DWCampaign

I hope to put up the summary of Sunday's Doctor Who game soon but, for now, I just wanted to say what a weird day this is.  Woke up around four in the morning to a blacked-out house, found out later it was all over Cleveland and nobody seemed to know why.  Walked to the bus stop in a cool, peaceful fog with no street lights.  Whole thing has a very otherworldly feel to it.  Latest thing I've heard is, "a preliminary investigation shows a protective relay sent an incorrect signal to a major transmission line, shutting the line down."

When the fog rolled in and the power went out, I was sure I was finally going to have to pay the price for Grandpa burning down that leper colony on Lake Erie.

I occasionally check my horoscope for the same reason I read fortune cookies or listen to Rush Limbaugh. It's fun and sometimes the inkblot of untethered assertions makes me think of things I wouldn't have otherwise.  I must admit, though, that today's horoscope almost has me worried:

Scorpio
Sorry an error was encountered while loading your horoscope.

Did my future just blue-screen?

Email ThisBlogThis!Share to TwitterShare to FacebookShare to Pinterest
Labels: humor

The Secret History of Troll Hoot 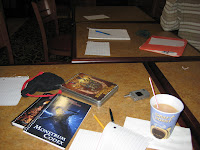 No one can tell you what the Troll Hoot is, Neo; you have to see it for yourself.

A few years back, we got the idea that we could get together with some friends scattered about the Ohio area for periodic gaming.  Nothing too serious, just every few months.  We started out with a trip to Columbus for some Call of Cthulhu at the Red Roof Inn.  That was fun, but we never really followed through.  A fair bit later, Tom started announcing an upcoming "Troll Hoot" in Dayton with an open invitation to not only our current friends, but the whole Tunnels & Trolls (hence the name) community.

I thought it was a bit crazy, announcing this like a convention when it clearly was not, but Caed-Robin, always up for a party, signed on, followed soon by our friends-to-be, Mandy and Steve (and their dogs). We gamed and ate out and lurked in the gloomy bar and generally had a blast.  So, there it was, a weekend of Tunnels & Trolls (and one of those trendy card games which I slept through) pulled off with no regrets.  Even the run-down hotel was good for a laugh.  We all agreed to do it again in a nicer place next year.

In the midst of all this, we met Monk at one of Tom's Gen Con events and they started chatting online.  When we announced Troll Hoot II, Monk said he would be flying in from Arizona to attend.  I kept asking Tom, "Does he realize it's just us?"  Apparently he did.  This Troll Hoot began the tradition of people running games other than T&T, with Monk adding some TAG to the mix and Steve introducing us to Rifts.  Troll Hoot II also began the tradition of Caed promising to join in but ditching, and me scheduling a Star Wars event and then canceling it. Robins are fey and unpredictable creatures.

We skipped a year because 2009 was kind of crazy but, in 2010, with a lot of help from our friends, another Troll Hoot fell together, with a new player at that.  I really couldn't complain anymore; the silly name worked.  The non-con lives on.

So far, I've always left it to Tom to write these things up, so the summary blogs listed here are all his:


Troll Hoot IV is in the planning stage (update: see here instead).  We're thinking downtown Mansfield in late April or early May, and I'm giving up on my old Star Wars event (which I did finally run in Arkansas, inadvertently kicking off a campaign that went on without me) in favor of the game I'm currently infatuated with, Doctor Who.

Looks like my Doctor Who campaign with Jack and Shelly (and Tom?) is a go for Saturday the 25th.  I'm planning to have them make up their own characters rather than play the Doctor and companions.  As much fun as it is to run the familiar stars in one-off sessions, I think the focus on imitation would stifle any kind of character development in a campaign.  Besides, I'm always eager to meet the new faces that my friends put on at the game table, and they wouldn't be new if they all came from the show.

Already got some ideas for hurling them into the Time Vortex, but I want to see their characters before I set it in stone.  I'm putting together a some details of a setting and some creatures & NPC's for a first adventure, which hopefully I'll be able to arrange on the spot for our first session.  Jack & Shelly don't have the books, though, so we'll also be making characters at the table, and I suppose it's possible that they'll come up with something that'll require more detailed adaptation.  We'll see.  One of the things I love about this game is that it's really easy to improvise with.
at 10:44 AM 1 comment:

Email ThisBlogThis!Share to TwitterShare to FacebookShare to Pinterest
Labels: Doctor Who, DWCampaign

I just got started working with my new collaborators and I'm pretty excited.  As you can see, Antigone here has worked her paws to the bone this weekend and finally collapsed over the keyboard. 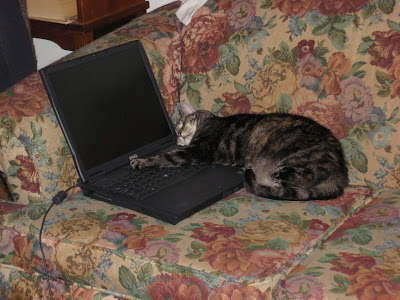 Unlike some cats I could mention, who just play on Facebook all day. 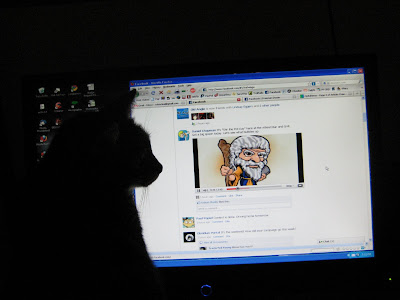 "Oh, mighty statue of the Most Holy Creator, we high priests of the Old School have come to make this offering of polyhedra and to seek any new wisdom you would offer us."

(and the sound you just heard would be the entire Order having a heart attack at once)
at 9:12 AM No comments: