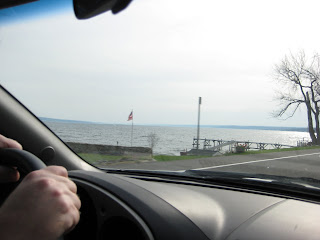 A few weeks ago, Tom & I went to the Carnage convention in Vermont. The con and the night drive over the mountains to get there were fun, but we can talk about that later. This is about the trip home.

Since we both had a day to kill, we stopped in Syracuse on the way back to Cleveland and spent the night at an old hotel downtown. Park View or something like that. We ate at a barbecue place with "dinosaur" in the name and then went back to our room to crash for the night.

The next day, instead of getting back on the expressway, we picked up a New York road atlas and took off in roughly the direction we wanted to go, figuring out our route as we went along. We ended up driving along Cayuga Lake towards Ithaca. Neither of us had been there before, although Tom had once played a game where it was the supernatural center of the Americas. 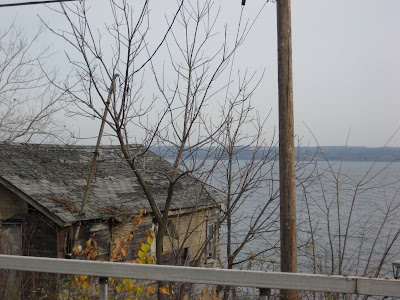 After a fairly scenic drive along the lake, we found Ithaca and rather liked the look of it, both of us agreeing that we should come back some time when we could really explore the town. We weren't intending to stop but, on the way out of town, we saw this: 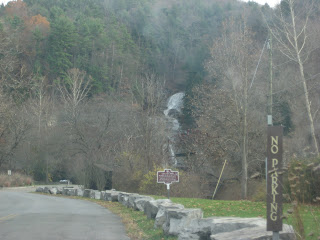 Not wanting to let that pass without at least getting a picture, we turned around and stopped at the park, learning that we were at "Buttermilk Falls." We didn't really have time to take the hiking trail, but we had a look around the waterfall and stretched our legs a bit.

We took a lot of pictures but, since you can go buy whole calendars full of professionally photographed waterfalls if that's what you want, I'll only bore you with a couple more of our shots.

First, here's one looking the other way: 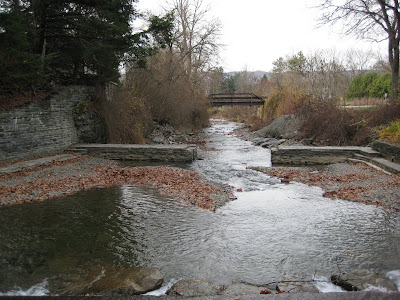 And here's another one of the lower part of the waterfall: 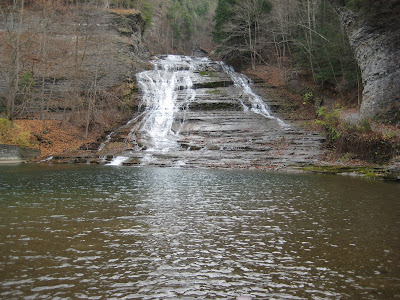 Thinking that this would be the last adventure for the day, we got back into the car and picked out a new course towards Erie, where we intended to re-connect with the expressway. Out in the middle of nowhere, however, we passed a sign advertising a place called "Tag's Tavern." TAG, of course, is the name of Tom's homebrew RPG (short for "Tom's Adventure Gaming") so we had to find the place and stop for a drink, no matter what kind of dive it turned out to be. 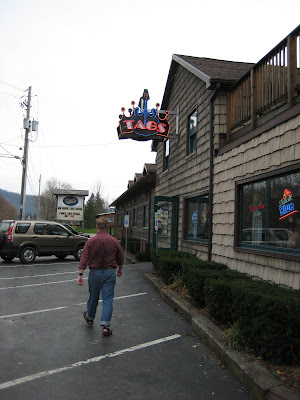 But it wasn't a dive at all. It was apparently kind of famous, with memorabilia from all kinds of bands that had performed there. We sat right across from a guitar signed by all the members of Styx. They also had great food and friendly locals with none of the Lovecraftian insularity we had encountered in Vermont. (Okay, we met plenty of nice people in Vermont too, but the cranky ones are more fun to talk about.) Of course, they weren't so friendly that we could admit to them why we were there. The official story was that we had to stop here because "Tag" was Tom's old nickname. 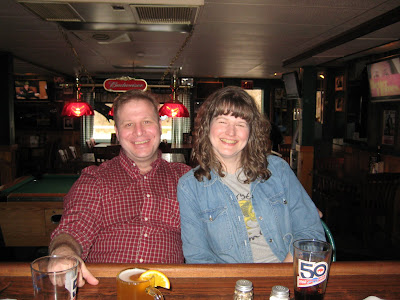 From there it was pretty much a regular drive. We never would have found any of this stuff if we hadn't wandered off the track, though. And that, folks, is why I love traveling with Tom.
at 9:10 PM No comments:

Checking on a quote from Shaft, of all things, I stumbled across this:

How about you? Can you answer those children and parenting questions?
at 10:05 AM No comments:

Your Very Own Constitution

This is almost too dead-on to be funny.  Almost.

Area Man Passionate Defender Of What He Imagines Constitution To Be
The Onion, November 14, 2009

ESCONDIDO, CA—Spurred by an administration he believes to be guilty of numerous transgressions, self-described American patriot Kyle Mortensen, 47, is a vehement defender of ideas he seems to think are enshrined in the U.S. Constitution and principles that brave men have fought and died for solely in his head...

"Right there in the preamble, the authors make their priorities clear: 'one nation under God,'" said Mortensen, attributing to the Constitution a line from the Pledge of Allegiance, which itself did not include any reference to a deity until 1954. "Well, there's a reason they put that right at the top."...

What they really need to do is remove the brains first, then keep them floating at various levels in one giant vat with a big glass wall so you can see them all.  I'm thinking supercooled liquid, maybe pale green, although that's awfully traditional.  I suppose they could go with something more daring like yellow or sky blue.  It also depends on what kind of lights you have flashing on your gigantic instrument panels.  And the uniforms your henchmen wear, of course.

Once they've got the color scheme down, all these brains need to be wired together so they can be turned into processor components for a super-computer that tells the future.  Or at least one that can beat that damn chicken at checkers.

The Pentagon's mad science division has a new way to deal with the 70,000+ troops diagnosed with traumatic brain injury: freeze 'em.

Darpa, the military's far-out research arm, is looking for research projects that would create a "therapeutic hypothermia device" to prevent traumatic brain injuries from causing permanent molecular damage to the brain. The idea is based on successful studies that used cortical cooling to treat survivors of strokes and cardiac arrest. According to Darpa's solicitation, cooling down the brain after trauma can offer "dramatic neuroprotection" that will prevent long-term harm to cognition and motor skills...

The Cool But Fishy History of Cleveland

A friend introduced me to this blog with some great pictures from old postcards and information about Cleveland's history.  What frustrates me, however, is that there is not a word about the war with the fish people that established Cleveland's independence from the decadent Under-Erie Empire.  I know the pictures exist.  You can even see the crumbled remains of some of the war memorials, and anyone who has driven in town knows that the original city planners were not human.  Remnants of fish people architecture are everywhere, even showing up a few times in this suppressionist blog, although of course they are never named for what they really are.

It's a neat site, despite the conspiracy.