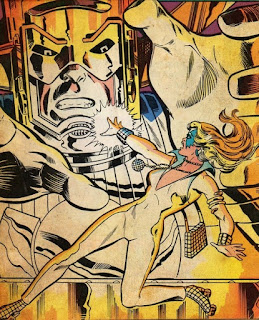 Email ThisBlogThis!Share to TwitterShare to FacebookShare to Pinterest
Labels: SuperHero

The writing is going well. I've got the heroes crammed into an underground labyrinth loosely based on a real cave, and further developments are revealing more about why Ezren acts the way he does and what he's up to.

The reason I'm posting this, though, is that, after a long hiatus, there's another Scrap Pile event in my schedule. It's likely to be followed by yet another hiatus, so I want to make it special. Luckily, I was already planning to present this as Giant Size Scrap Pile #3 because it would have been a sort of "welcome back" kinda thing. I've already written down a lot of what I wanted to do, so the adventure just has a few kinks to work out and a few more details to write down.

Looks like I'll also be running a game of Timewatch at some point.

Also, the Greyhawk campaign is still going strong. We're playing that next week, too.
at 12:11 PM No comments: