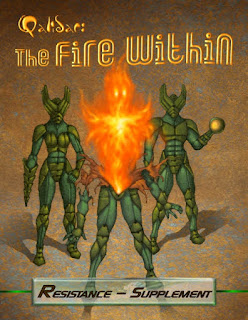 I had almost given up on this one. A while back, I decided that, instead of working towards a big "complete" Qalidar book, I was going to continue to expand on the Basic book. The first order of business, naturally, would be to add in the rules that had had been left out, most importantly the remaining level progressions, but also the complete chapter on organizations. I also wanted to give it a theme, because that stuff sounds kind of dry all by itself. Part of my plan for the complete Qalidar book was that the intelligent species would each have their own section instead of being mixed in with the miscellaneous critters section, so I decided to use one of those for the theme. I was always fond of the Stardust, so I picked them.

But, after an initial burst of progress, it kind of languished for a long time. Eventually, I stopped considering it a project I was working on and moved it off to a nebulous, "maybe someday" category.

Lately, I've been feeling a bit more energetic. I'm not sure why that is, or how long it will last, but I figure I'd better do what I can with it. Even so, I had been leaving this project on the back burner -- the way, way, way back burner. Last week, though, I ran into a bit of a block working on something else. Instead of watching TV or taking a walk or something, I dug up The Fire Within and started plugging away.

The next time I get writer's block, I'm thinking maybe I'll do a "monster" book. How bout Qalidar Qritters for the title? Maybe something less whimsical? We'll see.
at 11:38 AM No comments:

I was listening to this song waxing nostalgic about "Dance Hall Days" when it got to "take your baby by the ears and play upon her darkest fears," and I suddenly remembered why I never felt comfortable dancing! It all goes back to some asshole at a junior high social grabbing my ear and whispering about how all my teachers next year were going to be Burgess Meredith.﻿
at 11:27 AM No comments:

I dumped the G+ comments option and went back to regular Blogger comments. It's unfortunate that the comments made while it was in G+ mode got dropped, but oh well. It just didn't feel like it was worth the fuss.
at 2:01 PM 2 comments: