Remember me talking about the Blackridge setting and the series of short novels I had in mind for it? No? That's okay. I was thinking about it the other day and rattled this out. If you want to find out a little more, click that link and scroll down past this post. 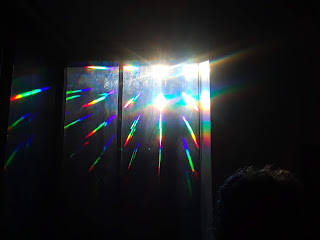 Lyssa checked the clock for the first time since‭… ‬okay,‭ ‬thirty seconds ago.‭ ‬The storm was almost here.‭ ‬She adjusted Professor Gathright's expensive lens array and looked at the sky.‭ ‬Glowing green and red wisps were already sliding across the horizon.‭ ‬In the grooves of the carved circle and its inscribed triangle,‭ ‬orange salt flickered with more than reflected light.

The crystal lenses lit up as the solar flare illuminated more and more of the sky. The electric lights around her surged with the induced current. One of them popped but the others, chosen with this phenomenon in mind, held up. Lyssa made some adjustments to the array and watched the triangle.

She gasped as a pale blue, almost invisible, flame sprang up from the concrete floor inside the triangle, rising to a height of six feet before thickening to a foot or so in diameter. Much as she wanted to see this, much as she trusted the work she and Professor Gathright had done, she had never really expected it to work. The fire shifted to a deeper blue and tightened into a human-like shape.

Electricity arced from surface to surface. Lyssa could feel the charge tingling in her skin and lifting her hair. The lights flared and faded, but they were unnecessary now. The fiery figure in the triangle grew unbearably bright. Before she had to avert her eyes, Lyssa saw its head tilt back, as if it were looking up through the lenses.

Something grabbed her head and turned her face irresistibly back to the shape of fire. She squeezed her eyes shut and tried to raise her hands to cover them, but her arms wouldn't move. The light burned through her lids, first red, then white. She begged. She sobbed. She screamed.

When the phantom hands released her, Lyssa collapsed into darkness.
at 8:20 PM

Email ThisBlogThis!Share to TwitterShare to FacebookShare to Pinterest
Labels: Blackridge