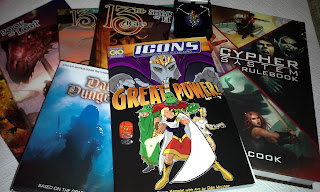 I'm not doing RPGaDay this year, but I'm still allowed to blog about games a little bit, right?

I bought some new games at Gen Con, and took another look at a couple that I bought last year. This has got me fiddling with my options again.

First, the easy ones. Icons rocks for super-hero gaming. Nothing else I've tried for that genre has been anywhere near as much fun. I'm sticking with that. Doctor Who: Adventures in Time & Space is an even easier choice for Doctor Who. And yes, Doctor Who is a genre.

The Vortex System (the one behind the Doctor Who game) is great and potentially useful for lots of genres. I've tried branching out with this a few times, though, and a funny thing happens. I start putting together the pieces of whatever mini-world I'm building, and I think, "Here's something cool from the book. I'll just re-skin it and use it in the scenario. Ooh, this is nice too!" And so on. Then I look at the pieces I've thrown together and think, "You know, these things would all still work in a Doctor Who adventure." And then that's what I have. Not that another Doctor Who adventure is a bad thing; it's just not what I was going for.

I've been thinking a lot about horror/paranormal stuff. Qalidar and Call of Cthulhu are fine for that, but both lead to issues similar to the ones I have with Vortex. That doesn't bother me so much with Qalidar. The problem there is that thinking about my own game makes me angry. Maybe it's because I'm still not done with the damn layouts for the second book, or maybe it's the similarly-premised settings or similarly-pronounced names that popped up after I put out the first installment, and are still popping up now. Maybe it's something else. I don't know. Whatever it is, it sours the preparation experience, which should be part of the fun.

Both Crawlspace and Stay Alive! would work. I've been in some great sessions of these games, and would gladly recommend either of them to anyone looking for a good dramatic horror or modern adventure game. Neither really sings to me as a GM, though. I can't explain it. Too close to home, maybe.

What's looking really good to me now is the Cypher System. Easy to walk people through, versatile, and focused more on speed than making every combat mechanically distinct, this looks really handy for convention games and sounds like a great match for my GM'ing style. The fact that it's a generic system also lets me do a variety of one-off scenarios without switching gears rules-wise. I'm not sure it's a great fit for four-color super-hero gaming, but I've got Icons for that anyway. I could even see using it for a lot of the medieval fantasy ideas I've got. For D&D style "elves & half-orcs kill a buncha monsters" gaming, though, I might still want something closer to the source.

And that's where much of my waffling occurs. I mentioned recently that I had been looking hard at 13th Age and liking what I saw. I think the easy monster generation is aces. I like how you put points into background choices to give you a nebulous skill system that still provides strong guidance for deciding what a character is likely to know. I like that moving combat along quickly was a design goal. And I like lots of other stuff. The people behind it have also put out some interesting, creative supplemental material which gives me all kinds of ideas, which in turn makes the thought of running a game exciting.

Also, though, there's 5th Edition Dungeons and Dragons, which I've already praised on multiple occasions. I've also run it a couple of times, and found it brilliantly adapted to my purposes. It somehow manages to both feel like the game I remember playing, and have much cleaner, more sensible mechanics. I can go portable with the basic rules, or go all-out with the complete game, or go halfway between. And it's really pretty.

The great thing about these choices is, the only drawback of picking the "wrong" one is that I might have slightly less fun than if I picked the "right" one. Slightly. It's possible, I suppose, that the ideal would be to run 13th Age for some monster-bash games and D&D for others, but, since I don't have infinite time, I'd rather just focus on getting as comfortable as possible with one of them.

But who knows? Sometimes I blather on and on about stuff like this, talk myself into an answer, then end up doing something completely different. I haven't even played 13th Age or Cypher yet, and you really don't know anything about a game until you've seen it in action.
at 8:00 AM