Raiders of the Dark Nebula 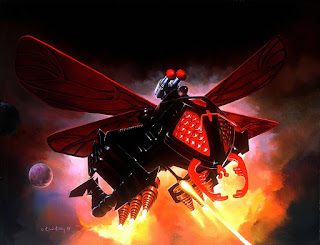 Icons Assembled Edition
Friday, July 31, 2pm-6pm
Promo Blurb: The dust of a dead star-god, the Tenebrous Nebula has sheltered many strange civilizations, but none as relentlessly expansionist as the Dire Wraiths. Since their awakening at the fall of the Ilkani homeworld, these shape-shifting techno-mages have terrorized entire star systems. Take the role of a starfaring super-hero in this mashup of Micronauts, Farscape, Rom, and assorted other space fantasies.

To be fair, the only Farscape reference was the living ship, and the Rom connection (Dire Wraiths) was mostly just backstory. Also, I don't think I even mentioned the Dark Nebula in the game. I didn't really have any idea what I was going to do when I wrote that blurb. It was like January or something.

I came up with basic stats and power sets and let the players come up with names, appearance, and qualities at the table.
Siren, John, and Arok were experimental Body Banks subjects imprisoned and forced to fight in the arena (although John was pretty sure he could escape any time and was staying because he liked fighting). Narly and Trix were trying to break them out because Narly had received a vision or something about one of them being the key to overthrowing the Archon. They had, therefore, allowed Trix to be captured and thrown in with the other prisoners for... reasons. I don't know. I just thought it sounded cool.

When the cyber-tyrannosaur with rocket launchers came out, somebody said this was sounding more like Epic Magazine than a comic book adventure. They downed it really quickly, though, so I probably didn't make it tough enough. Anyway, the breakout proceeded and they fought their way past the armored "angel" guards (ironically, a much harder fight than the dinosaur) to the landing strip, where they were drawn to a big wasp-shaped ship. Trix found that it was particularly well adapted to his people. They blasted their way out, shot down their pursuers, and warped away.

Then they found out that the ship was the result of a larger project the Archon was investing in, using beings similar to Trix's people as stock to create an biologically networked race of cybernetic bug soldiers. At this point the comparisons moved from comic-book style magazines to heavy metal album covers. Anyway, the researchers lost control of their engineered soldiers and fled the planet, accidentally leaving behind the unfinished device which had allowed them to communicate with the network, but was not yet able to accomplish its intended goal of shutting the bugs down.

Deciding that this was what they were looking for, the heroes headed for the planet and found that, as promised, it was overrun by crazed cyber-bug people, some of which had exposed brains, because that's cool-looking. The building that was supposed to have the device in it was covered by a gigantic hive. Trix made some fake cyber-attachments for himself out of spare parts and John transformed himself. It soon became apparent that the bugs were communicating with pheromones and would not allow either of the imposters through, until John duplicated this ability as well.

After some tense experimentation, John and Trix fired up the machine, made contact with the bionic network, and guided it towards a more advanced level of functioning. Also, they led the horde of vengeful cyber-bugs back to the Archon's world, overthrew him, and took over.