Review: Romance of the Perilous Land 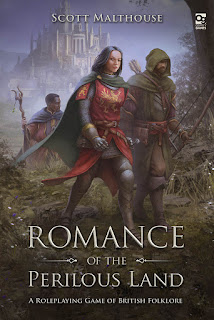 Romance of the Perilous Land is a beautifully illustrated and practically laid-out game set in a synthesis of British fantasies including not only the familiar Arthurian tales but less well-known (at least to me) legends and folktales.

The rules are likewise a clever synthesis of systems, including old school D&D-ish stuff, Fifth Edition D&D features like backgrounds and edge/setback (advantage/disadvantage), and a few things that remind me of 7th Edition Tunnels & Trolls. Of the pieces I didn't recognize, I'm not sure which are his own invention and which came from other games I'm not familiar with. In any case, piecing all those components together into a coherent whole is every bit as much of an achievement as making all the rules up.

I love the magic. Items range from homespun charms to rarer enchanted items like the hand of glory, to unique legendary artifacts. The spell-casting system works kind of like the way I always pictured the old school D&D system working. Instead of the somewhat absurd memorize-forget-rememorize routine, the idea is that, in preparing a spell, you're making a special charm, which you then use to cast the spell quickly on the spot. Malthouse has rebuilt the system around this concept instead of just changing the chrome. I'm too lazy to go into more detail, but it's really cool.

The magic (especially the spell list) is one of the things that makes me think this system would work well for Middle Earth in addition to the setting provided. I'm a little torn on whether I'd want to do this, though, because the Perilous Land setting is great, and one of the main reasons I bought the game. One drawback, though, is that there's no map. Maybe this was intentional. After all, folklore almost never gives you a map, just "beyond so-and-so" or "many days' ride" and stuff like that. I would still kind of like to have one.

I'm not sure about the spell names, either. They're atmospheric, but long. Seems like writing them down in stat blocks multiple times might get old. I dunno. I haven't tried it yet.

The setting is, as I said, a synthesis of Arthurian myths and other legends. In melding everything together and making it his own, Malthouse takes some liberties, but that's inevitable and I like the result. In addition to locations, the book provides factions, major characters, gods, and a bestiary that I can't wait to put to work.

This game looks like all kinds of fun to me. Right now it's like half price on Amazon, too.

Full Disclosure: I've known Scott online for several years and helped publish some of his earlier work.
at 4:26 PM