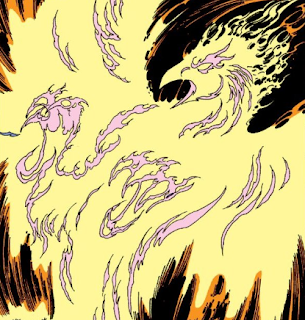 "There’s this emperor, and he asks the shepherd’s boy how many seconds in eternity. And the shepherd’s boy says, ‘There’s this mountain of pure diamond. It takes an hour to climb it and an hour to go around it, and every hundred years a little bird comes and sharpens its beak on the diamond mountain. And when the entire mountain is chiseled away, the first second of eternity will have passed.’ You may think that’s a hell of a long time. Personally, I think that’s a hell of a bird."

Starting off the year... ugh. January is like coming out of an amusement park and realizing that your car has been stolen. A big thing early on was trying to get a better hold on my time. Backing away from Facebook helped some. I also found new ways to sneak in writing time at work or wherever. Anything to turn that post-holiday slog into something better. It paid off in more progress on The Nameless Way and a brighter outlook in general.

The Scrap Pile campaign wrapped this year. I think Curtis and Tom might try picking it up, but this year Tom's prequel was the only move in that direction. I didn't set out to end the campaign. I love the Scrap Pile. I had plenty of ideas for more scrapventures, although the heroes and their antics were starting to feel a little stale. Stuff just came together, though. A long-running plot (not even mine, for the most part) ended in one character's death and a lot of post-betrayal bad feelings (in-character, not real world). It just felt right. At first it was just a hiatus to make way for a new team but eventually I decided it was over.

Partly, that was because of my new most bestest thing, Defenders. It was originally just going to be a one-shot for Carnage. Despite having re-watched everything and taken copious notes, I was a little nervous about doing justice to the shows and to a real-world setting I've never even visited, so I ran a playtest first for some friends. I had a great time. Charlie and Kyrinn were game to keep it running, so run we did. 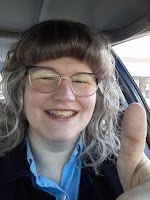 Glasses: After years of slogging along with readers, I finally got prescription glasses with progressive lenses this year. It may not sound like the sort of thing that's worth mentioning, but it made a huge difference to me. I'd almost call it life-changing. Everything is so much easier.

Escape: City of Heroes is back! It's in the form of a bunch of quasi-legal third party servers, so I have no idea how long it'll last, but for now I can play the game again with a whole swarm of other people, and that's been great.

Facebook: Eventually I missed hearing what my benighted friends were up to so I created a new Facebook account and deleted the old one. I still refuse to use Its messenger or even keep the FB app on my phone. I'm not happy about feeding that monster, so I'm trying to limit my contributions. Apart from a comment here and there, I avoid adding content. I post a lot less on FB than on MeWe or Twitter. Anything substantial on Facebook appears only as a link to somewhere else (whereas I even post complete blog entries on my MeWe page). There's almost certainly an algorithm to make sure the posts of people who do this are never seen by anybody, and Facebook users are conditioned not to click external links anyway, but fuck it. And of course I avoid using Its peripheral services or liking anything from a page that doesn't belong to me or one of my friends. I'm under no illusion that anything I can do will impede Facebook in any way, but that doesn't mean I have to help It. 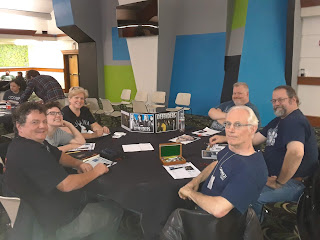 Conventions: I didn't go to Gen Con this year. That was really just because of dayjob bullshit and a long trip I had to take. I didn't want to cancel and I missed seeing all the people I usually hang out with there, but it turned out to be kind of nice skipping all the hassles, so I'm planning to skip next year too. I did go to Carnage and had a great time. The Defenders event went over well. The others were all right. And of course there were friends I hardly ever get to see and there was booze to drink. And I love that resort. I also went to BASHCon, which is always a laid-back good time.

Maggie's Farm: Oddly enough, there's a little bit of game publishing news. I'm slowly pecking away at a compiled edition of the three Qalidar books that organizes everything in a friendlier way and might include a few extra bits. My pace on this is very leisurely. I just pick it up whenever I can't decide what else to do. I might even finish it before I die, but if you're looking for odds, your money would probably be better invested in that flawless blackjack strategy your uncle told you about.

For next year? Keep waking up. I feel like I actually got somewhere this year and I mean to celebrate it, but I've still got a ways to go. Keep sneaking off to write at work. Stay aware of things that screw with my head and waste my time. Either manage them or dump them. Don't let people derail me and drag me into their agendas.

FINISH THAT BOOK AND START ANOTHER ONE!