Alison Blaire (Dazzler), worried about her safety after having tangled with a local mobster, hired Jessica Jones to protect her at her performance for retro night at The Plank, a run-down club on the 41st street pier. Danny Rand (Iron Fist) had been tracking a red motorcycle which had been seen at several arsons across the area. He found it outside an old warehouse next to The Plank. Ali's set and Danny's surveillance were interrupted by a thunderous explosion which shook the building. 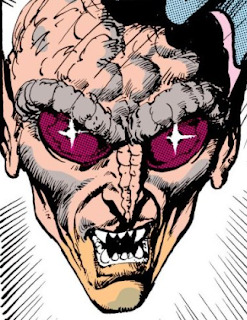 Jessica ran out to see what was going on while Ali made sure the audience and staff got out of the building safely. Danny saw a man in a sci-fi looking costume with tubes and stuff (Flame) running out of the now-burning building towards the cycle and shot it, blowing it to pieces. Jessica, looking from a higher vantage point, also saw four people running off in the other direction. While Danny fought Flame, Jessica ran into the building to see what was going on. She found Trish Walker fighting with some sort of mutated human. Putting aside her surprise for the moment, Jessica took hold of the man and led both of them out of the building.

The man said his name was Marcus Daniels and he had been abducted by a Doctor Abner Croit and experimented on with genetic material taken from enhanced humans. Trish revealed that the same people had a deal with private security contractors at The Raft to experiment on powered prisoners. As part of this deal, she and others had been taken off-site to locations like this. Jessica agreed that, at least for now, she couldn't send Trish back to that.

While everyone was comparing notes, the police arrived. Trish slipped away before they saw her and watched from the shadows. A bunch of uniforms showed up, along with Detective Costa. Some of the uniforms had funky taser-looking devices. One of them muttered, "We don't have to be afraid of your kind anymore," to Jessica. The police arrested Daniels and "Flame" and asked the others to come in for a statement. From her outside vantage point, Trish noticed that a sphere around one car (the one Daniels was in) was getting darker.

Jessica managed to hang back and talk to Trish. While the cops pulled away, they saw the car with Daniels in it rust to pieces. Daniels got clear and looked like he was about to attack them, then screamed and shriveled into a mummified husk.

After the police interviews, they did some detective work separately and then got together to investigate Doctor Croit, They went to his apartment in the Chelsea, where Jessica figured out his password (SelfishGene) by looking through his book collection. She found some information about his employers, Cross Technological Enterprises, ("Where tomorrow begins today") and several emails from the Director of Environmental Compliance, William Cross, that just said things like, "see me" or "we need to talk now." Danny found a key with a handwritten tag that said, "Rudy's." On the way out, they spotted some cops watching the area, so Trish slipped away and stayed in hiding for the rest of the night.

At Rudy's they had a few drinks, ate some free hot dogs, and tried every door in or next to the bar, but the key didn't fit anything. Eventually, they noticed the old building across the street with the art deco entrance and the top three stories that looked abandoned. The key fit there. As they were entering, a Jessica was shot from behind. She told the others to go on while she dealt with the sniper.

Jessica spotted him withdrawing from edge of a building across the street and leaped to tackle him. She noticed once she got close that nothing near him made any sound. After a couple of acrobatic throws and some of punches, Jessica took The Silencer down.

Meanwhile, Danny and Alison proceeded into the art deco building. They pressed five in the elevator and, near the top, started feeling a little dizzy. When the door opened, a man wearing a skull mask said, "Senior Muerte welcomes you to your doom!" Their last thought before passing out was that "Senior Muerte" was a terrible name. 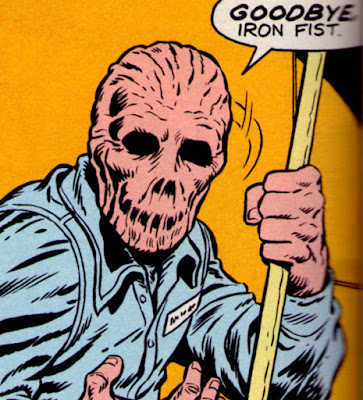 They woke up in a concrete cell. Danny's guns and Alison's radio were missing. A monitor screen lit up, showing Senior Muerte, a man in a business suit, and four armed guards. The suit identified himself as William Cross and bragged that he had taken Alison's "light show device," along with the guns, so she was powerless. He also said they were about to be the final test of Project Undertaker.

He checked a comm screen and turned to Muerte. "Montoya, the other one is here. Get down there and take care of her." Cross flipped some switches on a panel and a low rumble spread through the room, buzzing in their skulls. Danny and Alison began to feel inexplicably angry at each other.

Jessica, arriving in the lobby and noticing that one elevator was on the fifth floor, hit the call button, then opened another one across the hall pushed the five button, and stepped out before the doors closed.

Meanwhile, Alison, recognizing that Cross was using a sonic weapon on them, started absorbing the sound, negating its effect. She used the energy to laser through the door and escaped with Danny. They followed a tunnel to a stairway and found themselves backstage in an abandoned theater. They found Danny's guns and Alison's radio in the work room. After wandering around a bit more, they got to the stage, where there was a bunch of equipment set up. Cross and some guards were there. Alison dazzled the lot of them, but Cross activated something on his chest and suddenly revived, eyes glowing. He picked up one of the obviously heavy machines and threw it. They dodged, and Danny used the Iron Fist to wreck Cross. Then they tricked Muerte into returning and ambushed him.

They took the villains to the police and had a nightcap at Rudy's.