BASHCons and Wobbles and Facebooks! 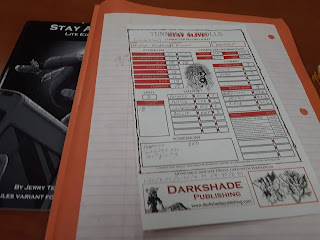 BASHCon was this weekend in Toledo. I had fun hanging with the usual group. The organization was kind of a mess, but you know... BASHCon. I helped run part of Jerry's giant Keep on the Borderlands event and had a great time playing in Tom's Stay Alive game. Tom provides a bit more detail about the trip in his blog.

I helped Tom put Wobble together. I'm still helping actually, because the print version needed one more update to get it ready for distribution. Hopefully it'll go live soon. The PDF has been doing well.

I deactivated my personal account on Facebook. I'm calling it Operation: Faceblock. I just kinda started to think that Facebook was not the best thing for my mental health. I have some ideas why that might be. For one thing, there's the constant barrage of political and advice memes. I'll listen to anything any of my friends has to say, and I keep up on the news for the most part, but these regurgitated slogan pics don't help anybody. I had gotten to where I was even hiding the ones I agreed with, but it was a losing battle, because that's exactly the shit Facebook wants you to look at (and react to, and re-share). And then there's all the stupid little things it's constantly nagging me about. I'll miss being able to easily keep up with my friends, but I don't think it's worth it.

Anyway, what matters is that I'm taking a break to see if I'm right. I'm still on MeWe and Twitter. They don't seem to be as destructive, but we'll see. I'm feeling pretty good about it, so far.
at 11:37 AM