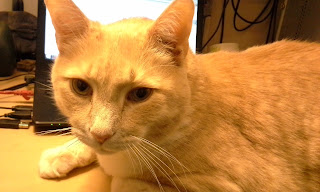 Apart from a few comments about how it's important to me, I don't really talk much about writing. Gaming and traveling always seem like much more interesting things to blog about. On top of that, I don't really like to talk about writing. The really interesting stuff is all in the inner workings of whatever I'm writing. It's stuff I don't feel comfortable putting out there. I'm probably too tight with that stuff, but I can't help it. And the superficial stuff is boring and pretentious. But this time, before I go on with the gaming talk, I've got some writing stuff to talk about. If it's still boring and pretentious, oh well; I tried.

This year, I decided that progress on the novel, while steady, was much slower than it should be. To accelerate, I committed to working at least an hour on Throne of Gorgudai every day (with exceptions for some weekends and stuff like conventions). At least five days a week, in any case. I'm only two weeks in, but I'm happy to say that it's working so far. I even kept up while I was smashed flat by the flu last week. The great thing is, if I worked on it even a little bit the day before, I'm already tuned in when I start working on it again. I don't have to take a lot of "where was I?" time to get started.

And where am I? The main characters, mostly allies of convenience so far, have started to come together more in this chapter. With sections from Seisha's perspective and the current one from Shao Tsang's, I've finally given everybody at least one chance to "talk." They've explored a new town, developed some new tricks, and detected an impostor. They even got to fight a giant shapeshifting eel. And, if you're paying attention, you might find out who killed Kasmordo. Of course, you're not paying attention because you can't, since I haven't let you read it, but anyway. 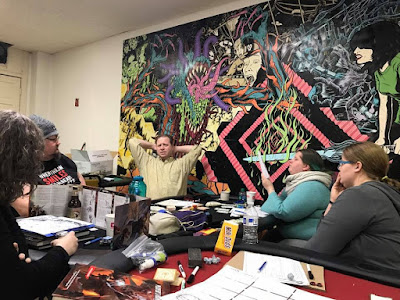 Elvismas 2017 was one of those not-writing weekends. Even though it was in Cleveland and we did all the gaming at Weird Realms, we still got rooms in a hotel alongside the out-of-towners for after-game hangouts.

Beckett ran the first event, Blaspheming Trials of the Goetic Dawn. We played novice magicians applying to become the next apprentice of a wizard. Beckett used his own rules and had lots of neat tricks with language cues and picture cards to let us experiment with spells. We caused all kinds of mayhem and destruction, and even ended up summoning an Old One at one point. Maybe two. I think it actually was two. And that went about as well as you'd expect. I think everybody survived, though. Sort of. Not many of us got out without being turned into demon goats or talking axes or something. 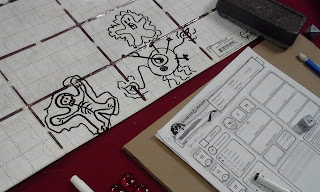 Saturday afternoon (and evening), I ran Demogorgon Girl. Tom had dubbed this "Satanic Saturday" and originally asked me to run something with Orcus. Because I answered, "I've always been more of a Demorgorgon girl," I was given that title to work with. It was his birthday, so I did my best to go along.

The game started abruptly in the middle of a fight with some perytons on the slopes of Mount Ngranek. The heroes only slowly discovered that they were in the Dreamlands and that they were really modern psychics trying to resolve a difficult possession by leading the demon into this sub-reality where it would only be one mad god among many. They were pursued by Demogorgonish monsters (and, at one point, the demon itself) to the Enchanted Wood, where they hoped to take the steps back to reality. They also got to negotiate with cats and zoogs and stuff. The forest had been webbed over by baby-headed giant spiders but they fought (and crept) their way through. 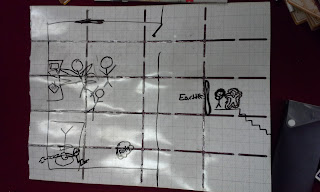 The steps didn't return them to the reality they expected, but they did find themselves back in their real world roles, without special powers and with only a few hit points. They did, however, have moon rubies, little tokens I had been giving out as rewards for good play during the rest of the adventure. Each ruby allowed them to use one special ability from their fantasy selves for one round. They needed these because the girl's sleeping spirit was guarded by her corrupted alter ego. The actual demon had been trapped in the Dreamlands, but they still had to free her from the part of herself that had been tempted. This being D&D, they did that by fighting it.

One of the characters was killed in the fight. Another, particularly enamored of her druidic powers, refused to finish climbing the steps and returned to live in the fantasy world. The rest woke up. Tom was going to GM a game too, but mine had run a little long and he was ready for the after-party, so that was... 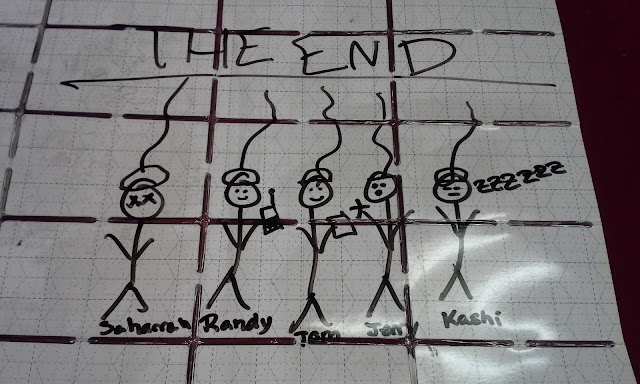