Dipping a Toe Into the Origins Pool 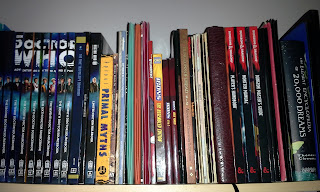 Tom and some of the other Peryton Gamers are going to Gen Con, but they're just going to run a few board games and a giant LARP. Not wanting to get involved with either of these, I've decided to just skip the whole deal. I've got a trip to Hawaii planned that's going to eat up my vacation time, so it's probably for the best. I am planning to try out Origins this year, though. The aforementioned vacation shortage means it'll only be a weekend trip, but that's still enough time to try running a few games.

Doctor Who: Claws in the Clouds
Friday 8:00 PM -- Doctor Who RPG
Above 31st Century Venus, humans living in an aerostat colony have recovered a long-buried zero-steel vessel from the surface. One silurian passenger has miraculously survived in suspended animation and been restored to life. Since then, there have been weird equipment failures and thefts throughout the station. To make matters worse, several groups of citizens have begun exhibiting strange cult-like behavior patterns. A Ninth Doctor adventure.

Dreams of Sarnath
Saturday 2:00 PM -- Cypher System
Despite the weirdness, it's really not that complicated. Enter the alien world that lies beneath all human dreams, swing some swords, sling some spells, and recover an object called a prevestige, which can somehow cross back into the real world. Then all you have to do is wake up and hand it over to Professor North. What could go wrong?