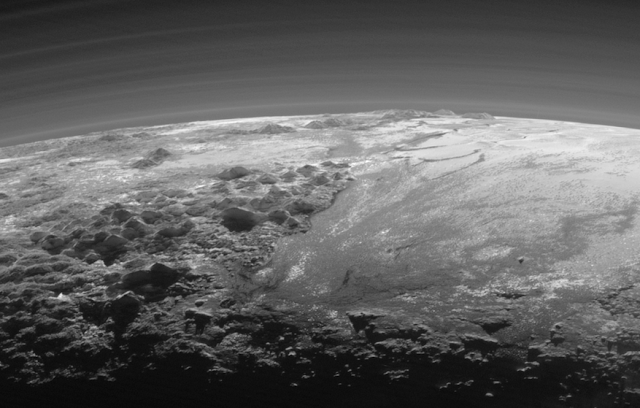 BASHCon always kind of sneaks up on me. This year, I was especially busy with Throne of Gorgudai and behind the schedule I had set for myself, so I really didn't want to stop. I even cancelled one of the two events I had in mind so I could put it off longer. Also, to be honest, "The Nightmare Tree" never did come together the way I wanted it to. Its core ideas just wouldn't mesh. Even so, I barely got my pre-gens for Crystal Rifts done in time and kind of skimped on preparation.

Tom took off Thursday morning to pick up Randy and go to the "Pre-BASHCon Bash" he was hosting. I had to wait til Friday to avoid taking time off work. Unfortunately, Jerry had to bail at the last minute and Paul didn't show up until late, so the pre-BASH gaming didn't happen. 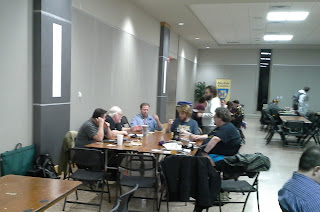 Friday night around 7PM, after defeating my phone GPS's attempt to abandon me in one of Toledo's less savory neighborhoods, I got to UT, picked up my badge, and went to find the crew. They were hanging around one of the game tables chatting. After we talked for minute, one of them remembered to tell me that Tom was waiting at Phoenicia to have dinner.

After dinner, Tom and I both jumped in on Beckett's Crawlspace game, Gimme Shelter. I don't think this one was part of the Jupiter Moon theme. We took the roles of mentally ill homeless people who have to face real horrors from beyond with no help from the world around them. I also got Paul to sign our copy of A Brief History of Gnolls.

I had driven directly to the convention, so Tom & I had two cars to get back to the motel. They took off a bit ahead of me, so I was surprised to find them not there when I arrived. Mystery solved: they had detoured to pick up a late night Del Taco snack. I rearranged my bags for the next day's gaming and dropped off to sleep.

I found it surprisingly easy to get up for pancakes the next morning, after which it was off to the con to check out the dealers and wander around. Nothing much grabbed me this year. I thought about buying some more dice, but none of them really spoke to me. We had a snack (again, Phoenicia) and moved on to my afternoon game.

I had a full table for The Crystal Rifts of Tartarus. Well, sort of. One guy showed up thirty minutes late. After I re-explained the rules and the background just for him, he played for an hour or so, then told me he had to leave because he had another game scheduled. Anyway, this was my test-drive of the Cypher System, and I thought it went really well. GM'ing combat usually gets a bit tiresome for me but, when one of the players rolled a GM intrusion against an almost-destroyed starshadow, I didn't even mind that splitting it into two completely healed ones made the fight last longer. I also had fun playing with elements of Qalidar without worrying about accurately representing any published details. And Pluto. Pluto is cool. Literally. 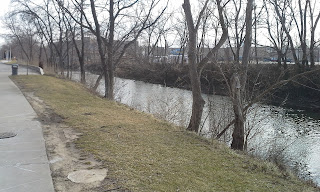 When I made the characters, I had left the equipment for them to pick and I had each of them roll for a random cypher at the beginning. I had been a little iffy on whether or not keeping up a regular supply of cyphers was worth the trouble, but it turned out to be a lot of fun. The initial cypher was a gadget. At the midway point, I also gave each of them a subtle cypher as an "inspiration" sort of thing.

GM intrusions were fun, although I probably should have used a couple more. Stat pools were fun. Simple stats for creatures and NPCs were awesome. Players doing all the rolling was fun. The only drawback is that the book is really heavy. I guess I could try GMing from a tablet, but I don't much like that idea. Still, I think I'm sold on Cypher as a primary vessel for random convention games. Besides being a fun set of rules, it's generic. A generic system doesn't feed me a bunch of assumptions about how the world is put together, so I'm not tempted away from my own inspirations.

After dinner (we're big fans of Phoenicia) and a high-five with the Quitters' Club (Jerry and me, for cancelling events), Tom played to a packed house for his Crawlspace adventure, and I joined Beckett, Jerry, Randy, and Liam for Beckett's Dungeon Crawl Classics scenario, Scream Bloody Gore. This was apparently inspired by an album, with various encounter areas patterned after the different songs. We spent all our time dealing with a village infested with zombifying curse-maggots. We weren't so hot at making friends, though, and had to resort to a charm spell just to avoid being burned alive by an angry mob. 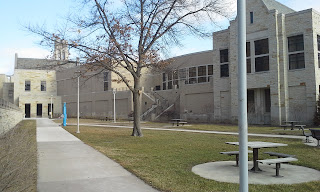 In the morning, I got the surprising news that Tom and Randy were going to go ahead and take off, because of their longer drive. It was weird, after being all bunched up together talking and laughing, to be suddenly and unexpectedly alone. Not that I mind being alone. I crave it, even, but the abrupt shift was disorienting.

While I was still getting ready, I also heard from Jerry, who said he wouldn't be at the con today, either. I packed up, checked out of the motel, and drove to what felt like a creepily empty campus. I was there more than an hour ahead of Beckett's start time, so I took one more turn around the exhibit hall, got some coffee, and found a cozy place to chill. I had my tiny laptop with me, so I started writing. I think I got around 300 words in. Not a lot, but not bad for found time.

I passed Beckett in the hall on the way to get my second giant cup of coffee. Players gathered, and the Jupiter Mining Company Disaster got started. This was a funnel adventure. We each played four characters, most of which were expected to die. The one you end up with, therefore, already has a backstory. It's a mechanic from Dungeon Crawl Classics, but we were actually using Savage Worlds rules. Our characters were all functionaries in a giant corporation who happen to be around when something blows up. I had plenty of real life experience with the characters I was playing, so that part was a lot of fun. I sometimes found it a bit draining to play four characters at once, though. I was a good corporate drone to the end, but everybody else joined the anarchists.

Beckett and I managed to get one more Phoenicia meal in and chat a bit about game systems while the organizers cleared away all the convention stuff. Then we cleared ourselves away for them and it was time to go home.

Update: Beckett and Jerry have blogged about it too.
at 6:54 PM