Gen Con on the Horizon

Edit: That horizon turned out to be a mirage. See next post. And maybe a few after that. Actually, just to be safe, you should probably read the whole blog. 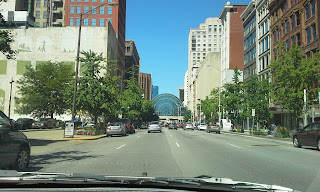 I've got my Gen Con events worked out.

Doctor Who: The Claws of Time
Thursday 2pm -- Doctor Who RPG
Above 31st century Venus, humans living in an aerostat colony have recovered a long-buried zerosteel vessel from the surface. One silurian passenger has miraculously survived in suspended animation and been restored to life. Since then, there have been weird equipment failures and thefts throughout the station. To make matters worse, several groups of citizens have begun exhibiting strange cult-like behavior patterns. A Second Doctor adventure.

Dreams of Sarnath
Thursday 7pm -- Cypher System
Despite the weirdness, it's really not that complicated. Enter the alien world that lies beneath all human dreams, swing some swords, sling some spells, and recover an object called a prevestige, which can somehow cross back into the real world. Then all you have to do is wake up and hand it over to Professor North. What could go wrong?

Dark Light
Friday 2pm -- Icons Assembled
Blackout has left a trail of destruction across Beta City with her weird darkness-based powers. Despite the seemingly erratic nature of the attacks, however, a pattern is emerging.

The Sinking City
Friday 7pm -- Cypher System
All over the little college town of Blackridge, people are being tormented by nightmares of drowning. Not all of them are waking up.

Aqua Teen Hunger Force Colon Roleplaying Game for Tables
Friday 11pm -- Bean RPG
Take the roles of animated fast food products or one of their neighbors in this off-the-rails RPG based on the late night cartoon.
at 8:30 AM

Email ThisBlogThis!Share to TwitterShare to FacebookShare to Pinterest
Labels: cons, Doctor Who, GenCon