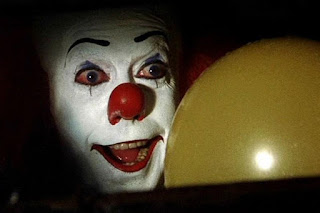 I saw the first incarnation of It (and read the book) as a child. I didn't think I was a child at the time, but I was. I've just wrapped up the new version as an old person. I missed it (or should I say I missed It?) in the theater and had to wait for the digital release, so I made an event out of it. I waited for Tom to go to work, turned off all the lights, lit a couple of candles, and watched both chapters of the recent version back-to-back. I didn't go so far as to re-watch the old one because, for one thing, that's a lot'o watching, and for another, I've seen that one so many times that I could probably recite the lines with the sound off.

One thing I noticed just now while browsing for pictures: The menace of Tim Curry's Pennywise came almost entirely from his voice. Bill Skarsgard's Pennywise is both visually and vocally terrifying. I think a lot of this is down to budget, makeup choices, and special effects, though. I don't want to do too much of that kind of comparison. Okay, okay -- one more: nobody will ever say "kiss me, fat boy" with as much verve as Curry. 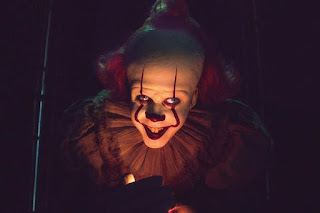 What really made me want to share my rambling thoughts on these movies was a new theme, or an old one I never noticed. The ending in the book and the first adaptation kind of mixed it up, so maybe King never intended it, but it's clear in the new version. I can't remember if the bit about Bill's books never having good endings was in the novel. If not, I think this is why it's in the movie.

Anyway, what I'm seeing here is a story about people reclaiming their identities. I'm not talking about identity as in some kind of racial or cultural bullshit. I mean it in the sense of who they really are. Over time, as we all do, they had lost themselves in faded memories. Even though the effects of that past remained, they could no longer see the source. If you don't know where your wounds came from, you can't learn from them. You can't grow beyond them. This really stands out with Bev, who, escaping an abusive father, hooked up with an abusive husband, and Eddie, who threw off his dependence on his mother's placebo medicine as a child, only to get sucked right back into it as an adult.

Chapter Two spent a lot of time making the heroes recover memories of a time that was cleverly slipped past us in Chapter One. It even went so far as to materialize their past selves as "tokens." And of course the tokens themselves, in the end, had no power over the monster at all. It was having found them, or what they represented, that made them strong. Once they found themselves, they could grow. The more they grew, the smaller their fears and self-destructive impulses became. They were able to get to the heart of their collective Shadow. They didn't simply destroy it, though. Destroying it would be denying that it, too, is part of them, so they tore it up and ate it. Together.