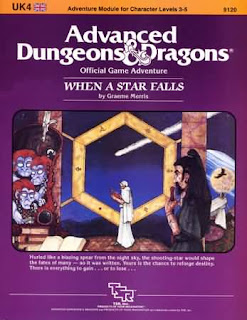 The Nameless Way had been in a bit of a slump, but picked up quite a bit last month. I've gotten up to the part based on When a Star Falls, which is something I've really been looking forward to writing. That adventure leads into their first time travel jaunt in the novel, even though When a Star Falls came after that in the original campaign.

I think I already mentioned that our Icons game is on hold and I'm running the Goodman Games update of Isle of Dread for a change of pace. It's going... slowly. We've only had one session. There was supposed to be a second last weekend... and a few weeks before that, but those didn't happen. They didn't make it to the island last session. I had originally intended to play all the pre-island stuff out, but I've since decided to fast forward through most of it. I don't want this to take all year.

While Tom and I were down with a delightful cold/sinus infection combo, I tried out Audible. Audiobooks are great when it hurts to focus your eyes. It's also something two pathetic sick people can do together. We got through most of Ringworld that way. I'm totally hooked on the service now. Sometimes I even "read" on slow days at work. I'm listening to The Mothman Prophesies right now. 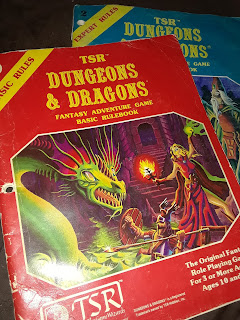 I stumbled across the Kickstarter for Old-School Essentials and was surprised that it was so tempting. I like 5th Edition D&D. I've got a bunch of stuff for it. Do I really want to go back to Basic/Expert, however well it's organized? So I dug up my old books and went through them, kind of ran through stuff in my head. My group didn't really play much B/X before we started on AD&D. Anyway, I decided that yes, I really do want to play this again and I backed the Kickstarter.

Schedule permitting, I intend to go to Carnage this year and run a B/X adventure (OSE if I have it in hand by then), but I didn't have any particular inspiration, so I went back to the DM'ing section and rolled some stuff. For the scenario, I rolled, "Escaping from Enemies," which I've done a bunch of times before and... I dunno. For the setting I got, "abandoned mine," which... okay... I guess. I even rolled the special monsters part using the random encounter tables. I'm planning on using 5th level characters, so I rolled once on the 6-7 table, and three times on the 4-5 table. I got Giant Scorpion, Blink Dog, Hellhound, and Caecilia. It'll be fun to try and make something out of all that.

Not sure what else I'll run. Maybe just Dungeon. Maybe Doctor Who. Still thinking.

Hey, City of Heroes is back! At least for now. Somebody got ahold of the server code and has released it to the public, where these people and probably others are running the game for anybody who wants to play. They've added several servers and it seems to keep running more and more smoothly. I was on last night and didn't get kicked off once. Of course, you never know where this kind of thing will end up. For now, though, it sure is great to be back in Paragon City. 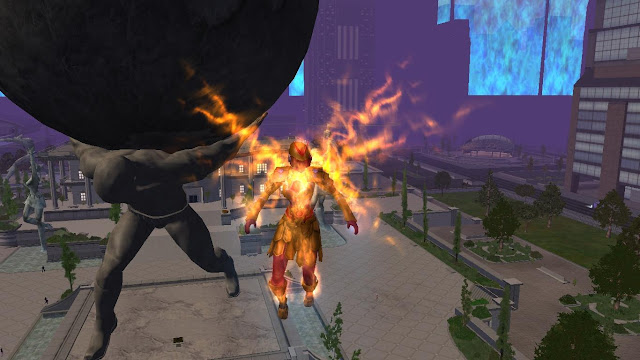