The Qalidar Qritter Qatalog has been released. It'll be in stores in a few months, but you can get it on DriveThru and Amazon now. 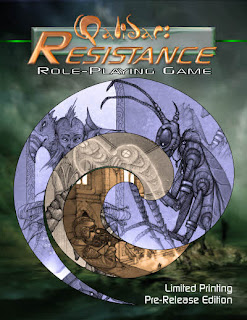 Anyway, once upon a time, there was the 2013 Pre-Release Edition of Qalidar: Resistance. It was somewhat hastily assembled, but it was the complete game as it existed at the time. All the character stuff, all the rules stuff, all the setting stuff, all the monster stuff. My original intent was to build the final release of the game on the same model, and put out a "quick-start" in the meantime, possibly with a Kickstarter once the additional writing was done. Part of this final project was that major sentient "monsters" would each have a profile section with technology, organizations, the whole deal, instead of just an entry under a stat block.

Other stuff happened and I needed to put it all on hold, so I took down the "quick-start" and replaced it with the Basic book. That book is limited to fifth level, but otherwise it's a full, playable game. I figured that would do for a while.

Time passed. I had another idea. I was, by then, certain that I would never want the crowd-funding chain around my ankle. I also had another project going which was much more important, and putting together a big ole game book would be too much of a distraction. The other thing was, I thought it would be nice if the people who bought Qalidar Basic could consider it a step towards the whole game, instead of just a disposable intro pamphlet.

That brings us up to The Fire Within. I figured I could use those species profile sections I was talking about to frame individual supplements. I was also thinking of using them to zero in on pieces of the setting. Anyway, for that one I went with the Stardust. Most of the book, to be honest, is taken up by character-building stuff and expanded rules for organizations. There was a lot of that crunchy stuff that didn't make it into Basic, but needed to be published. It still gave me a concept for the title and the cover, though, and the section that really is about fire people is pretty cool.

I'm not sure I'm ever going to write those other profiles. I don't spend anywhere near as much time on game design as I used to. I still have all the original monsters, though. I put a lot into them, before their book got pushed aside, and they've just been sitting here on my hard drive since then. Some of them weren't even in the preview edition. I always felt like, without all the weird creatures, Qalidar wasn't really Qalidar.

So I crammed all the old monsters and the new monsters into one book and that's what we've got now.
at 10:17 AM