A Lizard Walks Into a Bar 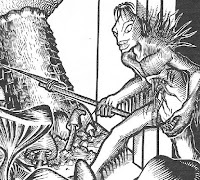 (Two of our gang had to cancel at the last minute, so this was a quickie intro adventure. The character backgrounds for this session and some recent events are at the bottom.) After an awkward meeting in Monmurg involving Tuckras's spirit guides, Jinso had a few drinks and expressed his interest in finding more of his kind. Vyph, fascinated by the prospect of more "tiny meats," was willing to help, and Tuckras, after a brief argument with no one, also agreed.

Asking around, they discovered that a colony of halflings with "a bit of the same look about 'em" had been established on an island out past Fairwind back before the wars. They poked around a bit more, then hired some sailors to drop them off there. They found an overgrown jungle island where, after a bit of exploring, they noticed that small creatures were stalking them in the canopy.

This led to a fight with a bunch of fungus midgets, which they eventually won. Later they found a compound with several sheds and an abandoned laboratory. In the notes, the author wrote about having run out of subjects to "convert" so further research would have to be conducted elsewhere. The prospect of contacting the alchemist, Ferok, in Saltmarsh was mentioned.

They decided to go to Saltmarsh... once they figured out how to get off the island.

In CY 579, the devil-worshipping Overking of Aerdy declared war on several of his kingdom's former vassal states in an attempt to reunify this Empire. This, combined with Rary's betrayal of the Circle of Eight, marked the beginning of the Darkfang Wars, a period which saw the destruction of Geoff by invading giants, the invasion of the Sea Princes, Idee, Onwal, and other territories by the Scarlet Brotherhood, and uprisings from the Pomarj, The Horned Society, and Iuz. The name of the war comes from the curved, obsidian-like knives that proliferated during the period, but utterly vanished afterwards.

The Great Kingdom is gone, its former capitol a fiend-haunted wasteland, but its successors are relatively stable. The Horned Society is no longer a nation, although the order remains a widespread cult. The Scarlet Brotherhood has not been heard from in years. Their former vassals are reforming, with the exception of the Sea Princes, which remains only a tenuous alliance of city-states. Geoff is still mostly wild land, even though the organized invasion of giants was driven off. It's CY 591 now,

Jinso Kuna - Halfling Monk
Jinsokuna Ashi Gosutodoragon was raised at a remote overseas monastery.  According to his masters, he was stranded at the monastery as an infant when he was the sole survivor of a shipwreck.  He was raised and trained -but not respected- by his masters because of his diminutive size.  Hence, his extreme dislike of being called small or tiny.  He left the monastery answering the call of wanderlust and in search of his own people to learn more about himself.  He struggles between his inherited chaotic Kender nature and the structured training of his masters.  He will often speak of the teachings of Master Furui.

Tuckras Grigorrin - Human Cleric/Warlock
An orphan in Ket, Tuckras was raised by priests of Istus, wandered for a while, then settled in the Bramblewood Forest to hang out with the spirit voices that constantly plague him. Then he wandered off again. He is very tall and lanky with fair, almost pale skin. His long, black hair is disheveled as is his long beard. His eyes are a piercing blue. The overall effect is one of wisdom beyond his years, but with, perhaps, a touch of madness. His presence, though, is compelling. He carries a staff that looks suspiciously like a tall bedpost. The globe at the top of the bedpost staff is intricately carved to represent Oerth, and it appears to have some bird's foot and tail feather tied to it.