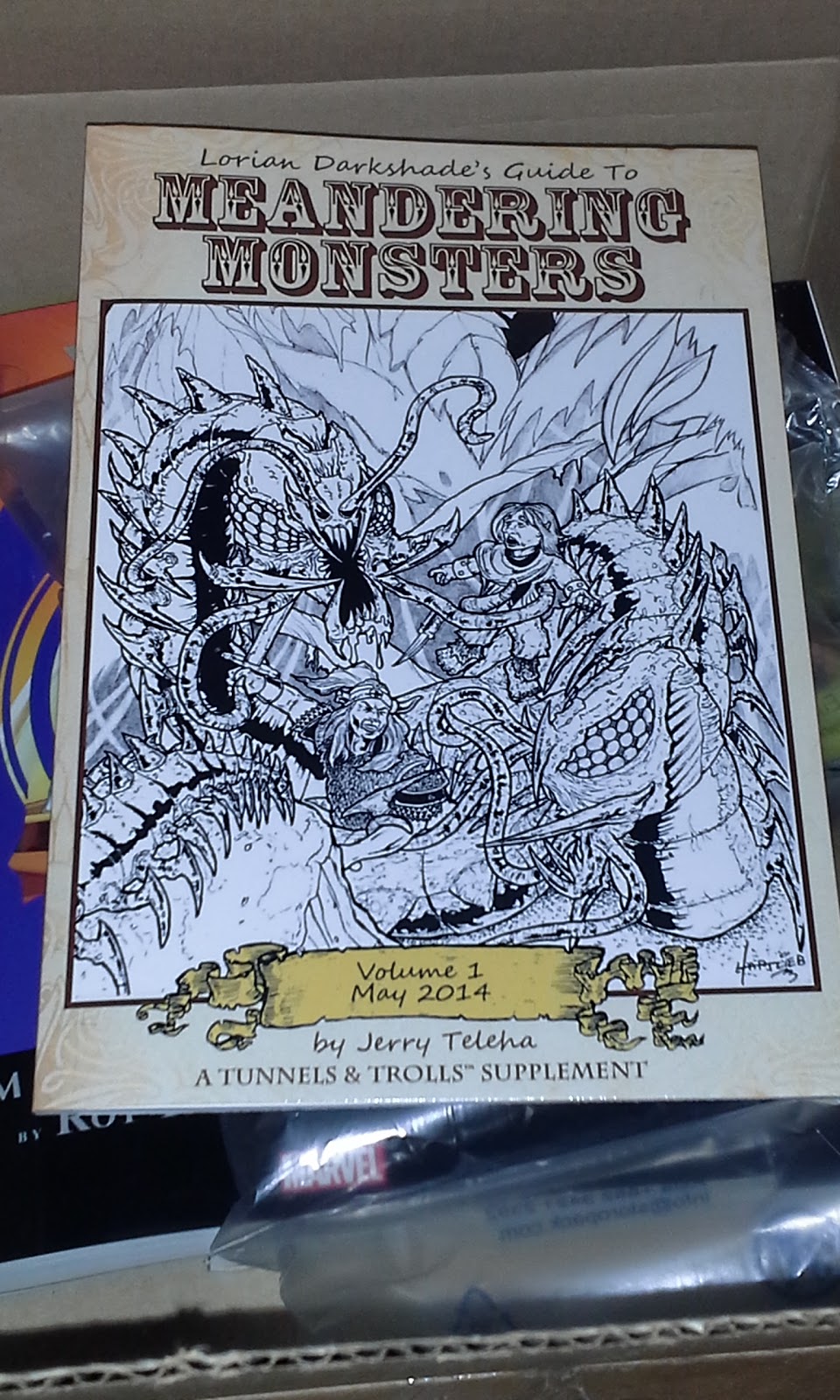 I got this in the mail last week and have since tried everything I could think of, even to the point of compiling and publishing a bunch of my old short stories, to put off the review I promised to write. I hate reviews.

And, of course, you won't take my opinion seriously anyway, because Jerry's my friend. If you have other reasons for not taking my opinion seriously, I'd rather not hear about it. Anyway, maybe some of the stuff I tell you about what's inside will still be useful.

Volume 1 of Lorian Darkshade's Guide to Meandering Monsters contains a few new monsters for Tunnels & Trolls, some scenarios featuring those monsters, and a small assortment of magic items and spells. Each section is introduced with a vignette about an encounter with that creature, narrated by the eponymous Lorian Darkshade. There's also a map showing a small section of Jerry's campaign world.

The art by Mike Hartlieb is excellent. He's a friend too, though, so... yeah, more bias. Here, just look at the cover. If you like the cover, you'll like what's inside. There's also some of what I think is clip art, which is professional-looking and fits the tone of the book.

When I first opened up the book, I was disappointed that there were only three monsters (five if you count the sub-categories of the lizard man entry) but that's because I hadn't thought about what the real goal of this book was. It's not a "monster book," really. At least, it's not the kind of monster book most RPG'ers are used to. The monsters themselves aren't really the point here. What he's really providing is an assortment of cool ways to use those monsters.

In Tunnels & Trolls, all you have to do to make a monster is pick a number and give it a name. Here's an example: MR 75 Gleipichtorger. There, I'm done. That's a new monster I created just now. Of course, any halfway competent GM will have other details in mind, and the current edition of the game also offers "spite effects," which... okay, I don't want to explain all that stuff. Doesn't matter, anyway. The point is that, more than any other role-playing game I've encountered, T&T relies on very basic stats combined with improvisation to make its monsters come alive. That can be an advantage. If I'm used to decompressing my stats from that one number and, in the middle of an adventure, I invent the gleipichtorger, I can toss that sucker right in without missing a beat.

On the other hand, it doesn't give you much in the way of inspiration. Sometimes you're trying to throw something together, you're busy improvising everything else, and you want some creative stuff that's already been fleshed out. That's what you're getting here. For one thing, Jerry has done all the math for you. All the numbers that you would normally derive from that MR have been included in the entry. He's also included spite effects and added his own mechanic, triggered disadvantages, as well.

More than that, though, the vignettes give you a feel for how delvers might perceive these creatures, and the adventures give you a feel for how they might fit into the world. Even if you don't use any of that stuff directly, it's the kind of thing that makes the creatures come alive, and fires up the kind of the daydreams that turn into adventures of your own. Sort of "imagination fuel" I guess.

Speaking of imagination, what you need to do now is that imagine that I have artfully summed up this article here, perhaps even offering a final insight that challenges your entire worldview. Remember, you're really impressed with this post.

Get your copy of Meandering Monsters here:
at 11:21 AM