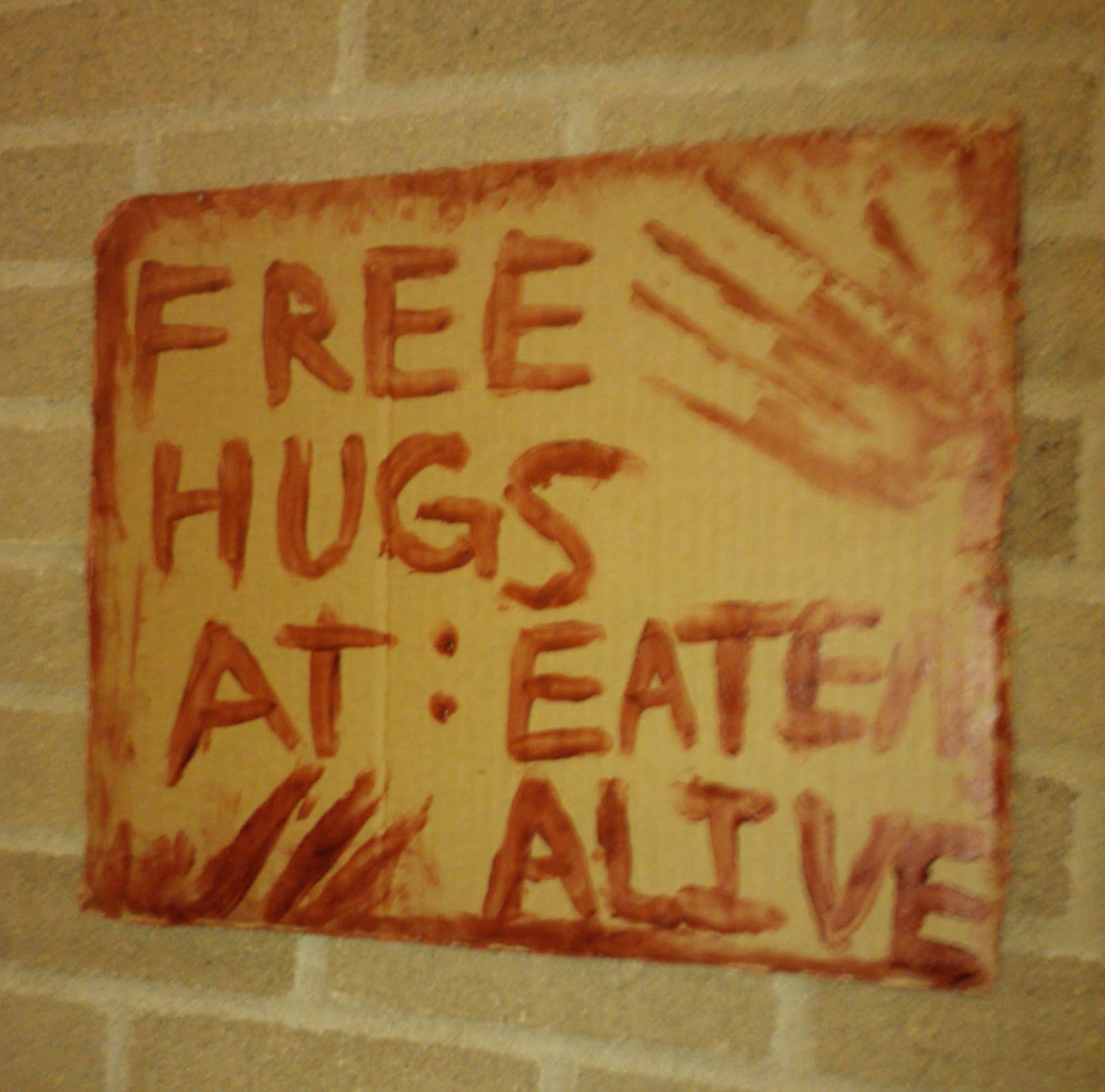 BASHCon was fun. I got in on some great gaming with lots of familiar faces and enjoyed a relaxed atmosphere with nerf-gun soldiers and zombies wandering around. I needed a weekend like this.

...except for the part about forgetting my camera and having to fall back on my phone for the whole trip. That's why some of these pictures kinda suck. 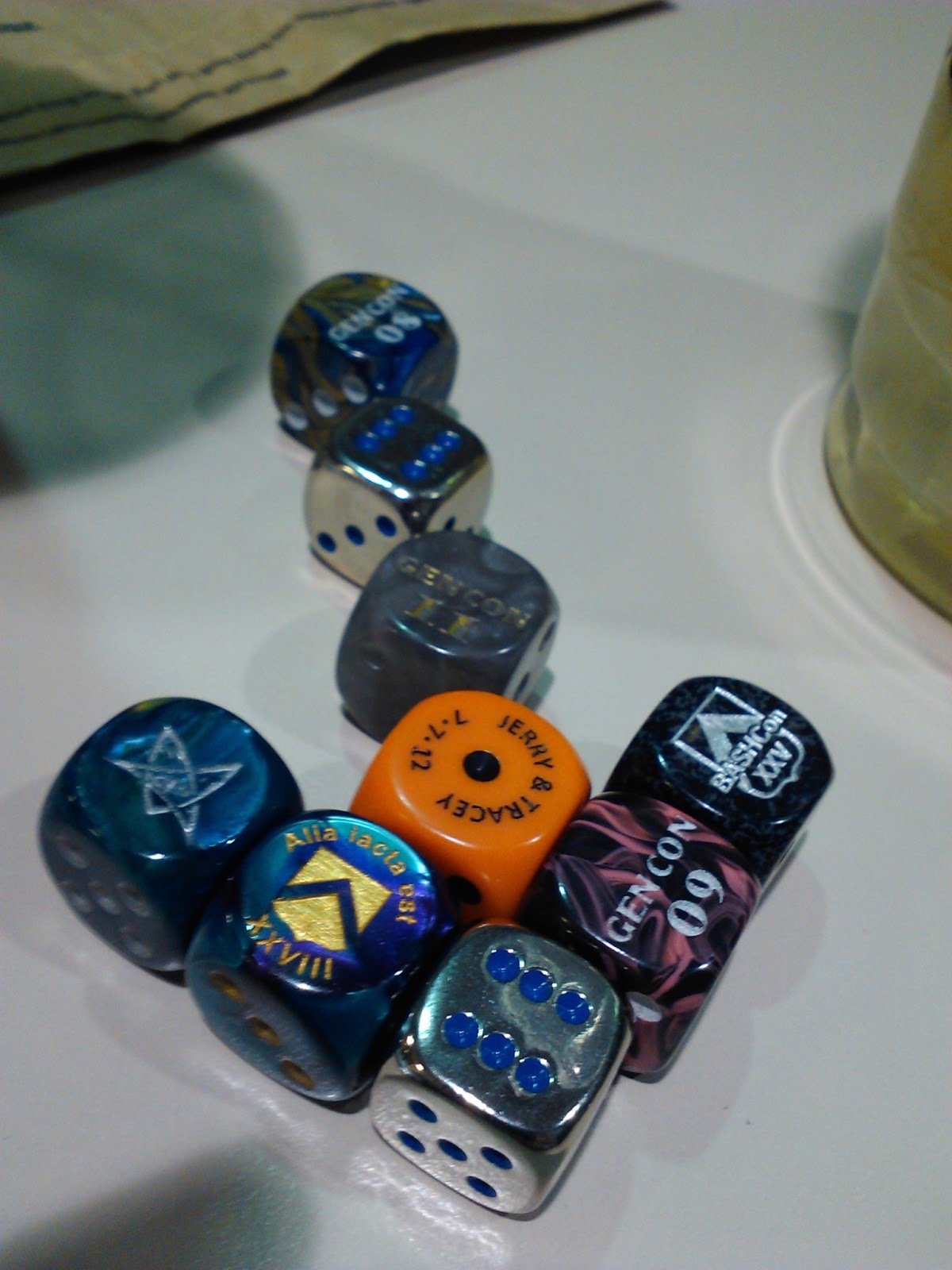 Friday
A quick bit of packing and a fairly short road trip to Toledo, and we were unloading the car and crossing the creek by the UT Student Union before we knew it. Tom called up Ken (did I mention Ken? I'm sure somebody did but, long story short, Ken St. Andre was there as a special guest) and found out that we weren't going to have an exhibitors' table after all (again, long story, not very interesting). I was, I admit, relieved. I had never been convinced that selling here would be worth it, and this would leave a lot more time for enjoying the con. 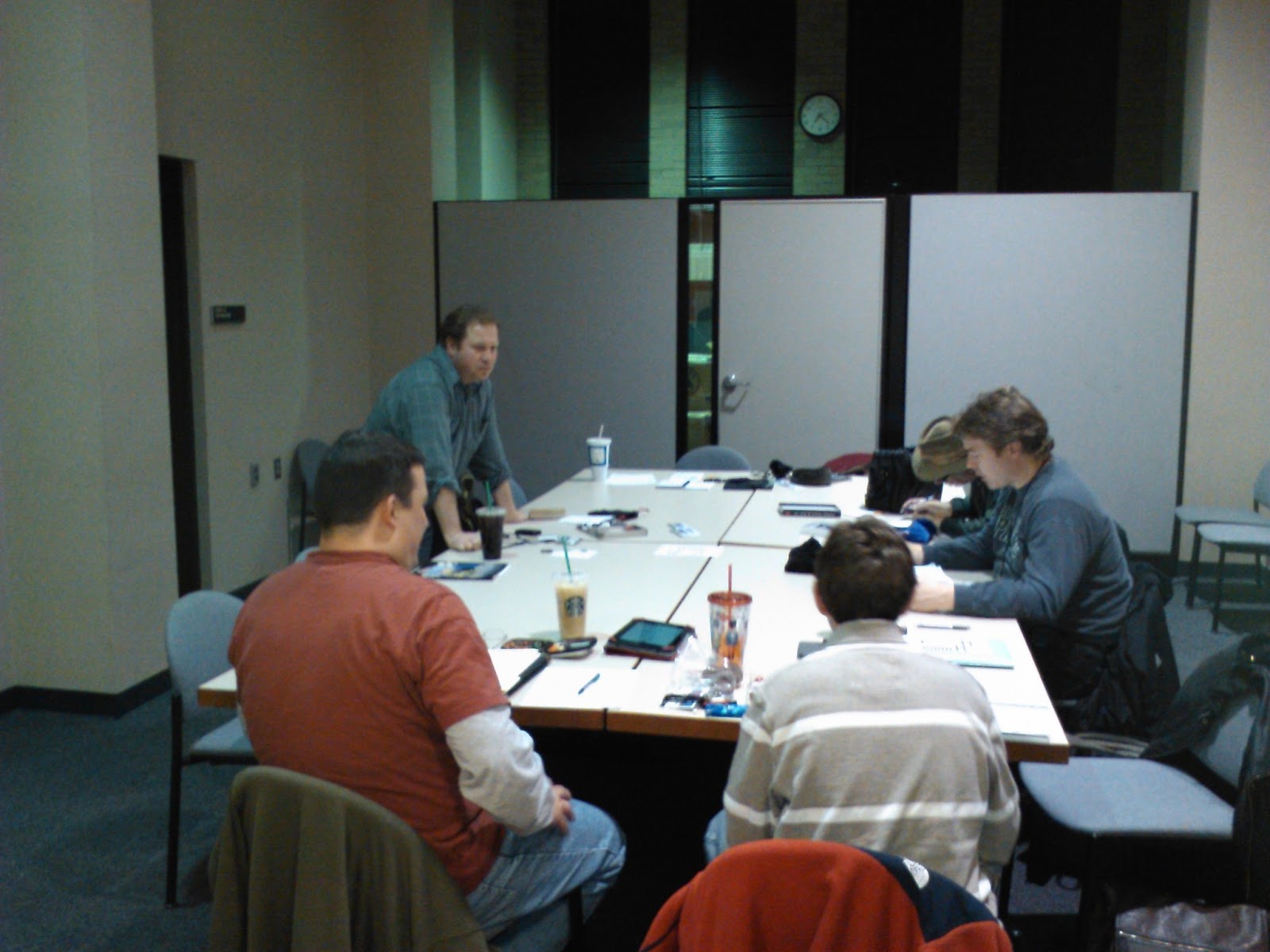 Anyway, we found Ken and chatted a bit in the registration line. Tom ran off, muttering something about not wanting to lose any more fingers, and came back with fried mushrooms and cheese sticks. Somehow we got separated and I overheard BASHCon people frantically looking for Ken. I thought Ken would probably be with Tom, and I knew Tom would go where there was beer. Sure enough, I found them at Phoenicia. Turned out that the BASHCon folks thought Ken was running Tom's T&T game, Lair of the Snow Dragon. I'm guessing that's why we got the awesome private room with four tables. Tom took me, Jerry, Liam, Alex, Ken, and Paul through the hills and a newly-marshy valley (after an eternity spent talking Ken out of attempting to make some kind of marsh-snowshoes out of scrub brush) to a cave in a big rock formation where Alex charmed some fairies with his singing and Ken talked to the dragon.

After the game, several of us met up for a late night snack & nightcap, then went back to our respective hideouts to crash. 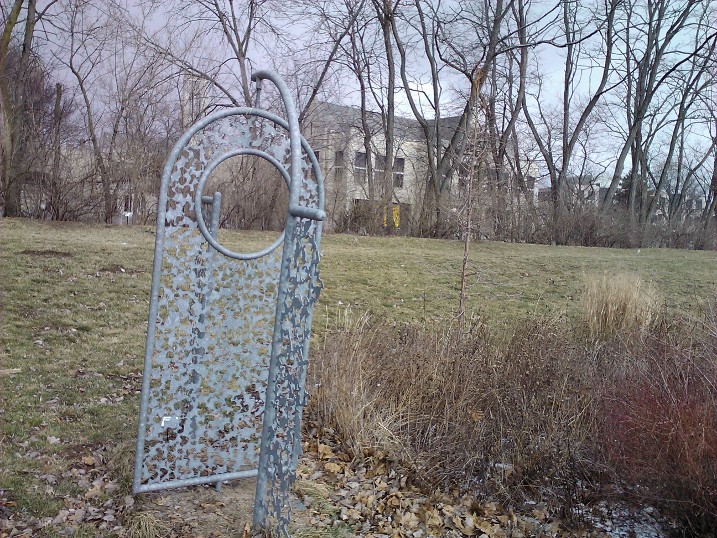 Saturday
Tom got a ride over with Alex. I slept in a bit and delivered Ken to the convention. Jerry's zombie game was still in progress, so Ken and I played Magic. I never think to to bring a deck. I imagine my poor old collection is pathetically outmoded by the super-science of modern munchkinry, anyway. Luckily, Ken had a spare, and it was a killer. The man knows his Magic cards.

Over lunch at Phoenicia, I found out that I had been eaten by zombies in Jerry's game. I played in the one last year, so I guess my character's absence needed to be accounted for. Ran into John from previous Peryton RPG and Gamma World adventures, and put together quite a large gathering, Good food, good conversation, blah, blah, blah, I know - you don't care. 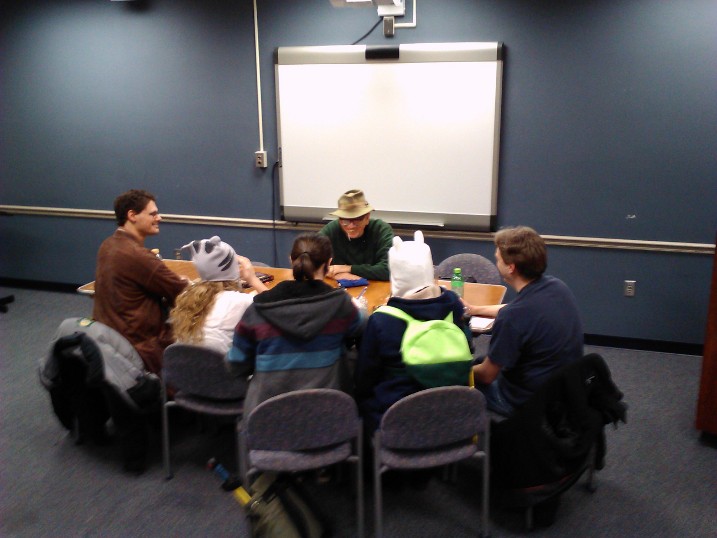 So anyway, Ken did a couple of T&T seminars in the afternoon. His hat stuck around to pimp the merchandise when he stepped out. Tom, Jerry, and I wandered in and out of these and took some time to chill in the cozy student center. I'm not sure what happened to the others. I'm sure they had stuff to do. I took a few turns around the exhibit hall, toyed with buying an Eclipse Phase book, a 20-sider that lights up when you roll a 20, or a piece of steampunk jewelry, and ultimately decided that I would have just been buying stuff to buy stuff. I think we popped back over to Phoenicia a few times too. 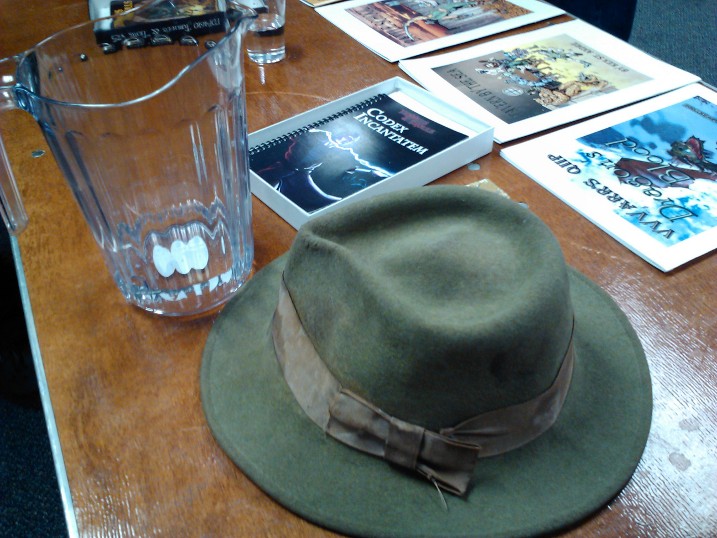 Eventually, evening came around. Tom's massive three-GM Ragnarok event was really filling up. I had a Peryton RPG event at nine, so I had to wander off while they were still making characters. Checking in at the desk, I found that there were only two players signed up for my dungeon crawl, Shrine of the Mantis.

My game was a little off. Part of it was that my heart wasn't really in it, even though I was unusually well-prepared. Also, I only had two players, one of them in an argumentative mood. Normally, I'm pretty good about finding a way to let people do the cool, unexpected things they come up with in play. I'll even bend the rules if it doesn't seem unfair to the other players. It's a lot harder to be open-minded, though, when you have a player who will run over you if you show even a moment's hesitation. I think I even missed some opportunities to use cool options that were already in the rules, just because I was being worn down by anti-d20 propaganda and lectures on the psychology of giant metal insects, and couldn't think past "it's not your turn!" anymore. I don't want it to sound like it was all that way, or even most of it. There were some great scenes. Anyway, whatever excuses I might come up with, I felt bad about my performance, so I gave the other player a copy of the rule book. 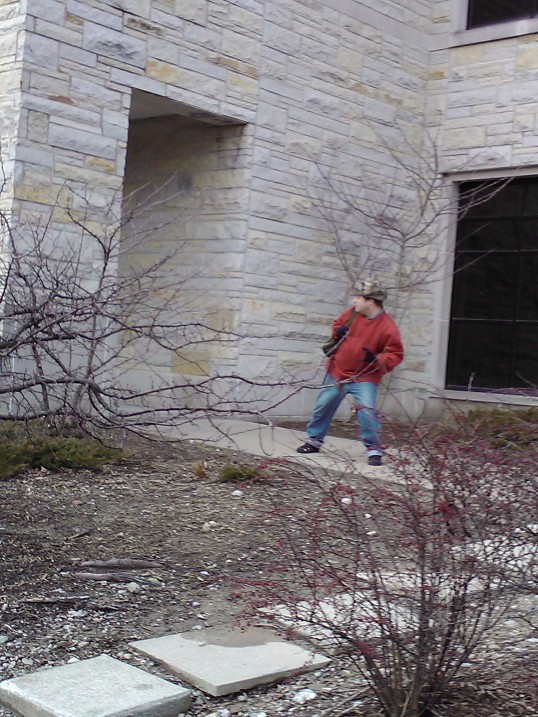 Leaving the common-folk gaming hall around midnight, Ken and I wandered over to the Royal Suite and found that Ragnarok had just wrapped up as well. After a bit of post-game chatter, we headed out. The UT Student Union is a bit of a labyrinth, so we paused to consider the best route. Tom noticed the direction the hall was going and was convinced it would take us where we wanted to go. I remembered the path to the best of the known exits and wanted to go that way. Tom was not to be swayed and, though our trek took us through unlikely nooks and dusty storage stairwells, it ended in a door that opened at the best possible location for us to exit the building. It didn't even set off the fire alarm.

(This picture of the secret exit was obviously not taken that night, but I'm putting it here anyway.)

We said our farewells to Paul, who was on his way out, and then it was time for our traditional Saturday-at-BASHCon treat, late night tacos!

Sunday
Despite the early morning, I was looking forward to Jerry's AD&D game, and it was great. We invaded a slaver fortress, where the Diminutive Death-Dealers (a pair of halfling thieves, one of which was my character) snuck in and took out the wizard while the others fought his giant henchmen. Then the archer got to show off in a fight that ranged across a series of tree-houses connected by raised platforms in the woods, and the barbarian got smacked down. Perfect conclusion to the convention.

Don't Believe Their Lies
Tom's write-ups have become a pain to link to because he insists on posting them in a gazillion pieces, and it looks like Jerry might be succumbing to his perfidious influence. Here's the first installment of Tom's and here's what Jerry has posted so far (and the official one). You'll have to find the rest on your own. Paul has also written up his impressions.
at 5:28 PM